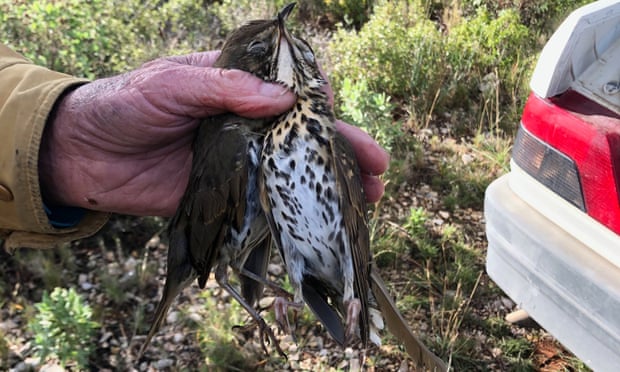 European judges have ordered France to outlaw the hunting of songbirds using glue sticks, a practice described by campaigners as barbaric and a threat to endangered species.

French hunters argued the method was traditional and justified exemption from an EU ban introduced in 1979.

Until recently, the French government had successfully sought an opt-out that allowed glue hunting in five departments in south-east France on the grounds that it was “controlled, selective and in limited quantities”.

On Wednesday, the European court of justice ruled the practice was not selective and contravened EU rules. The ECJ called on France to ban glue-stick hunting of birds definitively.

The ruling was welcomed by French environmental groups. “It’s wonderful news. Now France cannot use the pretext of an opt-out to allow glue-trapping to happen,” said Yves Verilhac, of France’s Bird Protection League (LPO). “The judgment is very interesting because it says that tradition is no excuse for this and that it is absolutely not selective, which is what we knew and argued.”

Hunters using the method paint sticks called verguettes with glue and use caged songbirds to lure birds into the traps. Once the birds land on the sticks they are stuck; the more they struggle to escape, the more stuck they become. They are used as “callers” to attract other birds for shotgun hunters.

The LPO had brought numerous legal cases in national and EU courts over the past 30 years but all have previously failed.

The LPO says French hunters kill an estimated 17 million birds a year from 64 species, more than any other European country. Of these bird species, many of which are migratory, 20 are on the International Union for Conservation of Nature’s red list of endangered species in Europe, including the turtle dove, rock ptarmigan, redwing and curlew. About 1.4 million song thrushes and more than 2 million partridges are killed annually.

In 2019, glue-trappers had permission to catch 42,500 song thrushes and blackbirds, half the previous year’s quota. The French government did not seek a derogation to allow the practice last year, angering France’s 6,000 licensed glue-trappers who claim the hunting method dates back generations.

They reject accusations of cruelty, saying stuck birds are quickly removed and released if they are not one of the species trappers are allowed to catch.

Two years ago, Eric Camoin, president of the Association for the Defence of Traditional Thrush Hunting, insisted hunters filmed by the LPO breaking the rules were in a minority.

“As with any activity there are always those who do illegal things and they should be punished. I am clear about that. It doesn’t mean the whole activity should be banned. You don’t outlaw driving just because some people speed at 200km/h [124mph],” he told the Observer.

Verilhac said the LPO had submitted legal complaints to the EU authorities about other non-selective bird trapping methods in France, including the use of large nets strung between trees.

“Following this ruling we are confident of other successes. These cruel, outdated methods will begin falling like dominoes,” he said.

This article was first published by The Guardian on 17 March 2021. Lead Image: A hunter holds up a dead thrush. Photograph: Kim Willsher/The Guardian.