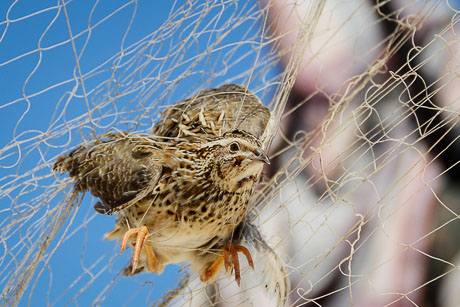 Next month the killing will begin in earnest. August marks the start of the annual migration of millions of birds from their European breeding areas to their wintering grounds in Africa. Many will fly across the eastern Mediterranean towards Egypt, where they will land, exhausted, on a coast along which hundreds of kilometres of trappers’ nets have been spanned to create almost unbroken walls of death on the seaside dunes.

These nets will catch at least 140 million birds this year, according to one biologist’s estimate, more than one in twenty of the migrant birds leaving Europe for Africa. This number does not include those killed along Egypt’s coast by other means: trees shrouded in nets with north-facing openings catch instinct-propelled, southbound migrants before they can head across the Sahara, ingenious shade traps set on the ground snare birds seeking relief from the sun and lime-coated sticks strategically placed in bushes bring birds to a sticky end.

Those birds that make it through the coastal gauntlet into the Western Desert face more danger. Almost every oasis and isolated grove of acacia trees, ‘magnets’ for birds seeking shade and rest during their strenuous desert crossings, is occupied by hunters who shoot at every bird they see, say local conservationists.

“I think it’s very safe to say that Egypt is the worst place to be a migratory bird,” said the bird-loving American author Jonathan Franzen, who visited the country last year to report on threats to migrants across the Mediterranean for National Geographic. “For someone from the western hemisphere, the scale of the killing of small birds is just totally shocking because we really don’t do that over here,” he told me. “It was clear that I was up against a completely different understanding of what a bird was.”

“It’s just like fishing, and we’re not outraged by fishing,” he continued, “by and large we accept fishermen. ‘They’re just fish for god’s sake! You pull ’em out, cut their heads off and you eat ’em!’ And that was really the only way I had to wrap my mind around what I was seeing in Egypt. And in a number of cases they were using the identical nets to both catch fish and then to throw over a bush and catch birds, which really underlined that that’s how it was for them.”

Egyptians have caught migrant birds for subsistence since the time of the pharoahs, but in recent years the intensity of the trapping and shooting has escalated to unprecedented levels according to conservationists I interviewed. Birds are increasingly being killed purely for recreation, and wildlife law enforcement, never strong, has become almost nonexistent in the political turmoil that has enveloped the country since Hosni Mubarak was deposed in early 2011.

A German wildlife TV crew working in Egypt last year estimated that continuous nets lined at least 700km of the Egyptian Mediterranean coast during the autumn migration, the only places not intensively netted being military bases and cities. The Egyptian coast is “the world’s biggest bird trap,” they said, with nets running right through small towns and private gardens. Franzen told me that he saw tourists squeezing their way through small gaps in nets to get from their beach resorts to the sea.

The barrier-like nets erected on coastal dunes are set for common quail flying in across the Mediterranean from Europe. Quail are traditional and legal quarry for Egyptian netters, and although there has never been a strict bag limit, regulations limit the height of nets, stipulate that they be spaced a certain distance apart and that non-target species (‘bycatch’) be released unharmed.

In recent years, as policing has evaporated, the nets have become taller and are no longer spaced apart. Sometimes they’re spanned three deep. New electronic bird calls placed under the nets broadcast recordings of quail song, increasing the catch. The European population of common quail suffered a decline in the twentieth century and no good data exist to quantify what percentage of the population is being caught annually in Egypt, but it’s likely to be substantial. Quail, according to the German TV crew, can sell for as much as five euros each to local restaurateurs, pricing them well out of reach of the average Egyptian and making trapping profitable.

Bycatch species such as shrikes, wheatears and warblers are not released. Their wings are typically broken and they’re transported live and sold for pennies to local merchants, who later slit their throats according to Muslim custom before butchering and selling them. The numbers of bycatch species caught is poorly known because “nobody has investigated this in a systematic way,” says Franzen (the estimate of 140 million birds per year is a simple calculation by the German conservation group NABU based on documented net catch rates in Cyprus, which, like Egypt, is on the Eastern Mediterranean migratory flyway).

Another species specifically targeted by hunters is the European golden oriole, which is known throughout the Middle East as a ‘natural Viagra’, according to Franzen. There are no Egyptian laws restricting the hunting of orioles, which are typically shot as they seek shade and rest in isolated acacia trees in the desert, either by Bedouins who have traditionally laid claim to particular trees or by young men spending ‘guy time’ away from their parents.

Sherif Baha El Din of Nature Conservation Egypt, a wildlife NGO, told me that remote acacia groves had been hard to find and access in the past, but with GPS devices and fast SUVs being easily available to wealthy youth, “now every tree has someone waiting with a shotgun or an air pistol” during migration. There are even fist fights over trees, which can return a tidy profit to enterprising shooters. (Franzen visited an oasis frequented by oriole hunters where he reckoned at least 5,000 were shot in a single year.)

Dead orioles are sold to middlemen who transport them to consumers with sexual problems in the Gulf states, presumably in refrigerated trucks. As with almost every aspect of the bird hunting issue, conservationists don’t understand the economics of and participants in the trade very well.

Although bird hunting takes place on a massive scale, said Baha El Din, a minority of the country’s population is involved and most people know nothing about it. “If you just pick some random Egyptian on the street or in the government, it just doesn’t register with them.”

German video of bird trapping and butchering in Egypt (duration 2 minutes, via NABU)

The important first step, therefore, was to make migratory bird conservation an issue in Egypt and around the world. “We need some pressure combined with assistance,” he told me. Concerned people around the world should contact their local conservation groups and Egyptian embassies to raise the profile of uncontrolled hunting and trapping, because “these are not just Egyptian birds, after all”; the species most affected by Egyptian hunters breed in Europe and spend a large part of the year in sub-Saharan Africa.

The conservation community should take an integrated approach to the problem, he said, combining research and persistent pressure with co-operative action that engages communities and the government, taking care to avoid destructive conflict.

Jonathan Franzen cautioned that overly-strong outside pressure on Egyptians could backfire. When addressing bird-trapping with Egyptians, as he has, “You run up against the substantially legitimate resentment that many Egyptians feel towards the West.” Westerners seen as arrogantly telling Egyptians what to do could cause serious problems, so outsiders should offer assistance to internal groups like Nature Conservation Egypt, he recommended. Even though Egyptian laws make it very difficult for foreigners to support Egyptian NGOs financially, they can help with such items as used binoculars and even moral support, he said.

A nascent Chinese bird conservation movement has recently emerged in the wake of the publication of an affordable, quality Chinese-language field guide to the birds of China, Franzen said. No equivalent, up-to-date book exists in Egypt that would allow locals to learn about migrants, start to watch them and then build a larger community of local birders and bird-conservationists.

“If there’s ever going to be cultural change,” he said, “it’s going to come from Egyptians themselves realising, y’know, there aren’t as many birds as there used to be, maybe there’s a different way for us to interact with them.” Such a change, said Franzen, “is probably going to have to come from the bottom up because the Egyptian population has a very problematic relationship with police and with regulation at this point.

“Unfortunately it’s the long game — and the birds are declining at such a rate that it’s wrenching to play the long game.”
Germany’s largest wildlife conservation nonprofit, NABU, has drawn up a petition encouraging the Egyptian government to act against uncontrolled bird slaughter. An English-language version is available to sign here

This article was written by Adam Welz for the Guardian UK.