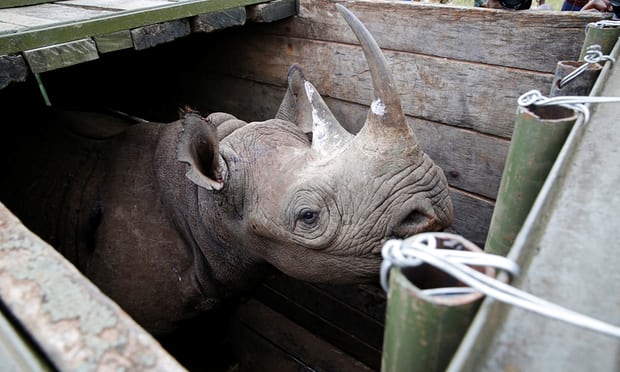 Eight out of 14 critically endangered black rhinos have died after being moved to a reserve in southern Kenya, wildlife officials have revealed, in what one conservationist described as “a complete disaster”.

Preliminary investigations pointed to salt poisoning as the rhinos tried to adapt to saltier water in their new home, the Kenyan Ministry of Tourism and Wildlife said in a statement. It suspended the moving of other rhinos and said the surviving ones were being closely monitored.

Save the Rhino estimates there are fewer than 5,500 black rhinos in the world, all of them in Africa, while Kenya’s black rhino population stands at 750, according to the World Wide Fund for Nature.

Losing the rhinos was “a complete disaster”, the prominent Kenyan conservationist Paula Kahumbu, of WildlifeDirect, told the Associated Press.

Cathy Dean, chief executive of Save the Rhino, said she and international colleagues were shocked and deeply saddened.

She called for external experts to be called in to carry out a thorough investigation into what went wrong, with the findings published in full.

Dean said the scale of the deaths from the translocation was greater than rhino fatalities caused by poaching so far this year in Kenya.

“It’s an absolute tragedy to lose seven [now eight] animals in this way,” Dean said. “The most important thing is for Kenya to do a proper inquiry and investigation into what went wrong. For that to happen the Kenya Wildlife Service needs to bring in external vets and translocation specialists from other countries – Namibia, for example.”

The relocation of endangered animals – known as translocation – involves putting them to sleep for the journey and then reviving them in a process that carries risks. But the loss of half of them is highly unusual.

The black rhinos were moved from the Nairobi and Lake Nakuru national parks to a new sanctuary created in Tsavo East national park in an operation announced by Najib Balala, the Kenyan tourism minister and carried out in collaboration with WWF Kenya.

In a statement the ministry said its preliminary investigations suggested the rhinos had died of salt poisoning as they tried to adapt to saltier water in their new home. It suspended the ongoing move of other rhinos and said the surviving ones were being closely monitored.

“The eight dead rhinos were among those that had been moved to the sanctuary in an initiative to start a new population in line with the National Rhino Conservation and Management Strategy,” the ministry said. “This kind of mortality rate is unprecedented in Kenya Wildlife Service operations.”

“A total of 14 rhinos had been planned to be translocated.

It was the first time since the 1990s that black rhinos had been moved to Tsavo East, which originally had a population of nearly 2,000, according to Save the Rhino, but now has between 10 and 20.

Kahumbu said officials must take responsibility and explain what went wrong. “Rhinos have died. We have to say it openly when it happens, not a week later or a month later,” she said. “Something must have gone wrong, and we want to know what it is.”

Kenya wants to increase its black rhino population to 2,000 by creating populations in areas that provide the right habitat for the animals to thrive.

Dean said translocation was not as common in Kenya as in other southern African countries, such as Namibia.

“In Kenya, they do it every three to four years, whereas other countries are doing them every year,” she said.

“There needs to be a postmortem and we need to look at the whole protocol for translocation.”

The ministry said it had invited an external expert from South Africa to join its investigation and if negligence was found to be a contributory factor disciplinary action would be taken.

“We will make the investigation results public as soon as we receive them,” the statement said.

According to KWS figures, nine rhinos were killed in Kenya last year. In May, three more were shot dead inside a specially protected sanctuary in northern Kenya and had their horns removed. In March, the last male northern white rhino on the planet, an older bull named Sudan, was put down by Kenyan vets after becoming ill.

This article was first published by The Guardian on 13 Jul 2018.