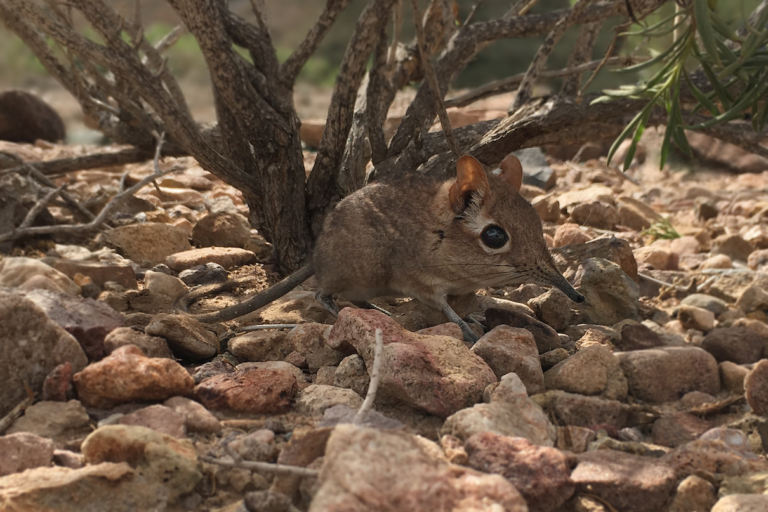 The Somali sengi is a strange amalgamation of creatures. While its body is the shape and size of a mouse’s, it has spindly, gazelle-like legs that allow it to dart across boulders at breakneck speed. It also has a long, trunk-like nose that resembles an elephant’s, although it functions more like an anteater’s with its ability to suck up ants. Some of the Somali sengi’s closest living relatives are the aardvark, elephant and manatee.

But the Somali sengi (Elephantulus revoilii), known commonly as an elephant shrew, has been lost to science since 1968, prompting Global Wildlife Conservation (GWC), an NGO that works to protect endangered species and ecosystems, to list it as one of its 25 most wanted lost species.

It was previously believed that the species only existed in the northern parts of Somalia and Somaliland, although there was a distinct lack of data on the species, prompting the IUCN, the global authority on the conservation status of wildlife and plants, to list the Somali sengi’s conservation status as data deficient.

“There has been a lack of small mammal research in the Horn of Africa over the last several decades, some of that has to do with difficult logistics in Somaliland,” Steven Heritage, a research scientist at the Duke University Lemur Center and lead author of a new paper on Somali sengis, told Mongabay.

“Nobody has ever written anything about living Somali sengis, [so we were] without any information about their diet or their habitats or anything like that. It’s all inferred from closely related species.”

For years, Heritage and his colleague, the late Galen Rathbun, a vertebrate behavioral ecologist from the California Academy of Sciences, had been getting tips that there might be Somali sengis in the Republic of Djibouti, a small country north of Somaliland.

Then, in 2017, the two scientists connected with local Djibouti ecologist Houssein Rayaleh, who had regularly sighted sengis in his area, but wasn’t certain what species he was seeing.

The sengis were also well known to the nomadic people of Djibouti, who referred to the animals by the local name, wali sandheer.

“I knew that sengis were present in Djibouti and on many occasions observed them at sites in different regions of my country,” Rayaleh said in a statement. “However, I did not yet know the true taxonomy of the sengis in Djibouti or that one of the possible species that is here might be considered ‘lost’ to the international scientific community. No one knew the full details of sengis in Djibouti.”

In 2019, Heritage and Rathbun traveled to Djibouti to meet Rayaleh and a local scientist, Djama Awaleh, and the four of them went out into the field to look for the elusive sengis. After determining which areas they habituated, they set up 1,259 traps at 12 locations, baiting them with the savory scent of peanut butter, oatmeal and yeast. It didn’t take long for them to catch their first Somali sengi, which they were able to distinguish from the Rufous sengi (Elephantulus rufescens) by a tuft of fur on its tail.

“It was amazing,” Heritage said in a statement. “When we opened the first trap and saw the little tuft of hair on the tip of its tail, we just looked at one another and couldn’t believe it. A number of small mammal surveys since the 1970s did not find the Somali sengi in Djibouti — it was serendipitous that it happened so quickly for us.”

The team spotted 12 Somali sengis on their two-week expedition, and also captured the first known photos and videos of living Somali sengis. There doesn’t seem to be any big threats to the Somali sengi’s habitat in Djibouti, likely because the terrain was so inhospitable to humans. And since the Somali sengis seemed to be just as abundant as other sengi species, the researchers determined that they probably had an extended range throughout Djibouti and possibly into Ethiopia. Based on these findings, the team has recommended that the IUCN change the species’ status from data deficient to least concern.

“Usually when we rediscover lost species, we find just one or two individuals and have to act quickly to try to prevent their imminent extinction,” said Robin Moore, a lead for GWC’s Search for Lost Species program. “This is a welcome and wonderful rediscovery during a time of turmoil for our planet, and one that fills us with renewed hope for the remaining small mammal species on our most wanted list, such as the DeWinton’s golden mole, a relative of the sengi, and the Ilin Island cloudrunner.”

The team also did some DNA analysis on the Somali sengis, which led to another pivotal discovery: the species was more closely related to sengis that lived in Morocco and South Africa, than with local sengis. Consequently, they realized that the Somali sengi should not be part of the Elephantulus genus, but as part of a newly named genus called Galegeeska.

“Here we have three closely related species that are at the extreme corners of the African continent, and they share a common ancestor,” Heritage told Mongabay. “So that means there must have been an ancestral biogeographic dispersal that was pretty remarkable.”

Next year, Heritage and Rayaleh plan to go on another expedition to learn more about the little-studied Somali sengi, including its use of space and how mating pairs use their space together.

“Not much is known about this species explicitly,” Heritage said. “I don’t know if we’re going to get any surprises, but I’m always happy to be surprised.”