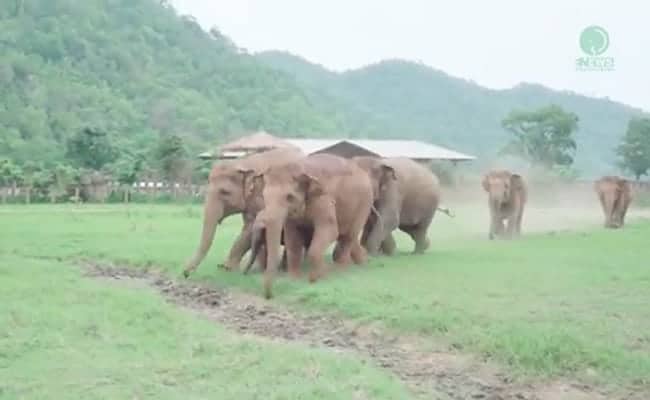 Rescuers are marveling over the heartwarming welcome a young orphaned elephant received after arriving at a sanctuary in Northern Thailand.

According to the Elephant Nature Park, little Dok Geow became an orphan when he was just four-months-old and still dependent on his mother. Dok Geaw’s mother suffered from serious complications after giving birth that were left untreated. She was a logging elephant, and she was forced to continue working while in recovery.

Sadly, by the time she was brought to the Thai Elephant Conservation Center’s Elephant Hospital in Lampang, it was too late to save her. She tragically passed away.

Dok Geow continued to be cared for by the center for over a year, but he was growing up and his caretakers had agreed that it was time for him to join a herd.

Late last week he arrived at the Elephant Nature Park, where he’s been busy getting settled in. He’s also received an incredibly warm welcome from his new family, who couldn’t seem to move fast enough to greet him after hearing his calls.

Thanks to the efforts of those involved in his rescue, Dok Geaw will never know the life of a logging elephant that his mother did. While losing her was an unimaginable tragedy for him, he will now at least spend the remainder of his days at the Elephant Nature Park getting all the love, care and socialization with others of his kind that he needs to thrive.

Hopefully his story will continue to spread and serve as a reminder about how incredibly social, intelligent and aware elephants are and how much still needs to be done to protect them from further exploitation.

Sanctuaries like the Elephant Nature Park, and others around the world, continue to serve a critical role in the rescue and rehabilitation of elephants who have been used and abused, in addition to helping educate people about the true nature of these remarkable animals and why it’s so important to protect them in the wild.

For more on how to help support efforts to rescue and protect elephants in Thailand, check out the Elephant Nature Park.