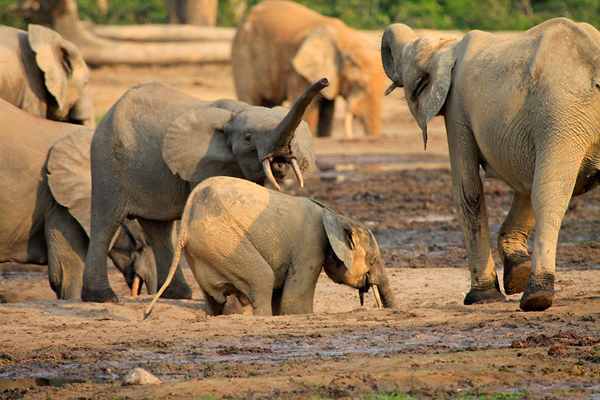 Dozens of elephants have been slaughtered in the Dzanga Bai World Heritage Site in the Central African Republic just days after conservationists warned about an impending threat from the movement of 17 heavily armed poachers. The massacre occurred at a site renowned as “village of elephants”, where tourists and scientists have for decades observed wild elephants congregating at a large clearing to feed on minerals.

According to WWF, at least 26 carcasses have been found in and around the Bai, as the clearing is known. Witnesses say it is now an “elephant mortuary”.

The slaughtered was predicted earlier in the week by conservation groups, which were largely powerless to do anything about it after their staff had to flee the area in April due to security risks. The poachers presented themselves as part of the country’s transitional government forces, which took power after the president was overthrown in March.

Conservationists now fear that more elephants could be killed if the area is not secured.

The Wildlife Conservation Society (WCS), which also works in the area, says that hundreds of elephants may have already been killed.

The elephants were killed for their ivory, which is experiencing a surge in demand due to rising consumption in China, Thailand, and Vietnam. The carnage has reached eye-popping numbers, with more than 30,000 elephants being killed in Africa a year for the trade.

WWF used the incident to call for immediate action on the demand side of the ivory trade.

“The unfolding tragedy in Dzanga Bai must also spur the governments of China and Thailand to act on their commitments to shut down the ivory markets in their countries that are fueling this illicit trade,” said Jim Leape.

WCS President and CEO Cristián Samper added that the Central African Republic’s acting head of state, Michel Djotodia, needed to step up and show leadership on the poaching issue.

“The elephants here face a sure death as criminals obtain ivory, which fuels even more violence in CAR,” Samper said. “On my recent visit to Dzanga Bai, I stood in awestruck silence as I watched hundreds of elephants gathering in this incredible area.”

“CAR’s acting head of state, Michel Djotodia, can help play a leadership role to protect this precious wildlife for the global community in this World Heritage Site.”

The population of forest elephants in Central Africa have declined by 62 per cent over the past decade mostly due to poaching for their ivory.