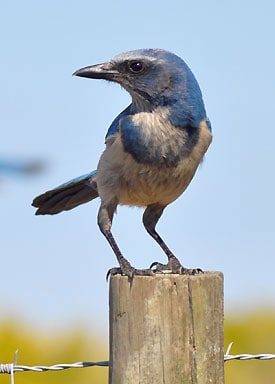 The only bird species unique to the state of Florida is the endangered Florida Scrub-Jay—and this week, new research took a step forward in devising ways to protect the 5,000 or so birds that remain. The work was published in the scientific journal Biology Letters on Wednesday and appeared in online news today and in a press release by the Cornell Lab.

The main threat to this brash, attractive, blue-and-gray bird is its unwillingness to stray from its unique scrub habitat in central Florida. Most of the jays live their entire lives on a single patch of scrub, rarely venturing out over unfamiliar habitat even if more suitable habitat is just a few miles away. This has become a major problem as development has spread across Florida. As subdivisions and citrus groves spring up, the jays face shrinking patches of their scrub habitat and ever-growing gaps of unfamiliar—to them, more or less uncrossable—land.

The new research evaluated this reluctance to travel for the first time in genetic terms. The authors found a clear relationship between the distance of unfavorable habitat that separated jay populations, and the genetic differences between those populations. The bigger the gap, the less often members of the two groups interbred. The evidence suggested groups separated by more than two or three miles did not regularly interbreed.

Armed with this knowledge, researchers can now use it to suggest ways to keep the remaining jays from becoming reproductively isolated and from suffering the problems of inbreeding. By ensuring that clusters of suitable habitat exist within two to three miles of each other, they can improve the chances that jays from different groups mingle with each other and that individual populations do not dwindle away. For more about the work, see our press release. For more about the birds themselves, Living Bird magazine has this article about the unique lifestyle of the Florida Scrub-Jay.

This article was written by the Cornell Lab of Ornithology.