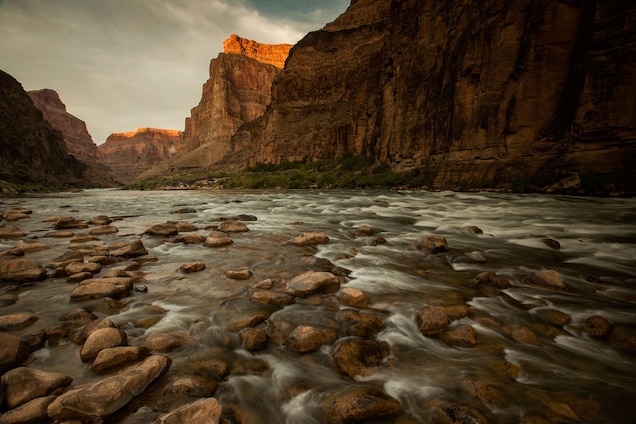 By almost any calculation, the Colorado River at the bottom of the Grand Canyon is one of the most isolated places in the contiguous United States. Although about half a million people a year hike Grand Canyon trails, only a tiny fraction of them make the arduous trek to the bottom, almost a mile from the surface.

One might think that this inaccessibility protects the river’s unique ecosystems. But that’s wrong, says David Walters, lead author of new research conducted by the U.S. Geological Survey. “Pristine doesn’t really exist in the world anymore,” explains Walters, “even at the most remote reaches of the Grand Canyon.”

The first comprehensive study of its kind has found that high levels of mercury and selenium are pervasive throughout the fish and other animals living in the wild and winding 240 mile-long stretch of the Colorado River that runs through the Grand Canyon.

Everything from green algae to black flies, snails, and all six species of fish studied are contaminated with concentrations of heavy metals that have been shown in previous studies to harm the wildlife that eat them, according to the researchers.

The findings are alarming, the researchers say, because mercury is a potent neurotoxin that can alter brain development, reducing the ability of fish to avoid predators. The study also found levels of selenium high enough to cause birth defects in fish, including deformed heads, eyes, mouths, and fins, as well as severely curved spines. Another cause for concern is that heavy metals concentrate — and become more toxic — as they move up food chains.

The study has implications for other creatures in the park, and for life well beyond the banks of the Colorado.

“Desert rivers have been called ‘ribbons of life’ in arid lands,” Walters says. They provide a fast-moving feast of bugs and fish that draw lizards, bats, and birds from the surrounding area.

Mercury was discovered in every sample of two fish species—the speckled dace and fathead minnow. The researchers wrote that the levels found were 30 to 40 times higher than what is considered safe for the wildlife that eat them, such as the belted kingfisher, a Grand Canyon bird known for its energetic flight, large head, and piercing staccato call. In addition, the average selenium concentrations found in the six fish species were two to four times higher than the amount known to be toxic to fish-eating wildlife.

The humpback chub, an iconic Grand Canyon native, wasn’t included in the study because its numbers are too low for scientists to sample. Found only in the Colorado River basin, the fish, which inhabits remote and rugged whitewater reaches of deep canyons, has been deemed endangered since the first federal list was compiled in 1967. The researchers say the high levels of mercury found in its prey likely pose a newly discovered threat to the chub, which has inhabited these waters for at least two million years.

The lone bright spot in the study is that rainbow trout, the most popular sport fish in the Grand Canyon, did not exceed health guidelines for human consumption. Mercury levels were higher in small juvenile trout than in full-grown fish, the ones sought by anglers. That finding puzzled researchers, since it’s the opposite of what is typically found: Mercury usually increases with fish size.

The new study “confirms what we already know about the impact of heavy metals,” says Roger Clark, who has spent decades studying contamination issues in the region for the Grand Canyon Trust, an environmental group. “In the big scheme, this is one more important indicator that what we do outside of the Grand Canyon can and does adversely affect what’s living in the Canyon.”

Contamination from Near and Far

Where are these heavy metals coming from?

The source of selenium is easy to identify: Farming operations hundreds of miles upstream release tons of selenium-rich soil into the Colorado River every year. “When you irrigate dry land,” Walters says, “you mobilize the selenium. A lot of it ends up here.”

Tracing the source of the mercury is trickier, because, as Walters puts it, “Mercury is everywhere now.” Dozens of abandoned gold mines in the canyon continue to leach mercury.

The largest potential source of mercury worldwide is from coal-burning power plants. The massive Navajo Generating Station is 50 miles to the northeast and just five miles from the Colorado River. But Walters cautions against singling out a specific power plant at this point.

“The thing about mercury is that there is a global pool of it in the atmosphere,” he says.

Mercury from coal-burning power plants in China (which accounts for one-third of the atmospheric mercury from human activity) drifts across the Pacific and ends up in rivers throughout the West.

No part of the planet is free from this contamination. Mercury emissions from human sources such as gold mining and electricity generation reach the deep oceans, deserts, alpine lakes, and the Arctic.

But things could be looking up for wildlife in the Grand Canyon and elsewhere, as governments have developed strategies to reduce mercury emissions.

Power plants in the United States must cut mercury emissions by 70 percent under an Environmental Protection Agency rule. In June, the US Supreme Court ordered the EPA to rewrite the regulation to better outline the costs, but many plants already have complied.

Mercury emissions in China increased 164 percent from 1992 to 2007 but the nation recently adopted its own plan to cut power plant emissions. And the United Nations in 2013 adopted the Minamata Convention, a global treaty that requires ratifying nations to develop plans to reduce mercury from gold mines, power plants, and other sources.

This article was first published by National Geographic on 31 Aug 2015. Lead Image: Riffles like these in the Colorado River are rich habitats that may serve as hotspots for mercury and selenium, which accumulate in food webs. The Grand Canyon’s fish and other aquatic creatures are contaminated with toxic levels of the two metals. PHOTOGRAPH BY FRESHWATERS ILLUSTRATED/USGS.