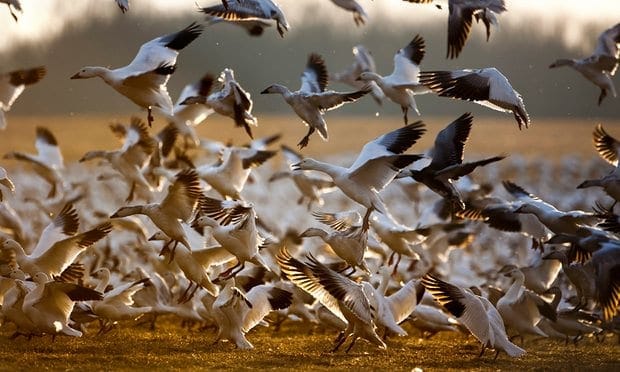 At least three birds were found on the ground this week and were brought to Gibsons Wildlife Rehabilitation Centre, according to the Coast Reporter. Irene Davy from the centre said she knows of at least three or four more that may also be brought in for care.

Tests showed that there was nothing wrong internally with the birds. “These are all young birds and we figure what’s happening is it’s probably their first flight, first migration flight, so they’re just exhausted,” Davy told the Guardian. They aren’t falling out of the sky, but just don’t have the energy to get back up.

“In the scheme of things … the number that we’re finding [on the ground] is not hundreds and hundreds of birds,” she said.

Davy told the Coast Reporter that it can be hard for the birds to find food. According to Audubon, snow geese mainly consume plant material, like seeds, leaves and roots.

If a snow goose is found alone, it’s usually a sign that something is wrong, Davy said. Another sign is if the bird doesn’t try to fly away when approached by a human.

After eating and getting a few weeks of rest and relaxation, the birds will be transported to the George C Reifel Migratory Bird Sanctuary in Delta, where tens of thousands of other snow geese stay in the winter.

To release the snow geese back into the wild, Davy said she will bring the bird to the sanctuary where it will be released into a field with thousands of others. Within a few minutes, the bird will mingle with the other geese. Davy’s only worry was that they may not find their parents again.

Snow geese migrate about a few thousand miles to reach the sanctuary, the Coast Reporter wrote. They travel south for the winter in a U-formation or as a “snowstorm” of birds, honking loudly as they go, according to National Geographic.

This article was first published by The Guardian on 28 Oct 2016.