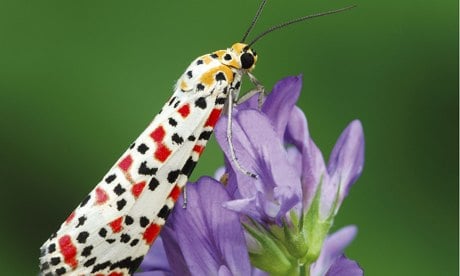 An army of exotic migrant moths has invaded Britain under the cover of darkness, encouraged north by the gentle southerly breezes and balmy evenings of an Indian summer.

The unprecedented autumn influx of rare insects includes the rosy underwing, the crimson speckled and the sinister death’s head hawkmoth, with another rare migrant moth, the Clifden nonpareil, establishing itself as the country’s newest resident breeding species.

The largest and most majestic of the underwing moths, the Clifden nonpareil displays a vivid flash of blue on its underwing to ward off predators. Extinct as a breeding species in Britain since the 1960s, lepidopterists believe that individuals from continental Europe have once again established breeding colonies because it has been found in Dorset, Hampshire and Sussex.

“Clifden Nonpareil is one of the most charismatic of British moth fauna and is on every moth recorders’ ‘wish list’,” said Les Hill, moth recorder for Dorset who has seen three Clifden nonpareil moths in the past two weeks in south Dorset. “As the name nonpareil states, it is peerless and has no equal. To record one in a lifetime is the fulfilment of an ambition; to record them every year in my garden is just remarkable.”

While many immigrant insects get a bad press, including moths such as the horse-chestnut leaf miner which cause aesthetic damage to chestnut trees, moth experts say the current influx is entirely benign, and the newcomers pose no threat to any native species.

“This annual autumnal migration is just a spectacle of nature that’s very exciting for naturalists,” said Richard Fox of Butterfly Conservation. “2013 will prove to be phenomenal for certain species.”

This year is likely to be the best ever for the delicate vestal moth, which has been caught in moth traps as far north as Scotland in numbers not seen since the 1940s. There have only ever been 10 records of the rosy underwing before 2013, when at least three have been recorded, including two at one location, which could again suggest a new colony establishing itself.

Like butterfly-lovers, moth fanatics were in despair after last year’s awful weather and this year’s cold spring suggested it would be another dire year for insects. But an excellent summer has seen good numbers of moths and butterflies emerge across Europe. Calm autumn weather and gentle southerlies have then pushed booming populations north into Britain. As naturalists predicted earlier this summer, a record number of long-tailed blue butterflies have emerged this autumn, the offspring of summer migrants which cannot normally thrive this far north. Clouded yellow butterflies are also still arriving in the current mild conditions.

According to Fox, climate change may be contributing to an increasing number of migratory insects crossing the Channel. “We seem to be getting more migrant moths and butterflies arriving in Britain over time. Britain is at the climatic limit for many species and that limit might be changing with climate change. There’s also a big element of luck with colonisations – you need to have a female arriving which has mated or a migrant female to meet a migrant male which is even more unlikely.”

While big, striking moths such as the death’s head hawkmoth will garner most attention, these ocean-crossing insects include two tiny micro-moths that are so rare they do not have English common names and are not pictured in the British fieldguides. Uresiphita gilvata and Euchromius ocellea are subtropical micro-moths that have joined the influx of insects taking advantage of tail winds to jet in from the Mediterranean and north Africa.

This article was written by Patrick Barkham for the Guardian.