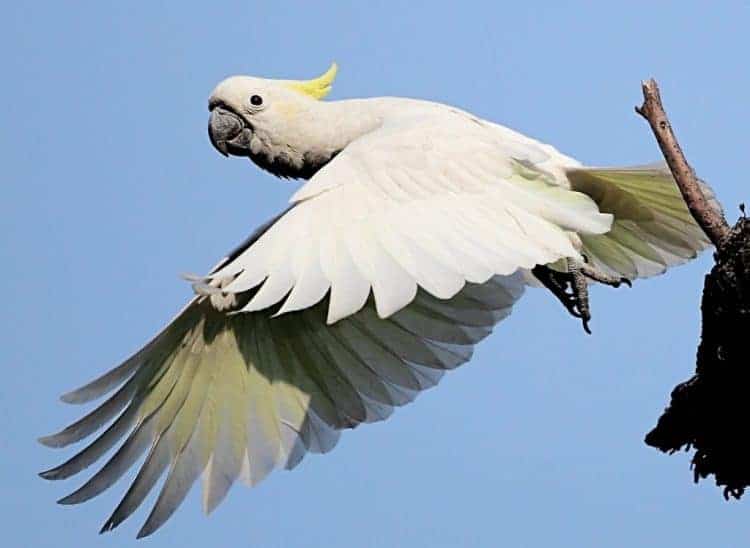 Many internationally traded species are on the verge of extinction in their native countries.

In some cases, traded animals have managed to escape — or have been deliberately introduced — into new locations, forming feral populations.

These secondary, often thriving, populations could hold hope for the survival of endangered species in their native ranges, suggests a new study published in the journal Frontiers in Ecology and the Environment.

For example, the demand for cage birds has caused severe population declines ofthe Critically Endangered yellow-crested cockatoo (Cacatua sulphurea) in its native range in eastern Indonesia and East Timor. But the bird thrives in Hong Kong, thanks to some pet cockatoos that escaped and established a population there.

“Personally, the biggest surprise to me was that the raucous, sparkling-white birds I regularly see flying outside my office window in Hong Kong are critically endangered,” lead author Luke Gibson of the University of Hong Kong told Mongabay.“How could such a conspicuous species thriving amidst the skyscrapers in downtown Hong Kong be threatened?”

Gibson and his colleague Ding Li Yong decided to investigate this further, and discovered that the yellow-crested cockatoo is not an isolated example. They identified 49 globally threatened species that have established wild populations outside their native distributions on all continents except Antarctica.

Sometimes, the exotic populations have fared better than their native counterparts. For instance, a population of the Endangered banteng (Bos javanicus) that was introduced to Australia is now larger than the native banteng populations in Southeast Asia.

Exotic, self-sustaining wildlife populations can often pose trouble for the native wildlife in their introduced ranges. They could compete with native species and threaten their survival, contract diseases, or hybridize with closely related species.

But they also offer a unique opportunity to save species thatare teetering on the brink of extinction, Gibson said.

However, these opportunities come with several challenges.

“It is imperative that the harvest of introduced populations — as a substitute for the pet trade — does not elevate poaching rates on native populations which are clinging to survival,” Gibson said.“In some circumstances, the harvest of introduced populations may be seen as acceptance of the general capture of the species in question — whether in the introduced or native range.We certainly do not want to justify the capture of these threatened species in their native ranges.”

Similarly, before any reintroduction effort, conservationists must ensure that the introduced population is free from diseases, and has not contaminated its genes by breeding with closely related local species, Gibson said.

“As the international trade of wildlife grows and continues to spread species around the globe, I think this situation will become more common in the years ahead.We need to carefully think about what to do with these introduced populations of threatened species,” Gibson added.

This article by Shreya Dasgupta was first published by Mongabay.com on 04 Jan 2017.

Direct effects on exploited populations from where they originate, and the introduction of often aggressive alien species, as a result of escapees or deliberate releases. Two very important reasons why the wildlife pet traders should be banned.