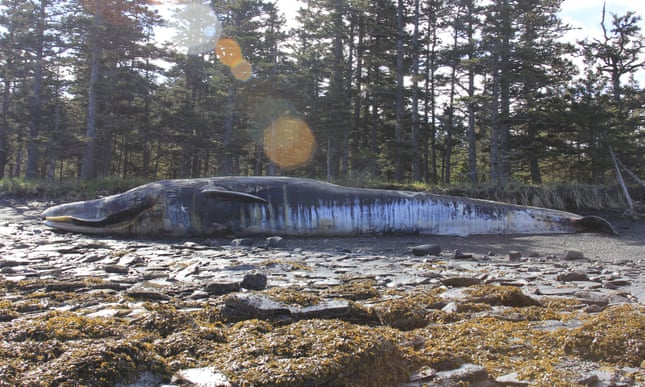 Thirty large whales have recently washed ashore on Alaskan coasts, prompting a federal agency to declare an “unusual mortality event” and mount an official investigation into the mystery of what could be killing so many marine mammals.

Scientists from the National Oceanic and Atmospheric Administration (Noaa) are “very concerned” about how many whales are stranding near and on Alaskan beaches, the agency’s Dr Teri Rowles said in a statement.

“While we do not yet know the cause of these strandings, our investigations will give us important information on the health of whales and the ecosystems where they live,” she said, asking for help from the public to report dead or distressed animals.

Since the beginning of May, 11 fin whales, 14 humpbacks, one gray whale and four unidentified cetaceans have stranded on islands of the western gulf of Alaska and along the peninsula’s southern shore. Most died in the Kodiak archipelago.

“Our leading theory at this point is that the harmful algal bloom has contributed to the deaths,” Noaa spokesperson Julie Speegle told the Guardian. “But we have no conclusive evidence. The bottom line is we don’t know what’s causing these deaths.”

The 30 deaths amount to almost three times the historical average, according to Noaa. There may be more unreported animals – most of the carcasses have been spotted floating and beyond retrieval and others have been scavenged by bears or decomposed past the point of recognition. Scientists have only been able to test one whale sample so far, according to Noaa.

Six large whales have also stranded in the waters of British Columbia, Canada – a fin whale struck by a ship, a sperm whale and four humpbacks. Canadian authorities have managed to take samples from two.

In May, marine mammal specialist Kate Wynne told the University of Alaska Fairbanks that nine of the fin whale deaths were particularly puzzling, since the carcasses were found floating in a relatively small area around Kodiak island.

Why just fin whales? Why not their prey? Why are there not other consumers showing up in mass die-off mode? Kate Wynne

“They appear to have all died around the same time,” Wynne said. “And the strange thing is they are all one species, with the exception of one dead humpback whale found in a different location.

“Why just fin whales? Why not their prey? Why are there not other consumers in the system showing up in mass die-off mode?”

Both endangered species, fin whales and humpbacks are baleen whales that strain seawater through filter-like plates in order to capture tons of zooplankton, krill and small fish. Fin whales grow to 75ft and live up to 80 years, mostly in pods of two to seven, and migrate around the world’s oceans. Humpbacks also migrate, grow up to 50ft, and are famous for their soaring breaches and complex songs.

Wynne suggested that the nine fin whales may have consumed something toxic.

Agency researchers will partner with scientists from other organizations and Canada to investigate the deaths, Speegle said.

The investigation could take months or years, and could prove inconclusive: no cause has been determined in 32 of 61 documented unusual die-offs since 1991. Of the 29 for which causes were found, culprits included infections, biotoxins, human interactions and malnutrition – all signs of complex changes in the ecosystem.

Biotoxins will be of particular interest to investigators because mass deaths linked to the poisons of harmful algal blooms have increased since 1996, and because this August Noaa recorded a toxic algal bloom of unprecedented size, stretching from the gulf of Alaska to the coast of Mexico.

Dr Rowles told Kodiak public radio that tests for biotoxins including domoic acid, which is produced by warm-water algae, have been inconclusive. She said the team needed more samples to start ruling out biotoxins and other culprits, but that retrieving them was proving difficult.

“Trying to investigate large whale mortality events provides a lot of logistical complications, [including] getting access to good samples, getting access safely to carcasses, and even finding a place for carcasses to be towed and examined,” she said.

“So far there is no ‘smoking gun’ in this environmental mystery,” she said.

Researchers have also reported that at least one species of seabird, the common murre, suffered a die-off in early June, “in unusual numbers” and with “many appearing weak” along Alaskan shorelines.

The scientists cautioned that they did not know whether the bird deaths were related to the deaths of the whales.

This article was first published by The Guardian on 22 Aug 2015.