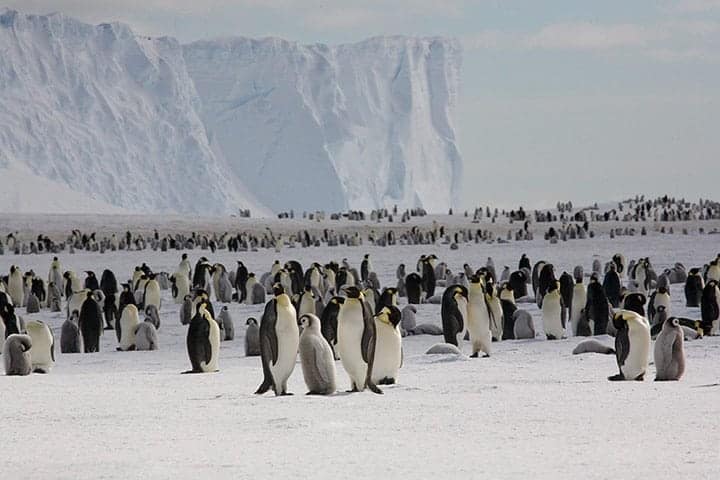 Nearly twice as many emperor penguins inhabit Antarctica as was thought. UK, US and Australian scientists used satellite technology to trace and count the iconic birds, finding them to number almost 600,000. Their census technique relies in the first instance on locating individual colonies, which is done by looking for big brown patches of guano (penguin poo) on the white ice. High resolution imagery is then used to work out the number of birds present.

It is expected that the satellite mapping approach will provide the means to monitor the long-term health of the emperor population. Climate modelling has suggested their numbers could fall in the decades ahead if warming around Antarctica erodes the sea ice on which the animals nest and launch their forays for seafood.

“If we want to understand whether emperor penguins are endangered by climate change, we have to know first how many birds there are currently and have a methodology to monitor them year on year,” said Peter Fretwell from the British Antarctic Survey (BAS). “This study gives us that baseline population, which is quite surprising because it’s twice as many as we thought, but it also gives us the ability to follow their progress to see if that population is changing over time,” he told BBC News.

The scientists have reported their work in the journal PLoS One. Their survey identified 44 key penguin colonies on the White Continent, including seven that had not previously been recognised. Although finding a great splurge of penguin poo on the ice is a fairly straightforward – if laborious – process, counting individual birds in a group huddle is not, even in the highest resolution satellite pictures.

This means the team therefore had to calibrate their analysis of the colonies by using ground counts and aerial photography at some select sites. Fretwell and colleagues totted 595,000 penguins, which is almost double the previous estimates of 270,000-350,000 emperors. The count is thought to be the first comprehensive census of a species taken from space. Co-author Michelle LaRue from the University of Minnesota said the monitoring method provided “an enormous step forward in Antarctic ecology”.

“We can conduct research safely and efficiently with little environmental impact,” she explained. “The implications for this study are far-reaching. We now have a cost-effective way to apply our methods to other poorly understood species in the Antarctic.” The extent of sea ice in the Antarctic has been relatively stable in recent years (unlike in the Arctic), although this picture hides some fairly large regional variations.

Nonetheless, computer modelling suggests a warming of the climate around Antarctica could result in the loss of more northern ice floes later this century. If that happens, it might present problems for some emperor colonies if the seasonal ice starts to break up before fledglings have had a chance to acquire their full adult, waterproof plumage.

And given that the krill (tiny crustaceans) that penguins feed on are also dependent on the ice for their own existence (they feed on algae on the ice) – some colonies affected by eroded floes could face a double-whammy of high fledgling mortality and restricted food resources. But this can all now be tested by the methodology outlined in the PLoS paper.

“The emperor penguin has evolved into a very narrow ecological niche; it’s an animal that breeds in the coldest environment in the world,” explained Peter Fretwell. “It currently has an advantage in that environment because there are no predators and no competition for its food. “If Antarctica warms so that predators and competitors can move in, then their ecological niche no longer exists; and that spells bad news for the emperor penguin.”