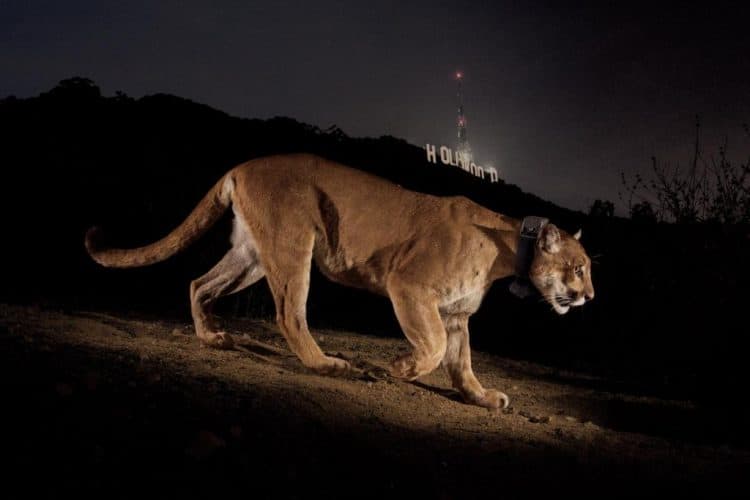 The most famous cougar in Hollywood doesn’t work in television. And he’s male. For the past three years, a male mountain lion has been living in the center of bustling Los Angeles, crossing 10-lane highways, getting his picture taken near the Hollywood sign, and attracting worldwide attention.

On Tuesday morning, the cat was holed up in a crawlspace in a home in Los Feliz, attracting a new round of attention, with news crews staking out the property.

But by about noon local time the cougar was confirmed back in its wilderness home in Griffith Park, says Janice Mackey, a spokesperson for the California Department of Fish and Wildlife.

The cat was no longer visible in the home’s crawlspace by around 9 a.m. but it wasn’t until a few hours later that biologists were able to pinpoint its exact location, using telemetry equipment to track the animal’s radio collar, which was previously purchased with a grant from the National Geographic Society. Officials were concerned that the mountain lion was still hiding in the neighborhood, but the radio collar confirmed it was a mile and a half into the park’s wilderness.

Workers installing a security system at the house had come face to face with the predatory cat on Monday and then reported it to state wildlife officials, who tried to scare it off Tuesday morning by pelting it with tennis balls and bean bags.

“People really need to get out of the way so the cat will move,” Steve Winter, a National Geographic photographer who made the cat famous by photographing it with camera traps for a December 2013 magazine article, said earlier Tuesday morning. The cat is known as P-22 by biologists.

In fact, officials kept media and neighbors away from the crawlspace, which was in the back of the house, says Mackey, in order to encourage the animal to flee.

And that’s just what happened. “The cougar has left the area,” says Mackey, though no one saw it slink off.

P-22 ended up in Griffith Park about three years ago, says Winter, who has spent many days over the past several years photographing the animal. At more than 4,000 acres, the area is the largest municipal park with urban wilderness in the United States.

To get there, the cat “crossed two of the busiest freeways in the U.S. and walked right by Century City, where George Clooney lives,” Winter says.

In Griffith Park, the cat has thrived, thanks to an abundance of game, especially deer. The animal is active primarily at night and has been rarely seen by the public.

The cougar looks healthy, says Jeff Sikich, a biologist with the National Park Service that helped track him Tuesday. “He has been eating well, and he has recovered from mange,” says Sikich.

P-22 had been captured by biologists last year and treated for the disease. He’s thought to be about five years old, Sikich added.

Because the park is surrounded by development and the edges aren’t smooth transitions, the mountain lion occasionally wanders down roads and through yards, according to the movements recorded on his radio collar.

The fact that the cat did not attack the workers when they ended up eye to eye with him suggests that he is not a danger to people, Winter argues.

As far as his adventure in the crawlspace, “he’s going to learn not to do that again,” Winter predicts.

To help make sure of that, area homeowners should seal up any holes around their property, says Sikich. If you do encounter a wild mountain lion, don’t run, he adds. Make yourself look bigger and yell, and back away slowly if you need to.

This article was first published by National Geographic on 14 Apr 2015.