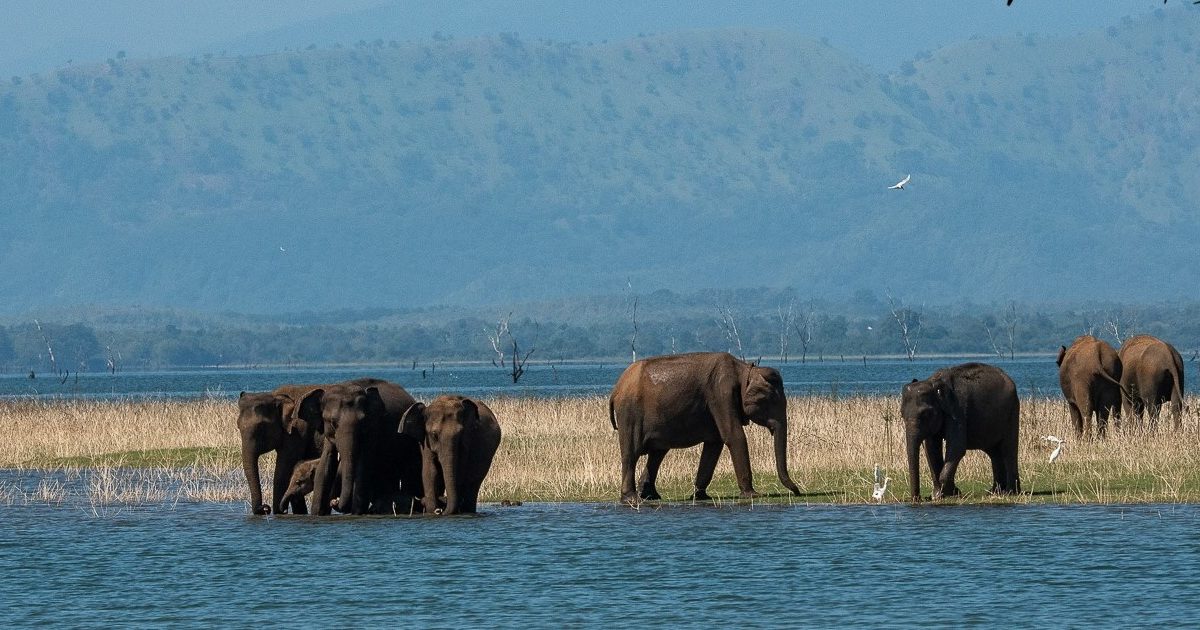 Triggered by a rumor that the protected status of Dahaiyagala would soon be stripped as part of a countrywide drive to increase agricultural productivity in the Indian Ocean island nation, the farmers entered the forest area aiming to clear the forest and cultivate the land.

Shortly after the incursion, officers from the Department of Wildlife Conservation (DWC) managed to get the situation under control, but by that time, several patches within Dahaiyagala had already been deforested. Now, the sanctuary remains under serious threat.

Dahaiyagala is a 2,685-hectare (6,635-acre) section of forest that lies between Udawalawe National Park and Bogahapattiya, a proposed forest reserve rich in wildlife, with abundant water and vegetation that make it a refuge during times of drought. Dahaiyagala was declared a sanctuary in 2002 in a nod to its importance as a corridor for elephants and other wildlife.

Sri Lankan law restricts human activities in wildlife sanctuaries, disallowing deforestation and the expansion of farmland. Several farmers had been tending crops before the latest incursion, but today the threat of further encroachment from nearby communities looms larger. And more than a decade of attempts by conservation organizations has yet to result in the complete protection of the area.

In January 2021, Sri Lanka’s head of state Gotabaya Rajapaksa met with the people of Thanamalwila, which sits near the edge of the park. In the Rajapaksa pledged to release traditional farmlands that had been absorbed into conservation areas to facilitate more agriculture for surrounding communities. He said he had issued instructions to prevent action from being taken against farmers. The attempted land grab ensued on Feb. 7, 2021, forcing wildlife officials to make several arrests to control the mob.

However, there had been a recent surge in local communities trying to push into forest areas to expand agricultural activities.

A lifeline for elephants

The chance to catch a glimpse of wild Asian Elephants (Elephas maximus maximus) year-round makes Udawalawe National Park a popular stop for tourists. Elephant corridors like Dahaiyagala have contributed to this success, enabling elephants to move freely from other areas.

“The Dahaiyagala corridor is a narrow stretch of forest and not large enough to sustain any resident elephants,” says Shermin de Silva, a conservation biologist and behavioral ecologist who founded the elephant-focused NGO Trunks and Leaves.

But they use it as a sort of highway between Bogahapattiya and Udawalawe, de Silva adds. “Elephants using this patch are the same creatures found within the national park.”

The park is “just part of these elephants’ seasonal home range, which means these elephants do not live just inside that park. The majority — more than 60% — roam around all of the available forests nearby, including the Dahaiyagala corridor, which they use to reach Bogahapattiya, a resource-rich area needed for their survival,” de Silva says.

In the past two months, she has observed that Udawalawe elephants were starting to look thin. What’s more, they didn’t seem to put on enough weight to regain good body condition during the wet season, which she says is a sign of inadequate fodder.

Udawalawe elephants also have very low birth rates, and calves suffer when mothers have inadequate milk supply. Previous generations may have survived into their 60s, but de Silva said the elephants are now dying younger.

“Our studies have shown that the elephant population is already in slow decline for these reasons, and [the] blocking of [the] Dahaiyagala [corridor] would make the situation worse,” de Silva told Mongabay.

Elephants aren’t the only animals that need connectivity between protected areas and forested areas. Other species like leopards (Panthera pardus kotiya) and Sri Lankan sambar deer (Rusa unicolor unicolor) need to move around as well, Silva said, highlighting the importance of the sanctuary.

Udawalawe National Park is Sri Lanka’s second-most popular national park, after Yala National Park. The Sri Lanka Tourism Development Authority (SLDA) found that in 2018, Udawalawe took in $3 million, primarily from ticket sales and vehicle and boat rentals. Additionally, many nearby communities are involved in park-related tourism, and it is an important economic resource for them.

The park is also famous for some of its iconic “tuskers,” which offer visitors the chance to see older male elephants. Sumedha is one such tusker, and sightings confirm that he uses the Dahaiyagala corridor. The area is also home to the only known dwarf Asian Elephant, a bull with short legs but an otherwise average-size body.

“If Dahaiyagala corridor is blocked, iconic elephants may decide to remain within deep-forested areas or may even get killed in their attempt to follow seasonal patterns of migration,” Weerathunga said. “Either way, the park will lose its key attraction.”

Others say that turning the sanctuary into farmland in the short run will have long-term consequences.

“Is it worth sacrificing Dahaiyagala forest to help a handful of encroaching farmers? This will impact the Udawalawe elephant population and have a serious bearing on local livelihoods,” says Rohan Wijesinha, a trustee of a Sri Lankan coalition called the Federation of Environmental Organizations.

Wijesinha has been a regular visitor to Udawalawe for more than 30 years, and he said the elephants have driven the region’s tourism.

“At least 10,000 locals directly depend on the national park. Not only safari jeep drivers, there are local hotel owners who directly service tourists,” Wijesinha says. “If the park loses its edge as one of Sri Lanka’s [premier] national park[s], its revenue generation would significantly decrease.”

In addition to the immediate economic impacts, environmentalists fear the closure of the Dahaiyagala corridor could drive elephants into other areas, further escalating human-elephant conflict (HEC).

If people crowd into this corridor and convert it to agriculture, that would likely trigger a surge in HEC in the area, says Sumith Pilapitiya, a former director-general of the DWC. Then, authorities will have little recourse to stop it.

“A government decision to block the corridor will not reduce the biological need for these elephants to move between the two protected areas,” Pilapitiya says.

This article by Malaka Rodrigo was first published on Mongabay.com on 13 April 2021. Lead Image: The picturesque Udawalawe National Park in southern Sri Lanka, the second-most visited wildlife park in the country, in part because tourists can see wild Asian elephants there throughout the year. Image courtesy of Mevan Piyasena.