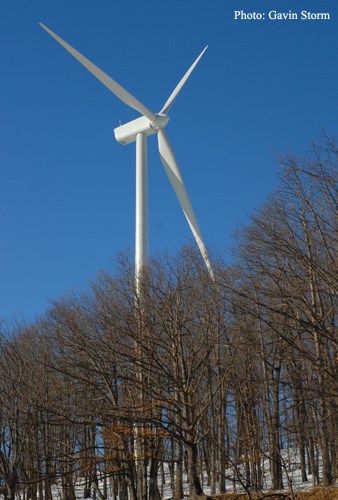 American Bird Conservancy (ABC), the nation’s leading bird conservation organization, today formally petitioned the U.S. Department of the Interior to protect millions of birds from the negative impacts of wind energy by developing regulations that will safeguard wildlife and reward responsible wind energy devThe nearly 100-page petition for rulemaking, prepared by ABC and the Washington, D.C.-based public interest law firm of Meyer, Glitzenstein & Crystal (MGC), urges the U.S. Fish and Wildlife Service (FWS) to issue regulations establishing a mandatory permitting system for the operation of wind energy projects and mitigation of their impacts on migratory birds. The proposal would provide industry with legal certainty that wind developers in compliance with a permit would not be subject to criminal or civil penalties for violation of the Migratory Bird Treaty Act (MBTA).

The government estimates that a minimum of 440,000 birds are currently killed each year by collisions with wind turbines. In the absence of clear, legally enforceable regulations, the massive expansion of wind power in the United States will likely result in the deaths of more than one million birds each year by 2020. Further, wind energy projects are also expected to adversely impact almost 20,000 square miles of terrestrial habitat, and another 4,000 square miles of marine habitat.

The petition highlights the particular threat from unregulated wind power to species of conservation concern and demonstrates the legal authority that FWS possesses to enforce MBTA regulations and grant take permits under the Migratory Bird Treaty Act. The petition also provides specific regulatory language that would accomplish the petition’s objectives, identifying the factors that would be considered in evaluating a permit for approval, including the extent to which a given project will result in adverse impacts to birds of conservation concern and species that are under consideration for listing under the Endangered Species Act.

ABC is filing this petition because it’s clear that the voluntary guidelines the government has drafted will neither protect birds nor give the wind industry the regulatory certainty it has been asking for. We’ve had voluntary guidelines since 2003, and yet preventable bird deaths at wind farms keep occurring. This includes thousands of Golden Eagles that have died at Altamont Pass in California and multiple mass mortality events that have occurred recently in West Virginia,” said Kelly Fuller, Wind Campaign Coordinator for ABC.

“The status quo is legally as well as environmentally unsustainable. The federal government is seeking to promote “a smart from the start” energy sector in a manner that is in violation of one of the premier federal wildlife protection statutes. ABC’s petition seeks to bring wind power into harmony with the law as well as with the needs of the migratory bird species that the law is designed to safeguard,” said Shruti Suresh, an attorney at MGC, the law firm that prepared the petition with ABC and that has brought many legal actions enforcing federal wildlife protection laws.

The petition is available online here.

ABC supports wind power when it is “bird-smart”. A coalition of more than 60 groups has called for mandatory standards and bird-smart principles in the siting and operation of wind farms. The coalition represents a broad cross-section of respected national and local groups. In addition, 20,000 scientists, ornithologists, conservationists, and other concerned citizens have shown their support for mandatory standards for the wind industry.

“ABC’s petition would safeguard more than just birds covered by the Migratory Bird Treaty Act. It proposes a model rule that would allow the government to consider impacts of wind farms on all bird species, as well as bats and other wildlife,” said Fuller.

ABC’s petition states that properly sited and operated wind energy projects may be an important part of the solution to climate change, a phenomenon that poses an unprecedented threat to species and ecosystems. However, poorly sited and operated wind projects pose a serious threat to birds, including birds of prey such as Bald Eagles, Golden Eagles, hawks, and owls; endangered and threatened species, such as California Condors and Whooping Cranes; and species of special conservation concern, such as the Bicknell’s Thrush, Cerulean Warbler, Tricolored Blackbird, Sprague’s Pipit, and Long-billed Curlew.

Under the MBTA, FWS has the capacity to authorize, subject to appropriate conditions, the unintended but foreseeable take of protected birds. However, the MBTA prescribes that FWS can exercise this authority to allow incidental take only through “suitable regulations.” This is particularly significant for the wind industry because it is virtually impossible to operate a wind energy project without killing or injuring at least some migratory birds. Wind energy projects that are already in operation are therefore in ongoing violation of the Act. In addition, FWS itself is aware of planned projects that will also kill migratory birds in violation of federal law.

However, instead of imposing mandatory regulations on wind energy projects to anticipate and avoid such impacts before they occur, FWS has prepared “voluntary guidelines”. The petition asserts that, by allowing the industry to police itself, FWS has permitted widespread disregard for legal mandates the Service is entrusted to enforce. The guidelines attempt to offer legal assurances to the wind industry that it will not be prosecuted under the MBTA based on industry self-certification; assurances that are without any legal basis.

This article was written by American Bird Conservancy (ABC), a 501(c) not-for-profit membership organization whose mission is to conserve native birds and their habitats throughout the Americas. ABC acts by safeguarding the rarest species, conserving and restoring habitats, and reducing threats, while building capacity in the bird conservation movement.elopment.