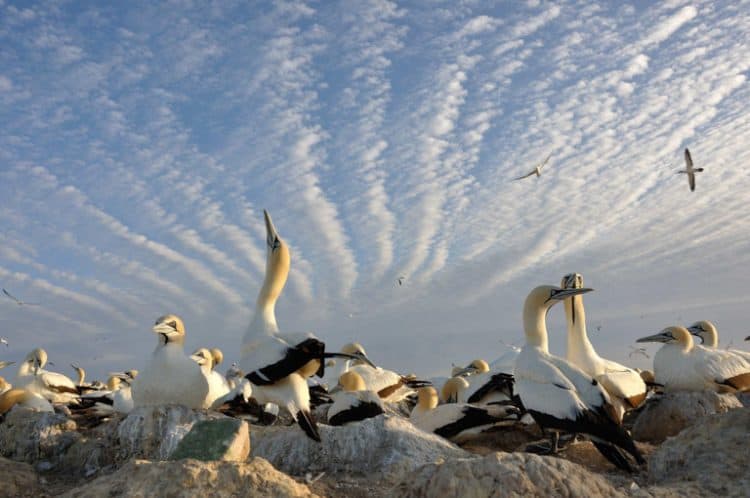 Competition for fish stocks with fisheries to feed humans could be forcing seabirds to go hungry, according to new research.

The study, published Dec. 6 in the journal Current Biology, reveals that seabirds’ share of fish has dropped by nearly 20 percent over a span of 40 years. Expanding large-scale fisheries, meanwhile, have increased their haul by 10 percent in the same period.

What makes those facts doubly concerning is that seabird communities have dwindled, said David Grémillet, the study’s lead author. Research published in 2015 found a 69 percent slide in their numbers since 1950.

In a statement from the University of British Columbia, Grémillet, a biological oceanographer at CNRS, the French National Center for Scientific Research, likened fisheries’ impact on seabirds to “a boa tightening its grip on prey.”

The research overlaid maps of the feeding areas of 276 species of seabirds with the take zones of human fisheries and compared them over two periods, the 1970s and 1980s, and the 1990s and the 2000s. The team tallied up the amount eaten by seabirds around the world, as well as how much fish humans are thought to have pulled from the oceans, during those stretches.

Birds that go after krill, squid and smaller fish such as herring and sardines face the toughest struggle to avoid starvation, Deng Palomares, one of the study’s co-authors and a scientist and project manager with the Sea Around Us project based at the University of British Columbia, said in the statement.

The Sea Around Us has collected decades of data on both seabird distribution and human fisheries, and this study was the first to look at the overlap on a global scale.

Palomares said that possible starvation as their food source was fished out was just one of the challenges that seabirds faced. Pollution, plastic trash and entanglement in fishing gear are also threatening to cut into the global number of seabirds, she said.

“If we don’t do anything, seabird populations are going to collapse,” Palomares said.

Grémillet said penguin numbers were down by 25 percent, and frigate bird and tern populations had dipped by almost 50 percent in the past few decades.

“You have more and more fishing effort for less and less potential seabird prey, consumed by fewer birds,” Grémillet said.

“The noose is tightening around seabirds,” he added. “I find this terrifying.”

As a scientist, Grémillet is concerned about the ecological impact of the loss of species. But he also said we should consider the cultural void that extinction could create.

“[When] we lose seabirds we lose an irreplaceable heritage — creatures which have inspired every single maritime society since the dawn of humanity, by bridging the mysterious gap between us and the sea,” Grémillet said in a statement from CNRS.

This article was first published by Mongabay.com on 12 Dec 2018.