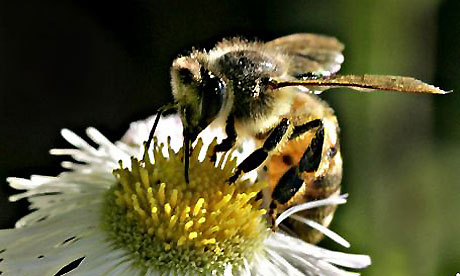 A widely used insect nerve agent has been labelled a “high acute risk” to honeybees by the European Food Safety Authority (EFSA). A similar assessment by the EFSA on three other insecticides preceded the suspension of their use in the European Union.

“The insecticide fipronil poses a high acute risk to honeybees when used as a seed treatment for maize,” the EFSA said in a statement. “EFSA was asked to perform a risk assessment of fipronil [by the European commission], paying particular regard to the acute and chronic effects on colony survival and development and the effects of sub-lethal doses on bee mortality and behaviour.”

Fipronil, manufactured by the German chemical company BASF, is used in more than 70 countries and on more than 100 different crops, as well as for cockroach and termite control. The EFSA report found the risk to honeybees from drifting pesticide dust was high when fipronil was used as a seed treatment for maize, but did not have the data to assess the risk from its use on sunflowers, or the risk via pollen and nectar, or the risk to other bees and pollinators.

Scientific evidence that common pesticides are harming bees has risen in the last year and, along with huge public protests, culminated in the European commission (EC) imposing the ban on three neonicotinoids. Bees and other insects pollinate three-quarters of the world’s food crops but have suffered steep declines due to habitat loss, disease and pesticide use.

“The EC needs to seriously look at the fipronil case, and whether it warrants similar restrictions,” said MEP Glenis Willmott, Labour’s leader in the European parliament. “I think there are grounds for the commission to step in. I hope that when evaluating this and other potential risks to honeybees the UK government will play a more constructive role than before, after defying scientific advice and public opinion in the neonicotinoid case.” The UK was one of eight out of the 27 EU member states that unsuccessfully opposed the EC neonicotinoid ban.

“Our business is very dependent on bees; therefore, it is in our best interest to understand the real causes of the decline in bee health and act upon them”, said Jürgen Oldeweme, senior vice-president for BASF’s crop protection division. “The problem of declining bee health must be addressed via a holistic approach and not by singling out certain technologies that have a solid record of safe use, such as fipronil.”

But green campaigners said the EFSA report showed current EU regulation of pesticides was not sufficient. “The fact that fipronil and other pesticides toxic to bees were authorised at all shows that EU safety testing is in dire need of an overhaul,” said Marco Contiero, Greenpeace EU agriculture policy director. “These pesticides have been building up in our environment for a decade, so limited, temporary bans won’t be enough to give bees a breather. The commission should develop a comprehensive plan for the protection of insect pollinators, starting with a solid ban on fipronil and other bee-harming substances.”

Dr Friedhelm Schmider, director general of the European Crop Protection Association, which represents the chemical industry, said any ban might affect food production: “We plead with regulators to take into account all elements and consider the potential impact on agriculture that any decision might have. We are fully committed to work on proportionate measures managing any possible risk from pesticides.”