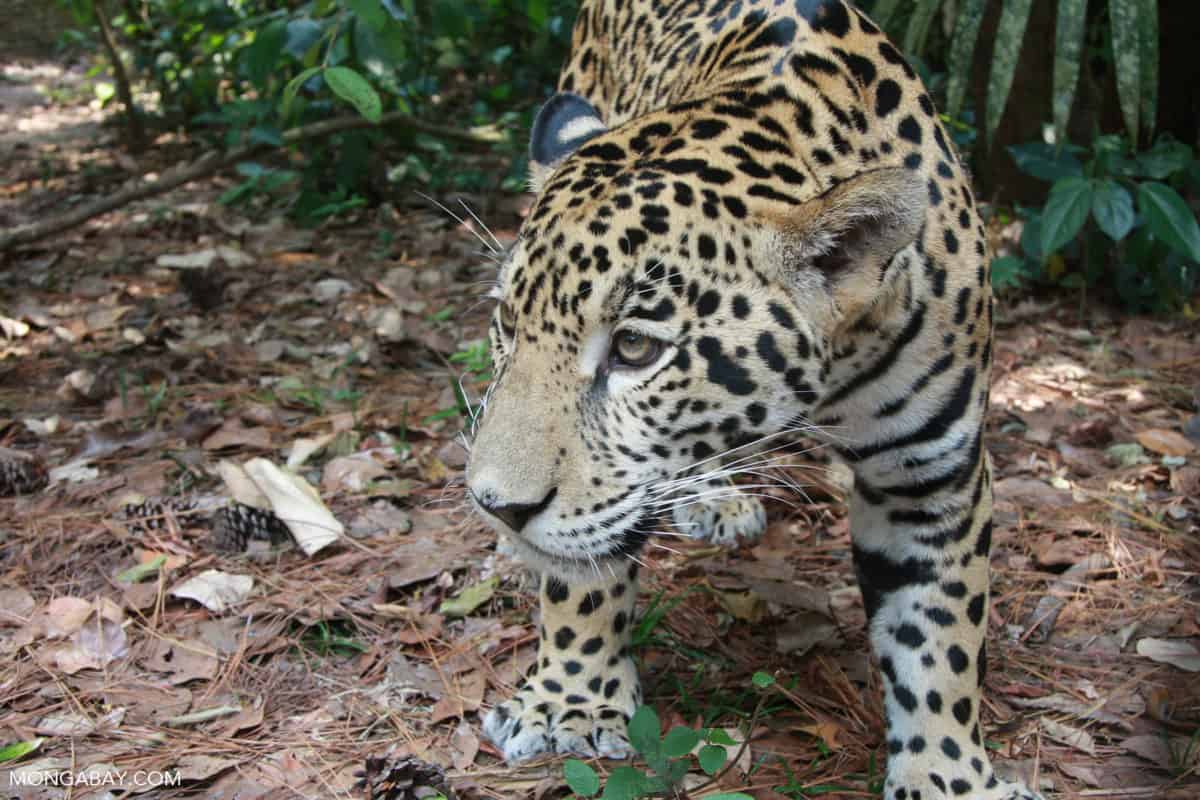 In August 2019, an unprecedented number of fires ripped through the Brazilian Amazon, sparking worldwide interest in reports of burning rainforest. In fact, the majority of blazes were on land that had already been stripped of forest. According to a report from the Monitoring of the Andean Amazon Project (MAAP), at least 1,250 square kilometers (480 square miles) was deforested in early 2019 and then set alight later in the year to prepare the land for agricultural use.

With scientists projecting an increase in this destructive combination of deforestation closely followed by burning over the coming years, conservationists are scrambling to find out how the destruction is affecting the region’s spectacular wildlife.

In a recent study, researchers used the Amazon’s top predator, the jaguar (Panthera onca), as a benchmark species to examine the effects of deforestation-linked habitat loss.

“It is commonplace to see in newspapers and on TV the numbers of hectares deforested or burned in the Amazon, but it really intrigued me what this would mean for jaguars,” Fernando Tortato, conservation scientist for Panthera, the global wild cat conservation organization and study co-author, told Mongabay in an email.

The findings, published in Conservation Science and Practice, estimate that 1,470 jaguars — nearly 2% of Brazil’s jaguar population — died or were displaced in the Brazilian Amazon due to deforestation and fires between August 2016 and December 2019. During this period, the region lost approximately 32,000 km2 (8,880 mi2) of natural forest, an area roughly the size of Belgium, according to data from INPE, mainly in the southern and eastern areas of the Amazon known as the “arc of deforestation.” The states of Pará and Mato Grosso showed the highest rates of jaguar deaths and displacements over the study period.

The researchers say the majority of the cleared areas are irretrievably lost. “When habitat like that of the Brazilian Amazon is lost, it — and the jaguars that called this landscape home — tends to be lost forever,” John Goodrich, chief scientist and tiger program director for Panthera, said in a statement. “Unlikely to recover to its previous wild form, these forests are presumably destined to support agricultural developments, grasslands or livestock production.”

Jaguars are listed as near threated by the IUCN, having lost 40% of their range over recent decades due to habitat loss, land-use change, shifting prey patterns and the effects of climate change.

A 2018 study estimated there were more than 170,000 jaguars living across the species’ entire range, with Brazil supporting almost half of the world’s population, 90% of which live in the Amazon. According to Tortato, jaguars are under increasing pressure in vulnerable parts of their range outside of the Amazon, such as parts of Central America and the Atlantic Forest, where narrow habitat corridors and fragmented populations lead to “increasingly isolated” jaguars and heighten the risk of genetic instability.

Tortato said the surging deforestation and fire in the species’ stronghold in the Brazilian Amazon could now place further pressure on the struggling species. “A subsequent problem to immediate displacement caused by deforestation and fire is habitat fragmentation,” he said. “Isolated populations become more vulnerable to poaching, conflict with cattle ranching and inbreeding.”

In addition to human-wildlife conflict, displaced jaguars could also intrude on occupied territories, leading to aggressive confrontations between the big cats themselves.

Deforestation in the Brazilian Amazon has shown no signs of abating since 2019, with 2021 logging rates hitting a five-year high and a recent MAAP report indicating that more than 8,600 km2 (3,320 mi2) of primary forest was lost across the Amazon this year, nearly 80% of it in Brazil.

Moreover, the Pantanal, the world’s largest tropical wetland, which straddles the borders of Brazil, Paraguay and Bolivia south of the Amazon, has fallen victim to mounting conflagrations in recent years. Although many of the Pantanal fires were believed to be deliberately started to clear land for agricultural purposes, droughts are fueling the flames.

The fires could affect the small but significant population of jaguars, numbering around 2,000, that lives in the wetland.

“The Pantanal has been facing a severe drought for the last three years and consequently the number of fires has increased,” Tortato said, adding that the Pantanal has the ability to regenerate following fire since it is a savanna ecosystem, unlike the humid Amazon rainforest, which has no such resilience.

“These fires [in the Pantanal] are of concern because they are concentrated mainly in areas once humid and important for jaguars and their main prey, the caiman and capybara,” Tortato said. “So far, connectivity and key areas for jaguars have not been compromised, but if the drought persists for the next few years it could represent a reduction in suitable habitat for jaguars in the Pantanal.”

For the jaguars coping with rapidly shifting conditions further north in the Amazon, the future remains unclear. The recent study highlights that at least 300 jaguars are being killed or displaced each year. As Tortato described it, this is “not a norm we can accept.”

But with such a high proportion of the species’ global population living in Brazil, a lot will depend on how the country governs the scale of deforestation and fire.

To keep track of how the jaguars are faring, the study authors recommend “real-time satellite monitoring” using satellite data and population estimates in an approach akin to that employed in their study. According to Tortato, this could enable experts to monitor jaguar displacement due to habitat loss and help them to better target conservation efforts on the ground and to prioritize areas for enforcement action.

Tortato said that ultimately the species’ long-term survival will depend on our ability to keep populations connected through a network of wildlife corridors so that they can interbreed and disperse. “Spatially identifying these threats enables practical actions such as proposing corridors between forests in private areas, indigenous lands and protected areas,” he said.

This article by Carolyn Cowan was first published by Mongabay.com on 12 October 2021. Lead Image: Jaguar (Panthera onca), photographed in Belize. Image by Rhett A. Butler / Mongabay.