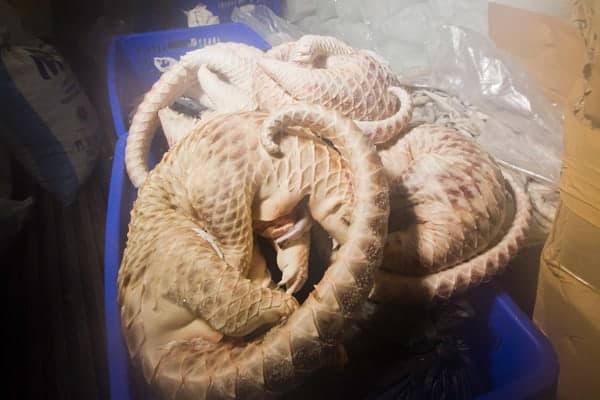 Officials confiscated the illegal wildlife goods in Medan, Sumatra and busted the smuggler, who has only been identified as SHB. This is the largest pangolin bust in Indonesia since 2008.

“This is a major breakthrough, both in terms of the enormous size of the shipment and in terms of the increasing sophistication of collaborative methods used by Indonesian authorities in making the bust,” said Wildlife Conservation Society’s (WCS) Executive Director for Asia Programs, Joe Walston. WCS assisted in the investigation through its Wildlife Crimes Unit (WCU).

Officials say the pangolins were poached on Sumatra and were destined for China. In all the haul was worth an estimated $1.8 million USD.

The smuggler faces a maximum sentence of five years in prison and maximum fine of $10,000 USD.

The pangolin in question is the Sunda pangolin (Manis javanica), which is listed as Critically Endangered on the IUCN Red List. Little-known to the general public, pangolins have the terrible honor of being the world’s most trafficked animal. Their scales are used in traditional Chinese medicine; their meat is considered a curative in East Asia; and even their fetuses are eaten.

Of the four species found in Asia, all are now considered either Endangered or Critically Endangered. As these species are wiped out, trafficking is now increasing on the other four species of pangolin found in Africa.

This article was first published by Mongabay.com on 28 Apr 2015.

I was recently told that Chinese human skulls are an excellent cure for various cancer and liver disease …..

Until the Chinese stop killing for their barbaric ancient medicines our wildlife will continue to decline to extinction. I personally will never support the Chinese if I can help it on products or supporting their tourist industry. I spend several months there on business many years ago and what I saw and witnessed was sickening, what a cruel dysfunctional, and heartless society. I hope the younger people there will learn, but even the younger powerful still think it is prestiage to eat shark fin soup etc. to show status..all very sick.

The Chinese need to come out of the dark ages. They are pushing elephants, rhinos, tigers, panolins all into extinction. Yes, there are others who are responsible for the actual poaching and smuggling, but it is the Chinese who drive the market.

I have never heard nor seen of this animal and how horrific is this world? Once again, the Asian market is to blame. This must be stopped and in this day and age, where is the education with these people ?