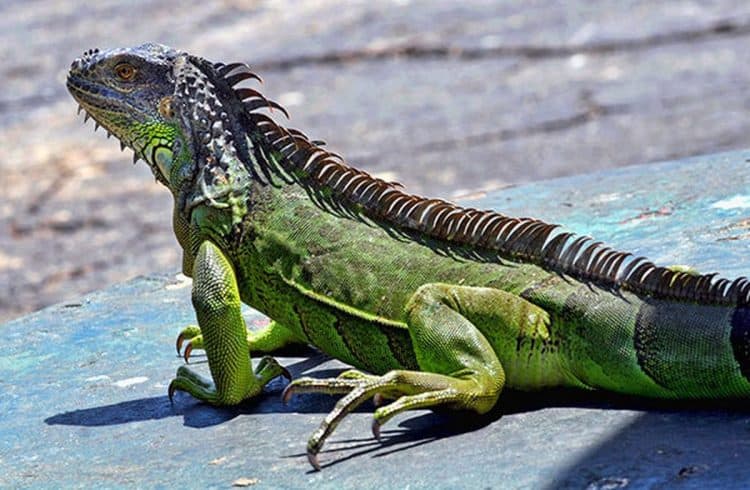 Iguanas living in South Florida have something new to watch out for – a California-based exotic meats operation is setting up shop to take advantage of the invasive population.

Iguanas gather on the seawall in the Three Islands neighborhood of Hallandale Beach.Now that summer’s here, invasive black and green iguanas are infesting South Florida, knocking out power, wrecking gardens, weakening sea walls, getting into plumbing and attics, defecating in pool and causing parasites in pets. They also carry salmonella, botulism. (Mike Stocker / Sun Sentinel)He’s found so much success in Florida that he expects to relocate to Fort Lauderdale by the end of the year.

“Why should I be here (California) when all the iguanas are in Florida?” Pathak told the Palm Beach Post. “It does not make any sense.”

According to the report, Pathak has been buying more than 10,000 pounds of iguanas from Florida trappers each month for the past year.

He processes the meat in his facility in California, where he racks in $60 a pound and $260 for jumbo pieces between 5 and 10 pounds, according to Palm Beach Post.

If all goes as expected, Pathak will process more than double the meat that he did in California, offering iguana tacos, iguana burritos and boneless iguana meat, according to the report.

According to Palm Beach Post, iguanas are not native to South Florida and breed quickly – some female iguanas can lay up to 70 eggs, according to the Florida Wildlife Commission (FWC).

This article was first published by The Orlando Sentinel on 25 October 2019.