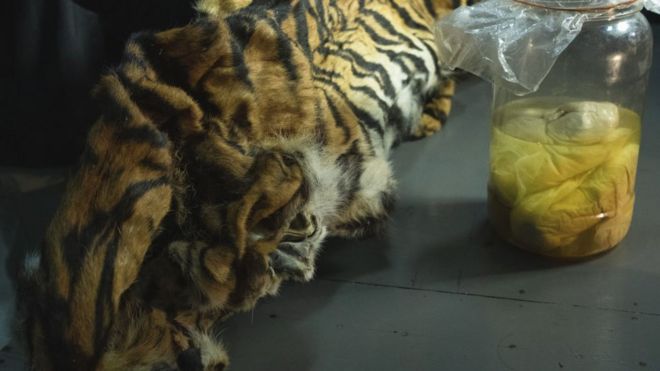 Five people in Indonesia have been arrested for poaching after authorities found the skin of a protected Sumatran tiger and four foetuses in a jar.

Sumatran tigers are critically endangered, with fewer than 400 believed to be left in the wild.

It’s not clear if the foetuses were taken from the adult tiger whose skin was taken.

Tiger cubs are born blind and are totally dependent on their mother for the first few months of their lives.

An official from the Environment and Forestry Ministry said the suspects, from Riau province, were arrested after police received a tip-off.

Two suspects are believed to have been acting as sellers. They face a maximum of five years in prison and a fine of 100 million rupiah ($7100; £5403).

The Sunda subspecies of tiger was once found on the Indonesian islands of Java, Bali, and Sumatra. They are now found only on Sumatra.

According to the WWF: “Accelerating deforestation and rampant poaching mean this noble creature could end up extinct like its Javan and Balinese counterparts.

“In Indonesia, anyone caught hunting tigers could face jail time and steep fines.

“But despite increased efforts in tiger conservation – including strengthening law enforcement and anti-poaching capacity – a substantial market remains in Sumatra and other parts of Asia for tiger parts and products.”

According to wildlife trade monitoring network Traffic, poaching for trade is responsible for almost 80% of Sumatran tiger deaths – amounting to 40 deaths a year.

This article was first published by BBC News on 9 December 2019.