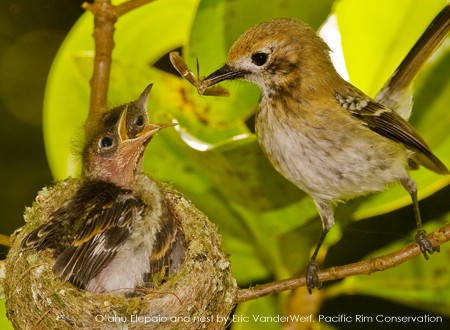 The diminutive ʻElepaio (pronounced “el-a-pie-o”) had remarkable powers, according to native Hawaiians. Canoe-builders considered the bird an incarnation of their patron goddess Lea: If the bird pecked at a fallen koa tree, it was a sign that the tree was riddled with insects and unusable for boat-building. Farmers believed that this insectivorous bird was the incarnation of Lea’s sister goddess, Hina-pukuʻai, a patron of agriculture.

This bold and adaptable bird may indeed follow people when they enter its forest habitat, and quickly learns to exploit feeding opportunities created by human activity. Unfortunately, the Oʻahu ‘Elepaio—an Old World monarch flycatcher—is in serious decline on its native island, where it was once among the most common land birds. Declines have been so severe that the species is listed as Endangered under the U.S. Endangered Species Act. It is also a U.S. WatchList species.

More than half of the O’ahu ‘Elepaio’s former range has been converted to agriculture or urban development. Fires also threaten the remaining suitable habitat. Mosquito-borne diseases such as avian pox and malaria are a problem throughout its range. (Learn more about Hawaiʻi, the bird extinction capital of the world.)

Nest predation by black rats is the most serious current problem, although rat-control efforts have been locally effective at stabilizing the bird’s population. Recent research shows that Oʻahu ‘Elepaio in some areas are evolving in response to rat predation by building their nests higher off the ground.

For millenia, the ‘Elepaio has been a part of the Hawaiian landscape. You can help keep the ‘Elepaio in the picture by joining ABC’s “Keep Birds in the Picture” Challenge. A dollar-for-dollar match will double the value of your gift received by Dec. 31, 2013.