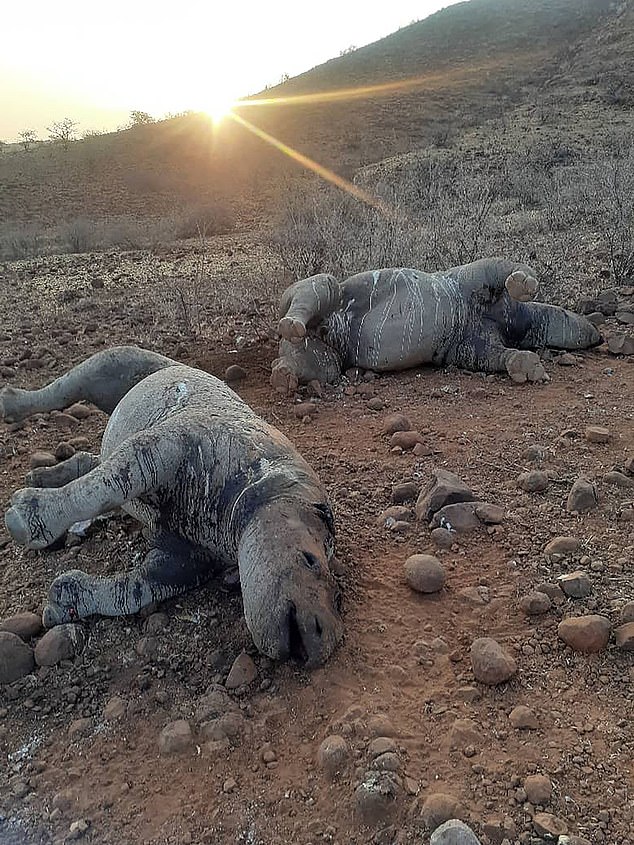 When Prince Harry was seeking to impress Meghan Markle in the early days of their courtship, he took her on a surprise trip to Botswana, the African country he used to call his ‘second home’.

There they celebrated her 36th birthday in a $2,000-a-night deluxe tent at the Meno a Kwena safari camp on the Okavango Delta, with spectacular views over the Boteti River, a popular watering hole for elephants.

It was, by all accounts, an idyllic sojourn, which went a long way towards cementing their relationship.

Three years later, however, in the wake of the emergence of Covid-19, Botswana is in lockdown, its borders closed. With the collapse of the tourist industry, locals in the area surrounding the safari camp have lost their livelihoods and a region once famed for its protection of big game is now a poachers’ paradise.

Map Ives, who set up Rhino Conservation Botswana with Harry as its patron in 2016, is in despair. ‘Donations are drying up and that means reduced anti-poaching patrols,’ he says. ‘We’ve lost six rhino shot by poachers since the pandemic. Botswana security forces have also shot five poachers dead in two other incidents.’

It is a story being repeated across sub-Saharan Africa: countries which rely hugely on tourist dollars — from Kenya, Tanzania, Rwanda, Uganda, Zambia, to Namibia and South Africa — are all suffering economic catastrophe, with the poorest hardest hit.

The African safari industry is expecting a combined loss of £9.5 billion this year, according to the website safaribookings.com, which until the pandemic took hold was offering 10,000 safari packages in 12 countries.

Many camps, hotels and tour companies have not had a single guest since lockdown began in March. This translates to job losses of around 10 million Africans who are employed directly in wildlife tourism, and a further 14 million in associated jobs, such as driving, supplying fruit and vegetables to safari lodges, and selling curios.

Meanwhile, wildlife reserves have become attractive targets for gangs of poachers on the hunt for ivory and rhino horn to sell to Asia.

And it’s not just organised poaching. Families in villages once sustained by the safari trade are increasingly killing wildlife for food.

Experts say the pandemic is testing conservation to breaking point across the continent, with the loss of funding bringing a halt to patrols by anti-poaching units.

Nowhere is this more in evidence than in Botswana. Map Ives says the absence of tourists and guides in the reserves mean ‘the loss of hundreds of sets of eyes and ears’.

In normal times the poachers watch the safari camps and see tourism activity in the Delta, and this helps to deter them. But now we have lost all that.’

In remoter areas of the region where Harry and Ives ‘collared’ rhinos for tracking purposes by day and camped out at night, armed gangs of poachers are sufficiently emboldened to make daily incursions equipped with power saws. Rhinos are shot and their tusks crudely sawn off, leaving the animals to bleed to death as our horrific picture shows.

This cruel harvest then goes towards satisfying China’s vast market for rhino horn — there it is ground into powder and sold as ‘medicine’. In an unexpected twist, the pandemic has sparked a boom in demand, with sellers claiming it can cure the coronavirus.

Traffic, the leading authority on the illegal wildlife trade, reports that rhino horn is being processed into beads, bangles and bracelets to evade detection before being sent to the Far East where it is valued at up to £46,300 per kg.

Lions are also targeted for their skins, claws, teeth and bones to feed a lucrative new Asian market fuelled by the belief that these, too, have medicinal value.

Another of Prince Harry’s favourite wildlife retreats is the vast northern desert of the Kunene province in Namibia.

Simson Uri-Khob, CEO of Save The Rhino trust, spent five days camping in the bush with the Prince in 2015 and saw at first hand his passion for conservation.

‘We talked about the desperate need to keep species safe,’ he said. ‘Harry was well-informed, wanting to make a difference. He would grieve to see what is happening today. The world has come to a standstill for us, we have no guests at our rhino camps.

‘We have nothing to spend on our conservation efforts, donor money has dried up. Within a month of coronavirus we found four rhino carcasses at our Purros Camp. This is the first time for three years that poachers have been able to make kills.

‘A poacher will never shoot a rhino in front of tourists, but now the tourists have gone. With less boots on the ground it feels like we are losing the battle.

‘We have arrested some poacher suspects but our long-term prediction is not good. We will have to just struggle on one year at a time.’

Elsewhere, the authorities are fighting back. One day in late August, an overloaded fishing boat worked its way at dawn through the treacherous waters of Lake Victoria with an illicit cargo: six sacks of elephant tusks worth many thousands of dollars.

On board, a terrified young woman was working undercover, risking everything to try to stop the deadly trade. People like Akinyi — not her real name — are the latest recruits in the battle against poaching. She had spent the night holed up with a ruthless gang in the fishing village of Lumino on the lake’s Ugandan shore.

Their rampage through Ruma national park in Tanzania had seen them kill an estimated six elephants, take a power saw to their tusks and make off with a huge haul.

The tortuous trip by boat to pick up other gang members and supplies had seen them arrive in Lumino by nightfall. There they had hidden in a fisherman’s hut.

Akinyi, a single mother, expected to see them arrested by security forces waiting at Busia across the border into Kenya thanks to her tip-off. Within three hours she would be free.

Promised anonymity, she told the Mail: ‘It all went wrong. I heard the roar of a big speedboat engine and then the Ugandan police were beside us in a patrol boat.

‘The men with me panicked and everyone was shouting. They threw the sacks of ivory overboard and by the time the police caught up there was no evidence. We were escorted at gunpoint back to the shore and the gang paid bribes to get us released. I felt I had failed on that trip, but I have good information about another big raid, so I will go on.’

Akinyi could not pinpoint the place where the precious cargo was dumped and her ‘handlers’ in the Mara Elephant Project (MEP) accept it will now never be found.

‘Lake Victoria has 68,800 sq km of surface area, we’ll never find that ivory,’ says CEO Marc Goss. ‘But we have a growing network of courageous informants like her. We get good info and we bring in Kenyan authorities to make the arrests. Recruits like Akinyi are our only hope of making a difference.

Armed soldiers and airlifts: Radical plans to save the animals
South Africa is the only country on the continent to report a decline in poaching during the pandemic, and attributes it to armed soldiers patrolling its national parks, and to de-horning rhinos.

In Kruger National Park, not one rhino was lost to poachers in the month of April.

Despite that, Kruger lost 88 rhinos in the first six months of 2020 in its ongoing battle against big crime syndicates.

Customs officials, armed police units and the revenue service all work together to hunt down illicit consignments and arrest shipping agents,.

At a national park in North West Province, helicopter pilot Nico Jacobs, who airlifts baby rhinos orphaned by poachers to safety, told the Mail: ‘We’ve managed to halt the poaching.

‘Not one rhino was lost in the past four months and that is due to the government recently approving a de-horning programme.

‘It feels like we are saving lives, and saving the local economy for the day when tourists come back.’

‘Through her we knew that 15 big pieces of ivory were coming through. It was a tense time, we really wanted to catch this gang but the lake made it difficult. She had a tough job to do, we had to reassure her we’d be there at the destination in Busia.

‘Then the Ugandan police got involved and it was out of our hands. This is a critical time and you don’t know who to trust with information. We lost that haul of ivory and the chance to round up some criminals but there will be other times . . . It’s a battle in a long war, now that Covid is working against us.’

The MEP has since made significant arrests, recovering 96kg of ivory in one confrontation two weeks ago at Mount Kenya National Park.

Meanwhile, Peter Lindsay, director of the Lion Recovery Fund, has warned that ‘increased poverty and food insecurity, coupled with the influx of people from the cities to their rural homes during lockdowns is increasing pressure on all natural resources.

‘Apart from poaching we will see increases in other illegal activities such as logging, artisanal mining and illegal livestock grazing in wildlife areas.’

Harry’s mentor Map Ives accepts that poor local communities are coming into the conservation areas and illicitly hunting animals for food, and understands their needs.

‘Commercial poaching is another matter,’ he says. ‘These are not terrorists, nor enemy soldiers, not people in dire need. They are criminals. They are now operating in our tourism hotspots.

‘These are ruthless, organised and merciless groups who use every possible lever they can to make money from the natural earth.’

Wilderness Safaris, which works with local communities in Botswana and neighbouring countries and has used funds from its luxury safari camps to relocate rhinos to safe areas, reports that its anti-poaching units in Hwange Park, Zimbabwe, only have funding for the next eight months.

Sustainability manager Neil Midlane says: ‘Now there is absolutely no revenue. Normally we would have multiple game-viewing vehicles going out for eight to ten hours a day making poaching risky. Now that risk has been removed.’

A particular outrage was the killing in June of a silverback gorilla named Rafiki, the leader of a group of 17 gorillas in Uganda’s Bwindi Impenetrable national park. Four poachers were arrested and face a life sentence or fine of £4.3 m if found guilty of killing an endangered species.

Neil Midlane adds: ‘We need arrests, but the hardball approach won’t work when it comes to starving people. We need to get food out to them, that’s our most effective intervention.’

Professor Keith Somerville, a member of the Durrell Institute of Conservation at the University of Kent and a Fellow of the Zoological Society of London, goes further. He believes that poor communities who have lost their entire income will be drawn into the organised poaching gangs.

‘The depletion of charismatic species like elephant, rhino and lion will in turn impact wildlife tourism in the future,’ he said. ‘As the coronvirus pandemic worsens the threat can only increase.

This article was first published by The Daily Mail on 18 October 2020. Lead Image: Victims: Rhino corpses in Namibia last month with their horns chopped off. Experts say the pandemic is testing conservation to breaking point across the continent, with the loss of funding bringing a halt to patrols by anti-poaching units.