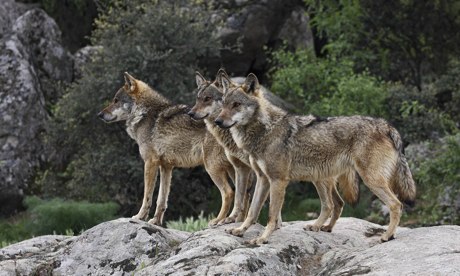 A twig snaps, a crow calls, but nothing moves in the dense pine forests of Spain’s Guadarrama mountains. Vultures and eagles soar over the snowcapped peaks and wild boars roam the valleys below, as they have for centuries. But for the farmers who work this land, a threatening and worrying comeback is taking place in this timeless landscape, home to Spain’s newest national park.

After an absence of 70 years, the wolf is back in the Guadarrama hills and breeding just 40 miles from Madrid.

There have been sightings for several years of lone males, but camera traps recently picked up a family of three cubs, two adults and a juvenile. To the consternation of the farmers who believed that this ancient foe had left the hills for ever, breeding packs are expected to follow. The bloody results are plain to see. In the past two months around 100 sheep and cattle have been killed near Buitrago, in the northern foothills of the Guadarrama mountains, says Juan Carlos Blanco, a wolf specialist and adviser to the Spanish environment ministry.

“Guadarrama can support two, even three, packs. We think there are now six packs within 100km of Madrid. When they arrive in a new area the shepherds do not know what to do. Then they find ways to protect their flocks with dogs or fences. It’s a natural event and the wolf will not go away now,” he says. “Maybe hunters will exterminate one pack, but others will take its place. Wolves are very flexible and resilient.”

Spain is now a wolf stronghold. While the population had diminished to just a few packs in isolated regions in the 1960s, there are now thought to be more than 250 breeding groups and more than 2,000 individuals.

“As wolf numbers grow so does the number of attacks on animals. From 2005 there were about 1,500 attacks a year. Then in 2008 it jumped to over 2,000,” says Luis Suárez, WWF biodiversity officer in Madrid. “In the past seven years 13,000 sheep, 200 goats and several hundred cows have been attacked across Spain.”

In the 19th century the European wolf was almost driven to extinction as hunters made a living from the bounties paid by villagers. But conservationists are surprised at how fast wolves have returned during recent years, populating areas where they were last seen more than 100 years ago.

Wolf populations in Europe quadrupled between 1970 and 2005 and there may now be 25,000 animals, says the International Union for Conservation of Nature. They have been seen within a few miles of major cities including Berlin, Rome and Athens. Last month one was found near the Dutch hamlet of Luttelgeest, just 30 miles from Holland’s densely populated North Sea coast.

They are also reportedly expanding their range in France, Germany, Poland, Scandinavia and Italy, with sightings in Belgium and Denmark. In the past 10 years, says Blanco, wolves have arrived in the Pyrenees from Italy and the Alps. “They have crossed 450km and a lot of roads to get there. So far they are not breeding there, but it’s only a matter of time,” he says.

In Germany, where they were hunted out of existence in the 19th century, there are now thought to be around 160 wolves in 17 packs in the state of Brandenburg. Cubs were born last year in Heidekreis in Lower Saxony for the first time in 150 years, and there were sightings in the states of Hessen and Rheinland-Pfalz.

“The wolf has been able to reclaim territory in the Alps by crossing over from Italy and it has now spread as far as the Lozère region in central France. In 2012, individuals from the Alpine population formed the first pack in 150 years in the Calanda mountains of Switzerland and four cubs were confirmed to have been born this year,” says a report from the Zoological Society of London and others.

Wolves traditionally flourish in times of political and economic crisis. Their return to Europe in the past 20 years is thought to be linked to widespread rural depopulation and the collapse of the Soviet Union. The demise of the USSR saw a near 50% increase in the number of wolves in the 1990s, as animals that had been kept under control by state-sponsored culling were left to roam unchecked and many packs crossed into sparsely populated areas of Poland, Germany and Scandinavia.

Some conservationists say the economic recession in Spain, Portugal, Greece and elsewhere has also helped them spread into new areas. “People have migrated from rural areas, allowing the wolf to reoccupy abandoned land. The recession has left less money for farmers to protect their animals, says Suárez. “More money in the economy means more money for protection. Worse circumstances in the recession have seen a progression of rural people to the cities and an increase in wolf numbers,” he says.

“Land is being abandoned. The woods regrow, so there are more deer, less hunting pressure, and more food for wolves,” says Peter Taylor, British ecologist and editor of Rewilding journal, who lives in the Czech Republic. “Wolves are returning to many of their old haunts in Europe and also wandering into long-forgotten territory. There are breeding pairs now in Germany, Slovakia, Poland, Romania, Croatia, Alpine Italy, the Apennines and Alpine France,” he says.

“Wolves have always been hated by country people, but they do not threaten people,” says Blanco, who expects to see numbers continue to grow in the next decade. “We must help farmers tolerate them,” he says. But the image of the wolf as a danger to be exterminated is strong in countries to which it has recently returned. Its re-emergence has pitted conservationists against farmers furious that wolves are killing their livestock.

“It leads to resentment among older people left in villages where the young have moved to the cities,” says Taylor. “In contrast to lynx and bear, nobody has tried to reintroduce wolves – they just wander in. They are seldom welcome. They remind older people of hard times – a sign that civilisation is slipping backwards perhaps.”

Wolves are a protected species and most countries offer to compensate farmers for the animals they kill. But many are now being hunted illegally and poisoned. Farmers and shepherds invest in fences and fierce dogs to protect their animals, says Taylor. “They have lost the habit of defending their flocks. In areas where wolves never disappeared, they have always had some losses, but they are used to protection. Farmers are more desperate because the prices they get are low.”

Suárez adds: “Officially, 130 wolves have been killed [since 2005] in Spain, but the real numbers are unknown. They are being poisoned.”

María Vázquez, who works with farm advice group Asaja in Aviola, helping farmers with electric fences and dogs, says: “We’re not against wolves, but we need help. The number of attacks on livestock is growing.”

As their populations grow, the wolves’ best friends may be tourists flocking to Guadarrama and other conservation zones. The animals’ presence just a few miles from city centres is proving popular with politicians and a draw to city residents. Visitor numbers to Guadarrama and other wild areas in Europe where wolves have moved in are growing fast, and governments are mostly happy to invest in modest protection measures in return for being hailed as friends of the environment.

“Their return to Guadarrama is a good thing, but for people with animals it’s trouble. We are willing to pay subsidies,” says Spain’s environment secretary, Federico Ramos. “We have to understand that ideas about the wolf are changing. In the past they were a serious problem, but now people are sympathetic. It’s not the devil; it’s just an animal. We must learn to live together.”

This article was written by Paul Evans for the Guardian.