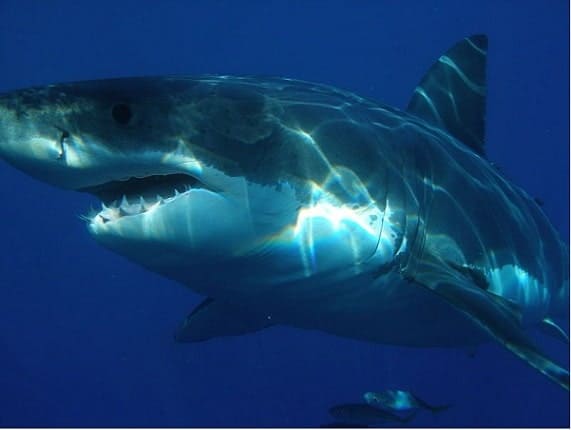 We are alarmed by the recent decision by the National Marine Fisheries Service (NMFS) not to provide needed protections for U.S. West Coast great white sharks under the federal Endangered Species Act.

NMFS declined protections despite current science estimates of only a few hundred sub-adult and adult white sharks at their primary aggregation sites.

The Endangered Species Act (ESA) petition submitted by Oceana and its partners to NMFS met all the legal criteria and demonstrated through the best available science that this special population of great white sharks clearly warrants protections under the ESA.

Despite this unsettling federal decision, the fight to protect great white sharks is far from over. For many imperiled species, the battle to secure federal ESA protections has taken many years, and Oceana will continue to use all available tools to protect white sharks until we are convinced they are safe from extinction.

A similar petition we submitted to the California Fish and Game Commission in August 2012 resulted in California’s great white sharks being protected for a year under the California Endangered Species Act as a candidate specieswhile the state considers permanent actions. This means our ocean’s most iconic shark currently receives the exact same legal protections under state law afforded to other listed endangered species—at least for now. Thank you to the more than 44,000 of you who urged the Commission to provide this candidacy status.

Protections as a candidate species are only temporary and will expire in early 2014, unless the California Fish and Game Commission votes to officially list these sharks as an endangered species. The California Department of Fish and Wildlife is currently working on their own population status review and from that analysis will make a recommendation for action to the Fish and Game Commission. This is where we need your help.

Please sign a letterto both the California Department of Fish and Wildlife and the Fish and Game Commission urging them to maintain protections for great white sharks by providing this unique population with official listing status under the California Endangered Species Act.

Our ocean needs great white sharks. They are important to maintaining healthy and diverse oceans and play a critical top-down role in structuring the marine ecosystem by keeping prey populations, such as sea lions and elephant seals, in check—further benefiting our fisheries and abundant wildlife. New scientific studies recently affirmed by the National Oceanic and Atmospheric Administration (NOAA) show that great white sharks off the U.S. West Coast are a truly unique population—both genetically distinct and isolated from all other great white shark populations worldwide. Peer-reviewed population estimates indicate there may be only a few hundred adult sharks in this West Coast population. These numbers are far lower than estimates for many species already listed under the ESA.

Researchers believe young great white shark “pups” spend their first couple years in the warm ocean waters off Southern California and Northern Mexico, where they feed on several species of forage fish like squid, mackerel, anchovies, sardines, and hake. It is also believed that these essential nursery grounds may also serve as birthing sites for great whites. Unfortunately, some of our less selective fishing methods, such as set gillnets, overlap with great white shark nursery grounds, and continue to catch and entangle great white shark pups. In fact, most of the reported bycatch of white shark pups occurs in these gillnets, which are intended to catch halibut, white seabass, and other commercial fish. While it is illegal to intentionally catch and sell white sharks in California, there are currently no limits on bycatch and not enough fishing vessels have observers on board to document the extent of this take.

Great white sharks take about a decade to reach maturity, grow slowly, and birth few young over their lifetime. These factors, in conjunction with their bycatch in gillnet fisheries, are jeopardizing this unique population of great white sharks off California.

Official California endangered species status will bestow additional protections to white sharks, including establishing better monitoring and reasonable management to reduce fishery bycatch and help garner funding for additional research to better understand some of the mysterious secrets these iconic sharks still keep. While the federal government made the wrong decision, the state of California has proven to be a conservation leader and still has the opportunity to do the right thing for great white sharks.

Again, thank you for your continued support for California’s great white sharks.

This article was written by Ashley Blacow for Oceana.org