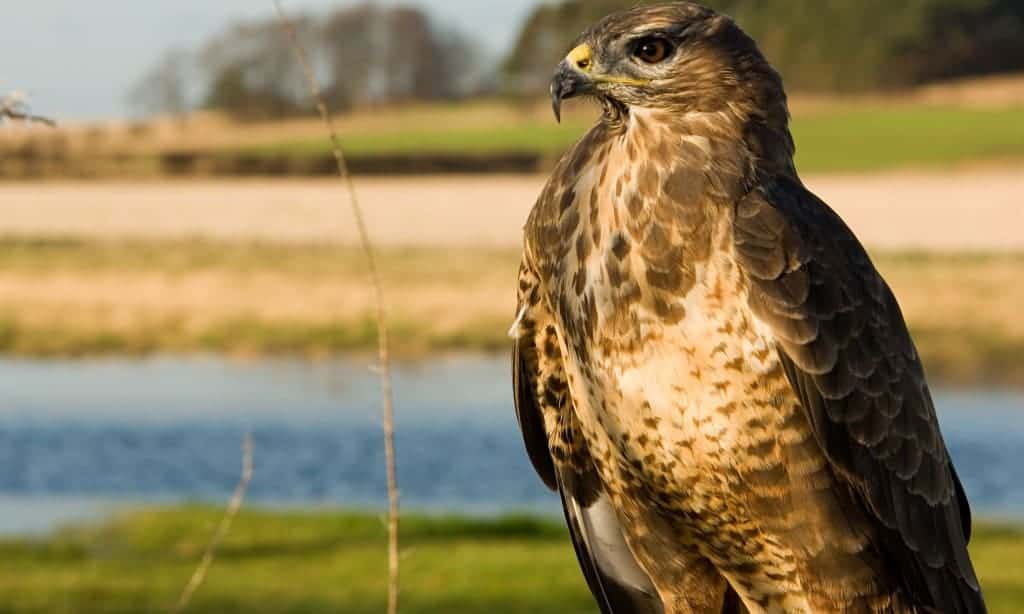 A gamekeeper found with a bag of nine dead buzzards on a pheasant-shooting estate has been found guilty of intentionally killing a protected species in what is England’s worst recorded case of poisoning birds of prey.

Allen Lambert, gamekeeper for 24 years at the Stody Estate in Norfolk, will be sentenced next month after being convicted of killing 10 buzzards and a sparrowhawk. Lambert was also found guilty of possessing illegal pesticides and other equipment including a syringe for injecting poison into eggs or meat baits, which prosecutors described as a “classic poisoner’s kit”.

Norwich magistrates court heard how an RSPB investigator alerted Norfolk Police after a tip-off in April 2013 led to the discovery of carcasses of five buzzards, a sparrowhawk, a tawny owl and a stoat close to pheasant feeding bins on the award-winning 4,500-acre estate.

When police searched outbuildings around the gamekeeper’s cottage, they discovered a sack of pheasant feed on a quad bike filled with nine dead buzzards. A government vet judged they had been killed within the previous fortnight.

They also found a banned agricultural pesticide, mevinphos, in Lambert’s Land Rover, and another illegal pesticide, aldicarb, in a garage. Both substances have been illegally used in other cases of poisoning of birds of prey across Britain and post-mortems found traces of mevinphos in all 11 dead birds. Several other buzzard carcasses found on the estate were too decayed to be analysed.

Lambert, 65, who retired some months after his arrest, pleaded guilty to the illegal storage of banned pesticides and the unlawful possession of nine dead buzzards but maintained his innocence over the poisoning, telling the court that the birds had been planted “belly up” on the estate by a local dog-walker who bore a grudge against him. Lambert told police he had only deployed the illegal poison found in his vehicle once, seven years earlier, when he placed it inside a dead rat to kill “a tricky fox”.

Persecution drove buzzards to extinction in southern and eastern England, but since the early 1980s the bird has staged a remarkable comeback and is now found across the country. Britain’s buzzard population increased eightfold between 1993 and 2013.

A study has found 1 to 2% of young pheasant deaths are caused by birds of prey and Lambert told the court he did not consider the thriving buzzard population a threat to the pheasants, which he managed for the MacNicol family, who own the estate. John Hughes, for the defence, said Lambert was approaching retirement and had “no economic reason” to slaughter the buzzards.

But district judge Peter Veits ruled Lambert’s explanation of “a vendetta against him” was implausible and said he “found it hard to imagine” that the gamekeeper would be so unaware of the incriminating and illegal poisons kept in his sheds.

Noting that Lambert told the court he never received any pesticide training, the judge said he would take into account the “total lack of supervision” by his employer when sentencing next month.

“There would appear to be a complete lack of control over poisons on the estate,” the judge told Lambert. “In many other ways your employers might have been in the dock themselves for some of these offences involving poison on their property.”

After the verdict, Bob Elliot, head of investigations at the RSPB, said: “Unfortunately, this is part of a wider national problem. In 2013 we recorded 76 individual birds and other animals illegally poisoned, including 30 buzzards and 20 red kites. We are now calling on the UK government to show their commitment to the protection of birds of prey by introducing stronger legislation, such as increasing controls on people who possess pesticides used to poison wildlife such as mevinphos and aldicarb. This could be vital in the fight against illegal persecution.”

This article was first published by The Guardian on 02 Oct 2014.