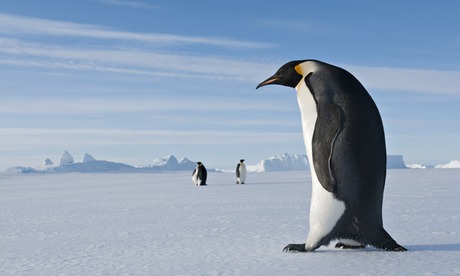 A penguin species that lived millions of years ago would have dwarfed today’s biggest living penguins and stood as tall as most humans, according to analysis of fossils by a team of researchers from the La Plata Museum in Argentina.

Palaeeudyptes klekowskii has already been dubbed the “colossus penguin”, and is the most complete fossil ever uncovered from the Antarctic. The unearthed bones are 37m years old and include the longest recorded fused ankle-foot bone as well as parts of a wing bone.

From those bones, researchers estimated the species would have stood 2m tall from toe to beak tip, and weighed as much as 115kg. Standing normally, beak down, the penguin would have be around 1.6m tall, the team reported in the journal Geobios.

Being of a larger build has its advantages, as bigger penguins could dive underwater to hunt fish for significantly longer periods of time compared to smaller species. A penguin the size of Palaeeudyptes klekowskii could stay underwater for up to 40 minutes.

The bones were found at the La Meseta formation, Seymour Island, which is part of the Antarctic peninsula with a wide range and abundance of penguin bones. In prehistoric times, the region was warmer with 10 to 14 different penguin species living together.

Palaeeudyptes klekowskii is not the only giant prehistoric penguin to be discovered – in 2007 of a penguin species known as Icadyptes salasi, was found in Peru, living 36m years ago. It had a slightly smaller height of 1.5m.

This article was written by Nishad Karim for The Guardian.