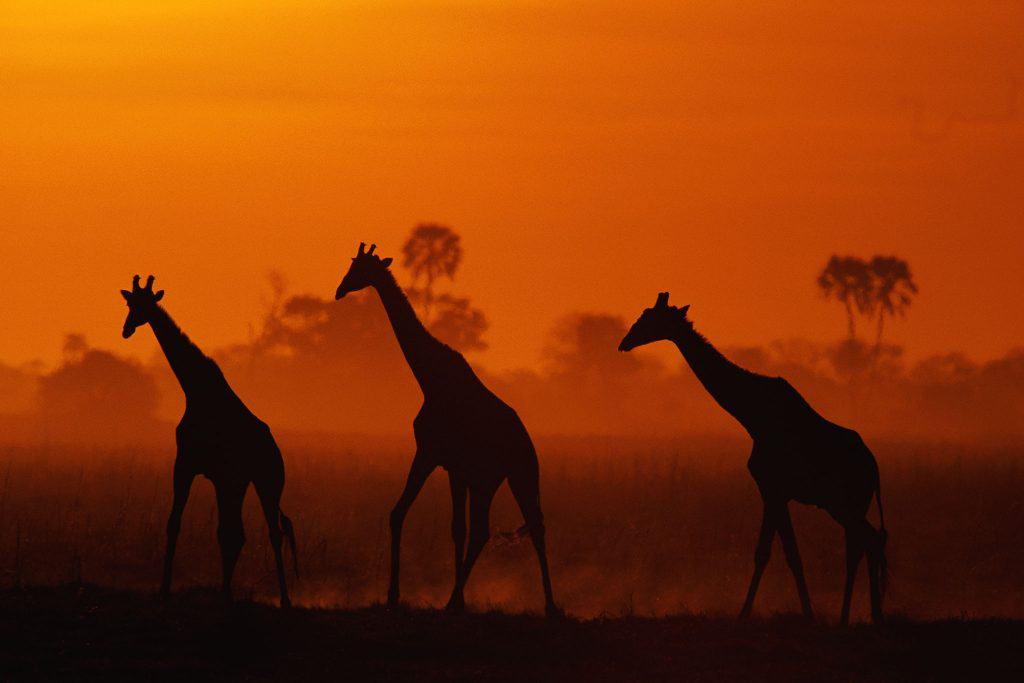 The world’s tallest animal is at risk of extinction after suffering a devastating decline in numbers, with nearly 40% of giraffes lost in the last 30 years, according to the latest “red list” analysis.

The authoritative list, compiled by the International Union for the Conservation of Nature (IUCN), has also added more than 700 newly recognised bird species, but 13 of these are already extinct.

It says wild relatives of important food crops, such as mangoes and sunflowers, are now in danger of extinction, cutting the ability to safeguard food supplies by breeding new varieties resilient to drought and disease.

But there is a little hopeful news in the list as well with the rediscovery of a few species thought to have been lost, such a Madagascan freshwater fish which had not been seen since the 1960s, and the recovery of the Seychelles white-eye bird after conservation efforts.

The natural world is in the midst of a mass extinction as wild places are destroyed by conversion to farmland, mining and pollution, and animals are hunted in huge numbers. In October, a major analysis found the number of wild creatures was on track to fall by two-thirds by 2020, compared to 1970. Recent red list updates have found the eastern Gorilla and whale shark moving closer to extinction, while the prospects of the giant panda are improving. 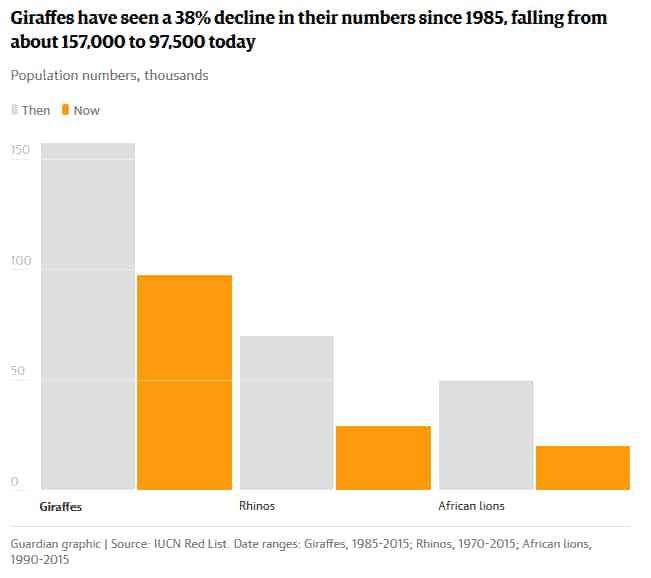 The number of species assessed by the red list now totals more than 85,000, with more than 24,000 at risk of extinction, but many more species remain unstudied. “Many species are slipping away before we can even describe them,” said Inger Andersen, IUCN’s director general.

“This red list update shows that the scale of the global extinction crisis may be even greater than we thought,” she said. “Governments gathered at the UN biodiversity summit [at which the update will be presented on Thursday] have the immense responsibility to step up their efforts to protect our planet’s biodiversity – not just for its own sake but for human imperatives such as food security and sustainable development.”

The new red list found the giraffe population had plummeted from about 157,000 to 97,500 in the last 30 years and the species had jumped two IUCN categories from “least concern” to now “vulnerable”. As the human population in Africa rises, habitat loss from farming and deforestation, illegal hunting and the impact of civil wars are all pushing the creature towards extinction.

“Whilst giraffes are commonly seen on safari, in the media and in zoos, people – including conservationists – are unaware that these majestic animals are undergoing a silent extinction,” said Julian Fennessy, co-chair of the IUCN’s giraffe and okapi specialist group. “It is timely that we stick our neck out for the giraffe before it is too late,” he said.

Sir David Attenborough said in June: “These gentle giants have been overlooked. It’s well known that African elephants are in trouble and there are perhaps just under half a million left. But what no one realised is there are far fewer giraffes, which have already become extinct in seven countries.”

The updated red list also includes a reassessment of all bird species, bringing the number analysed to over 11,000. More than 700 of the species were newly recognised, including the Antioquia wren from Colombia which was listed as endangered because more than half of its habitat could be destroyed by a single planned dam.

Thirteen of the newly listed bird species are already extinct, including the Pagan reed warbler, having been wiped out by predators such as snakes introduced to their island homes. “As our knowledge deepens, so our concerns are confirmed: unsustainable agriculture, logging, invasive species and other threats – such as illegal trade – are still driving many species towards extinction,” said Ian Burfield, global science coordinator at BirdLife.

The African grey parrot is one of the species at grave risk from hunting as it is prized as a talkative and long-living pet. In some regions, numbers have plunged by 99% but all international trade in the bird was banned in October. The cage bird trade in Asia is also driving many feathered species towards extinction, including the spectacular sunset lorikeet.

However, conservation efforts are cutting the risk to some of the rarest birds on Earth, including the Seychelles white-eye, which was once thought to be extinct but now numbers about 500 thanks to reintroduction programmes.

The new red list includes, for the first time, assessments of 233 wild relatives of crop plants. It found many were threatened by the expansion of farms into wild areas. The wild relatives are a crucial source of genetic material for breeding new varieties that can withstand climate change and pests and which may be needed to help feed the world’s fast-growing population.

Mangoes are a vital crop around the tropics but scientists found four wild mango species are endangered – the Kalimantan mango has already become extinct. Also in trouble are wild relatives of the sunflower, such as the Anomalus sunflower, the chickpea and asparagus. “This only erodes future options for new crop resources under changing climates,” said Thomas Lacher Jr from Texas A&M University.

Separate new research lays bare the influence of humanity in transforming the planet, with scientists finding that over 50% of the world’s land area is now dominated by human activity, with 9% of this change happening in the last 25 years alone.

While 1.7m sq miles (4.4m sq km) of wild habitat was lost in the last 25 years, the researchers found that protected areas increased by 2.7m sq miles, almost doubling to cover 14% of all land.

But the protected areas are often not in the most vital regions, said James Watson of the Wildlife Conservation Society and the University of Queensland. “Nations tend to place protected areas in remote locations, where nobody else is vying to convert the land. This does not help save threatened biodiversity and we must urgently start placing new protected areas in places that will be destroyed without conservation action.”

This article was first published by The Guardian on 08 Dec 2016.