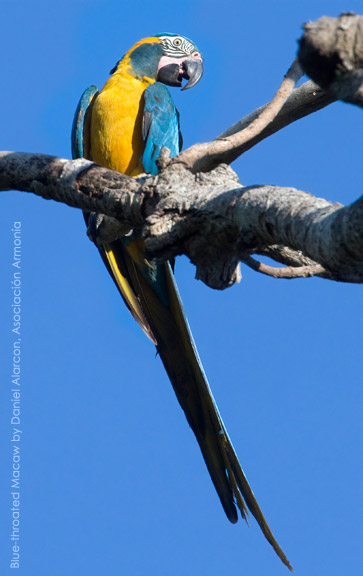 A reserve that is home to the world’s largest population of the critically endangered blue-throated macaw (Ara glaucogularis) has been more than doubled in size, reports the American Bird Conservancy (ABC), a group that helped fund the expansion.

Barba Azul Nature Reserve now protects 11,000 hectares (27,180 acres) of savanna in Bolivia’s Beni wetlands after a coalition of groups, foundations, and agencies raised enough money to buy 6,000 ha (14,820 acres) of additional land. The new protected areas include seasonally flooded savanna and islands of tropical forest, which serve as critical foraging habitat for the blue-throated macaw, which is one of the planet’s rarest parrot species.

Nearly 100 blue-throated macaws have been recorded in Barba Azul on occasion, according to ABC, meaning that more than half the world’s surviving population of 100-150 birds may be found in the reserve at any given time. The species, which is most endangered by habitat loss and the pet trade, is now the target of a conservation program that involves protecting habitat and building artificial breeding sites like nest boxes.

Barba Azul also serves as habitat for a number of other animals, including 250 species of birds and 27 medium and large mammals.