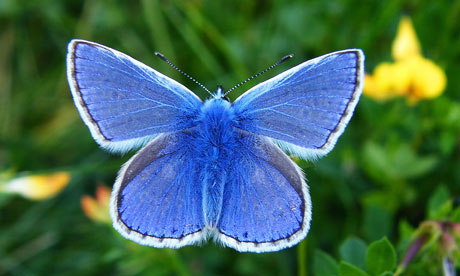 Europe’s grassland butterfly population has plummeted in the past two decades, new research published on Tuesday shows, with a near halving in the numbers of key species since 1990. The precipitous decline has been blamed on poor agricultural practices and pesticides, by the European Environment Agency, which carried out the research.

Falling numbers of butterflies are bad news not just for nature-lovers and for biodiversity, but have a knock-on effect on farming, as – like bees – they act as pollinators, and their disappearance harms birds and other creatures that need them for food.

Butterfly populations are a leading indicator of the health of other insect species. The new study therefore suggests many other species of insect, which are also food sources for birds and small mammals, and which play a key role in the health of the countryside, are also under threat.

Scientists from the EEA, the European Unoin’s environment watchdog, looked at 17 key species of grassland butterflies, of which seven were common species and 10 more specialist, using data gathered from 1990 to 2011 in 19 European countries. Of the total 17 species, eight have declined, including the common blue, which has suffered a serious fall in numbers; two species remained stable, including the Orangetip; and only one increased. The trend for the remaining six species is still uncertain, including the much-appreciated Lulworth skipper, beloved of butterfly watchers.

Grassland butterflies make up the majority of butterflies in Europe, with over 250 species out of the more than 400 found in Europe. Others species prefer to colonise woods, wetlands, heaths and other habitats. Chris van Swaay, one of the authors of the report, from the Dutch conservation organisation De Vlinderstichting, said that the same pesticides that affect bees – leading to the EU to ban certain products, at least temporarily – also have an effect on butterflies. “The pesticide problem is especially a problem in the intensive agricultural areas of western Europe,” he said. “In eastern Europe, it is less of a problem.”

Grassland species are also particularly important because so much of EU land is given over to agriculture: if butterflies cannot thrive on farmland, they will suffer dramatic declines. The EEA warned that as a result of intensive practices, with the aggressive use of pesticides and other chemicals, the loss of hedgerows, field margins and other semi-wild areas, as well as the monocultures prevailing in many areas and the rapid turnover of land, many large areas of farmed land are becoming “sterile” in terms of biodiversity.

The EEA, which worked with conservation charities such as Butterfly Conservation Europe to put together the European grassland butterfly indicator, said that in some areas of affluent north-western Europe, agriculture had become so intensive that butterflies are now confined to marginal land such as road and rail verges and even urban gardens, as well as the small proportion of farmland that is managed with environmental aims in mind.

Hans Bruyninckx, executive director of the EEA, said: “This dramatic decline in grassland butterflies should ring alarm bells – in general Europe’s grassland habitats are shrinking. If we fail to maintain these habitats we could lose many of these species forever. We must recognise the importance of butterflies and other insects – the pollination they carry out is essential for both natural ecosystems and agriculture.”

Perhaps surprisingly, intensive agriculture is not the only threat to butterflies – the abandonment of previously cultivated agricultural land, in central and southern Europe, is also a problem when it results in the neglect of key grassland habitats. When farmland is abandoned, it rapidly turns to scrub, and Europe’s grassland butterfly species have evolved over millennia to live on grassland, including land under old forms of cultivation that were less intensive.

Paul de Zylva, nature campaigner at Friends of the Earth, said: “Bees, butterflies and pollinators in general are facing decline across Europe for the same reasons – loss of habitat, intensive farming and the use of pesticides. Unfortunately the recently reformed Common Agricultural Policy is worse for wildlife than its predecessor. European governments must stop using tax-payers’ money to prop up a farming system that isn’t doing enough to protect nature and biodiversity.”

This article was written by Fiona Harvey for the Guardian UK.