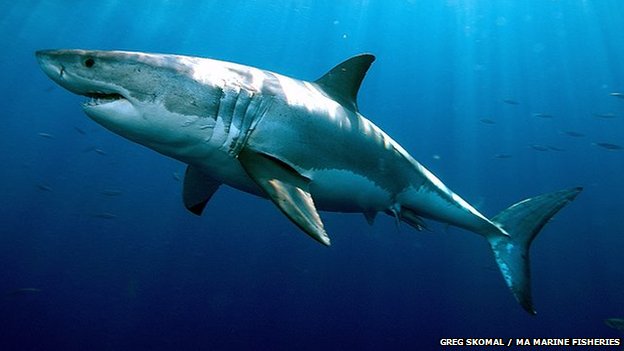 Great white sharks live far longer than was previously thought. Using a new technique to age the tissues of these impressive creatures, scientists have identified a male great white that lived into its 70s. The researchers say the finding has important implications for the animals’ protection.

Knowing the longevity of a species, how fast it grows and when it reaches sexual maturity is vital information for designing conservation programmes.

“These creatures are amazing and it’s fascinating to study them,” said Li Ling Hamady, who is part of a joint programme between MIT and the Woods Hole Oceanographic Institution in the US.

“Everyone thinks they know these animals so well, and the public perception is that they’re either loved or hated. But in terms of the science, we’re only just now beginning to understand what they eat, where they go and how long they live,” she told BBC News.

Scientists have tried to age the spectacular predators by counting annual growth rings in their tissues, such as in their vertebrae. But the sharks’ cartilage skeleton makes the division between these rings hard to discern even under the microscope.

Now, Ms Hamady and colleagues tell the journal Plos One that they made these rings easier to read by looking for a known radioactive marker.

This is a type, or isotope, of carbon atom that was produced in the fallout from the atmospheric nuclear bomb tests in the 1950s and 1960s.

It would have gone into the ocean and been incorporated into the tissues of marine animals living through that period. The scientists used the easy-to-detect radioactive carbon as a kind of date stamp to help them count and calibrate the growth layers better and thus determine the age of their test samples.

“I always think the vertebrae are remarkably small for such a big animal,” explained Ms Hamady.

“Also, as they get older and larger, the sharks either stop laying down material or the layers become so thin they’re really difficult to see. It’s very fine work. I’m using a microscope and a razor and even then it’s hard to get annual resolution.”

All these animals came from the Atlantic, but the researchers do not think there are any significant differences between the lifespans of the sharks living in the three big ocean basins.

Assuming they do live into the 70s in a normal lifetime, white sharks may now be considered among the longest-lived of all cartilaginous fish.

These icons of the sea have suffered some bad press down the years, very often unfairly, and like many of the world’s sharks have come under increased hunting pressure.

According to the IUCN list of threatened species, great whites are considered “vulnerable”.

But if, as now seems likely, they are slower growing and later to mature than was previously recognised, it means also that great whites would find it harder to recover their numbers if populations are depressed because of fishing, environmental and other pressures.

Ian Fergusson, a founding patron of the Shark Trust, commented: “White sharks have a fairly low fecundity in terms of litter size. Typically, females might have a handful of pups per litter, and we’re not sure how often they even get pregnant in a lifetime.