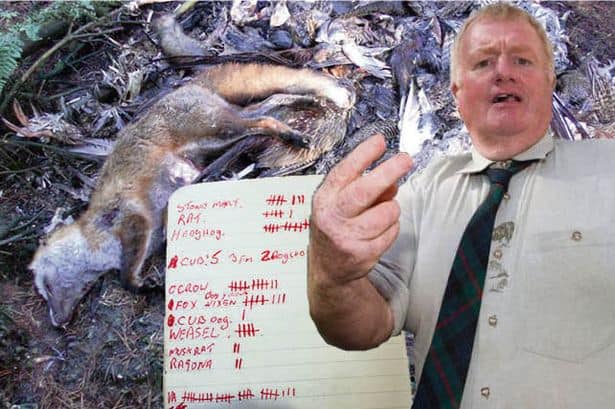 A gamekeeper suspected of running up one of the biggest kill lists of endangered animals in Scottish history has escaped a jail sentence. Alan Wilson, 61, was convicted of illegally killing dozens of animals on Longformacus Estate near Duns in the Scottish Borders.

But investigators believe animals including goshawks, badgers, buzzards and an otter represented only the tip of the iceberg and that Wilson slaughtered thousands more.

One source claimed he was hell-bent on killing “everything that moved” except game birds on the estate that were being bred to be shot by wealthy clients.

Most of the dead animals went into an horrific “stink pit” designed to attract birds of prey and other animals, which Wilson is suspected of shooting.

Despite his trigger happy crimes, Wilson was sentenced to just 225 hours of unpaid work at Jedburgh Sheriff Court after being convicted of nine offences.

He was caught with 23 illegal snares and gin traps that were used between March 2016 and May 2017, despite Wilson knowing these could lead to agonising deaths for victims. He was also found to be in possession of banned pesticide carbofuran, which is hugely poisonous to animals and humans alike.

When passing sentence Sheriff Peter Paterson said this was “a very severe case” but he had no option within the confines of the law to hand down a custodial sentence due to guidance on short term sentencing.

Charges were brought against burly Wilson, nicknamed Ginger, after a League Against Cruel Sports Investigations and Field Research Officer found traps which he suspected were being used to target birds of prey, as well as a dead Goshawk near the gamekeeper’s property.

The League contacted the Scottish SPCA, who searched the property and subsequently informed Police Scotland.

The undercover LACS investigator said: “This gamekeeper has been dealt with for killing several animals but we believe it represents the tip of the iceberg.

“The more likely reality is that he killed everything that moved on the estate with no regard to the law. He was sloppy in the days leading up to him being caught and he left vital evidence around the estate and in his home but he will have been very aware of how to cover his tracks on the past.”

David Anderson, conservation manager for the Forestry Commission Scotland, earlier write a report that stated: “In 40 years working in wildlife management I have never seen so many protected species dead in such a small area.”

Robbie Marsland, Director of the League Against Cruel Sports, Scotland said: “This is an appalling case, involving the systematic illegal slaughter of wildlife so that more grouse can be shot for entertainment, and in our view is one of the worst wildlife crime incidents in recent years.

“While we are pleased Alan Wilson has been brought to justice for his crimes we are disappointed the law didn’t allow for a custodial sentence. This case illustrates the scale on which wildlife is being persecuted in order to prop up the commercial shooting industry which relies on eradicating any species deemed to be a threat to game birds.

“This is why the League is proud to be a partner of the Revive Coalition, seeking radical reform of Scotland’s grouse moors to put an end to this type of sickening behaviour.

“We can’t praise the Scottish SPCA highly enough for their role in bringing Mr Wilson to justice. This has been an excellent example of partnership working resulting in the conviction of a serial wildlife criminal operating in an area which is notoriously difficult to prosecute.”

A senior undercover Scottish SPCA SIU investigator added: “The Sheriff alluded to the fact he was restricted in the sentence that could be served in this case due to regulations surrounding wildlife crime. Whilst we welcome the sentence, we hope this case highlights the need for increased sentencing for crimes of this nature in the future.

“This is a despicable case of serious and systematic crimes to indiscriminately remove wildlife from an estate. The sheer volume of dead wildlife discovered is truly shocking.

“Some of the equipment in Mr Wilson’s possession has been unlawful for decades yet it was evident it had been recently used to trap wild animals. The illegally set snares across the estate he was managing would have trapped wild animals indiscriminately and the remains discovered were proof of that.

“This amounted to large-scale eradication of wildlife. We will never know the total number of animals which perished due to Mr Wilson, though had it not been for the robust intervention of Police Scotland, the Scottish SPCA and our other partner agencies, many more would have suffered and perished.”

Last year, Wilson was also fined £400 and banned on from keeping birds of prey for ten years for failing to ensure the welfare of the eagle owl.

After a warrant was obtained to search his home, Henlaw Cottage in Duns, Wilson was found to have trapping tools and equipment including snare tags and gin traps.

Detective Constable Andy Loughlin, who led the police inquiries, said: “This has been a complex inquiry that has amounted to a large scale police investigation spanning the past couple of years.

“We have worked with experts in the field to secure Wilson’s conviction and I would like to thank our colleagues from the Scottish SPCA, RSPB Scotland, veterinary pathologists at the Scottish Agricultural College, government specialists at SASA, and independent experts, for all their assistance.”

Duncan Orr-Ewing from RSPB Scotland said: “This was an absolutely appalling incident involving the illegal killing of a range of protected wildlife. We thank the Police, Scottish SPCA, and other public agencies for their hard work in bringing this case to a successful conclusion.”

Dr Lucy Webster, a wildlife forensic scientist at SASA said: “This investigation has made good use of forensic evidence to fully illustrate the range of offences committed. It is an excellent example of the benefits of partnership working to bring a prolific wildlife criminal to justice.”

A spokesman for The Scottish Gamekeepers Association said Wilson had been booted out, adding: “The actions, in this case, are a gross breach of our organisation’s wildlife crime policy.

“They reflect negatively on the reputation of the entire profession, are unacceptable and entirely out of step with what we expect of our members’ conduct. We will be terminating the individual’s membership of the SGA with immediate effect.”

This article was first published by The Daily Record on 19 August 2019.