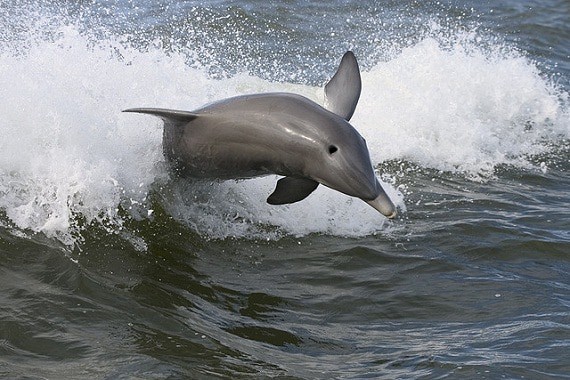 This morning NOAA released a report from its dolphin health assessment following the Deepwater Horizon oil spill. Their investigation shows the effects of the spill on dolphins in Barataria Bay, including a higher prevalence of lung disease and adrenal effects.

One of the worst sights I’ve ever seen was the Gulf Oil Spill, but the thing that brought tears to my eyes was seeing dolphins doing their usual graceful arcing dives into and out of oil slicks. Besides being coated by the oil, they were breathing air at the surface that I knew contained toxic hydrocarbons from the spill since I could smell them myself.

Oil is a mixture that includes many toxic chemicals, and some of them evaporate into the air. Besides breathing those chemicals when they surfaced, the dolphins were likely exposed to the oil in other ways such as when swallowing water, and through their food. We are just now beginning to learn the impacts of the oil on marine life.

While we have seen an unusual number of dolphin deaths during and after the spill, this report verifies that the oil took a larger toll on dolphins. It shows that many of those that survived were made sick by the oil. Illnesses like the ones seen in this report can compromise their ability to survive in the long run, not to mention their ability to reproduce and maintain healthy populations.

Oil production in the Gulf has had a much larger toll on the ecosystem than most people realize. There are many impacts you don’t see, and these sick dolphins are a good example. We wouldn’t even know about these if it weren’t for the dedicated work of NOAA’s damage assessment team. But they can’t test every animal or every part of the Gulf of Mexico. In fact the full damage assessment must be much, much worse.

Instead, the government needs to move away from offshore drilling, especially offshore in the Arctic, where there are even more hazards than in the Gulf, like frequent darkness and floating ice, and much less response capacity even that what we saw in the Gulf. TheObama Administration must begin to transition us off of oil, and onto offshore wind and other clean energy alternatives, so we can make sure the types of injuries to marine life shown in this report never happen again.

This article was written by Jackie Savitz for the Beacon.

When will we get it that Planet Earth is a CLOSED system?!?

Hmm this one on my fb also. My eles are not front now. They will be very soon.:-) night all ya:-) sweet dreams of our beautiful oceans with wonderful creatures. The wilds of our lands with majestic animals. Lovely visions in my mind:-)

Of course they are "STill" sick! Big oil puts on face like they care. Get them out of our oceans or must it be we have dead oceans? It's either or for there is no safety in drilling oil in ocean. I know this as they do to. Greed or our oceans. Simple very simple. Oceans. With out our oceans we are are destroyed. Is this to simplistic for greed. Get out of the oceans!

I've seen where a fleet of solar-panel-powered trucks were sold to one of the Power companies over 4 years ago. Definitely the technology is already here to get off of all oil altogether. We need much more outcry to see than each and every oil well is capped forever. Solar can be harvested for every manner of power uses.

Adding more wind is good, but it doesn't displace oil.
Wind produces electricity, and we don't produce even 1% of our electricity from oil, mostly in Hawaii