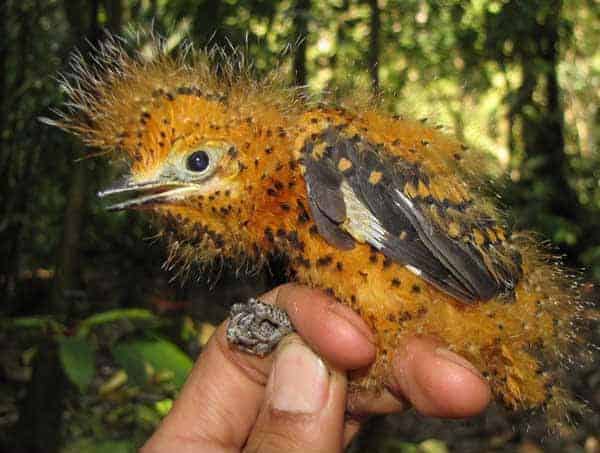 “Mama, I wanna be a toxic caterpillar,” says the little bird. “Okay,” mamma answers, “but first you gotta study your Batesian mimicry.”

Meet the cinereous mourner (Laniocera hypopyrra), an ash-colored, Amazonian bird that looks rather hum-drum compared to many other birds found in the region (hence it’s name ‘cinereous’ which comes from the Latin meaning cinder or ashen).

Yet, scientists have discovered something special about the cinereous mourner: its newborn babies, or nestlings, look and move like a neon orange, toxic caterpillar.

“To our knowledge, this is the first bird species for which Batesian mimicry has been proposed for nestlings,” the researchers write in a paper in The American Naturalist.

First described by (and named after) British naturalist, Henry Walter Bates, Batesian mimicry refers to the evolutionary tactic whereby a harmless species mimics a dangerous one to keep predators at bay. Bates described this evolutionary strategy related to insects in the Amazon, while traveling with the more well-known scientist, Alfred Russell Wallace, in the 19th Century.

But it’s rare in birds and totally unheard of, until now, in baby birds. Yet in the case of the cinereous mourner, researchers in Peru’s Madre de Dios region found a baby bird sporting bright orange feathers tipped out in white. They also recorded that the baby moved its head in a way that resembled a caterpillar. Out of the hundred-plus bird species they recorded in the area, none of the nestlings looked anything like this.

Soon, the scientists stumbled on a caterpillar that also bristled with orange, white-tipped barbs. It belonged to the Megalopygidae family of moths or flannel moths—although it had not been identified down to the species level—and caterpillars in this family are known for their toxic stings, which in very rare cases can be fatal to people. The resemblance between the poisonous caterpillar and the baby bird was uncanny.

The scientists believe the cinereous mourner mimics the caterpillar in order to avoid being eaten during the first days of its life. They write that these baby birds are “particularly vulnerable as they have little ability to move, their eyes are closed, and their tarsi [a bone in the foot] and wings are not well developed. Thus, they cannot escape when a predator approaches.”

Cinereous mourner babies spend about 20 days in the nest, a long time for a bird. For the first 16 days, researchers found, the bird maintained its caterpillar-like plumage and continued to playact the caterpillar. After the 16-day period, though, its color and behavior changed. As it reached the fledgling stage—i.e. capable of flight and therefore to escape if need be—it dropped the disguise.

The bird became a bird again, and the killer caterpillar morphed into a furry moth.

This article was first published by Mongabay.com on 23 Mar 2015.
Subscribe to our FREE Newsletter