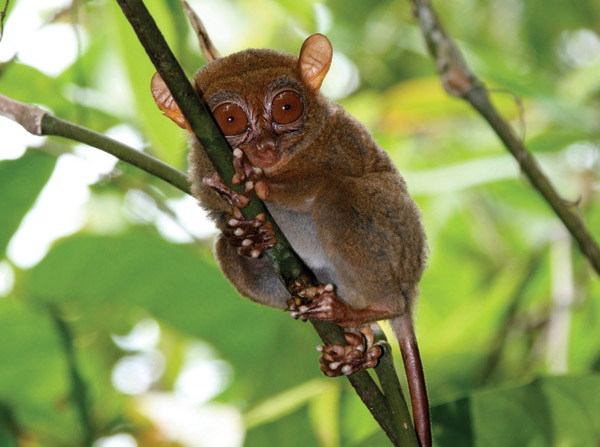 Despite some media reports, scientists have not yet discovered a new species of big-eyed, nocturnal primate – known as tarsiers – in the Philippines. Instead what they have discovered is an intriguing population that is genetically-distinct even from nearby relatives, according to a new open-access paper in PLOS ONE.

“There does seem to be a lot of confusion on this point. Our results do not really answer that question [of new species] yet,” lead author, Rafe Brown with the University of Kansas’ Biodiversity Institute, told mongabay.com.

The genetically distinct population lives on Dinagat Island and the very northeastern tip of Mindanao Island in Philippines. It may also be on nearby Siargao Island, but genetic tests of this island’s tarsiers are needed before that can be confirmed. What the new research does is throw out how scientists and conservationists have long-viewed the evolution of Philippine tarsier (Tarsius syrichta).

Looking at mitochondrial and nuclear DNA, Brown’s team uncovered three different evolutionary lineages: one lineage of tarsier makes their home on Bohol, Samar, and Leyte Islands; another has conquered the vast majority of Mindanao; while a long-cryptic branch has evolved in northeastern Mindanao and Dinagat Island. For the purposes of the paper, the scientists refer to this as the Dinagat-Caraga tarsier.

While Rafe says its too early to claim a new species of primate yet, he says it’s a real possibility with more research.

“My suspicion is that three species will eventually be recognized in the Philippines…but I am not a primate taxonomist, so I can not really say for sure,” he told mongabay.com, adding, “there are some subtle but consistent characteristics differences between the Dinagat tarsier and the other populations from surrounding islands, and there are other large mammals that only occur on Dinagat and Siargao (the neighboring island) so it would not surprise me at all if the tarsier there eventually were determined to be endemic, distinct species.”

But why does this matter?

“Basically, we can not legally protect something if we do not know that it exists,” said Brown, who notes that this distinct population is need of some emergency conservation measures given lack of protected areas, forest loss, and mining.