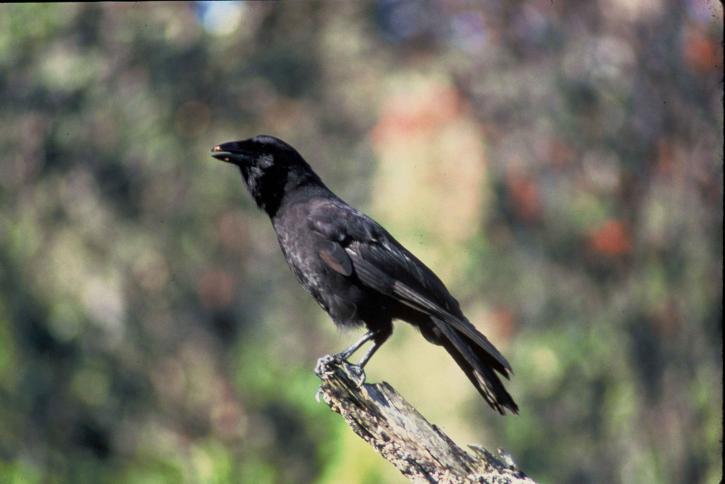 There are only a handful of bird species known to use tools for foraging in the wild, and now the ‘Alalā, or Hawaiian crow, can be counted as one of them. According to a study published in the journal Nature this week, the New Caledonian crow (Corvus moneduloides), which inhabits only the main island of the New Caledonia archipelago as well as one of the Loyalty Islands in the South Pacific, stands out in terms of its sophisticated tool-making abilities.

New Caledonian crows have been observed using tools with incredible proficiency in order to get at insects and other prey inside deadwood and vegetation, but scientists have never understood why they have evolved such skills when no other members of the crow family (known as corvids) have done so. Without other tool-using corvids for comparison, scientists have been unable to study the behavior in more depth. The New Caledonian crow and its skilled use of tools remained a mystery.

The critically endangered Hawaiian crow (Corvus hawaiiensis) has now been found to be a “highly dexterous tool user,” however, say the authors of the Nature study, an international team of scientists and conservation experts. Though the Hawaiian crow went extinct in the wild in the early 2000s, 131 birds currently survive in two facilities on Hawai‘i Island and Maui, which allowed the researchers to discover at least two lines of evidence that suggest tool use is part of its natural behavioral repertoire: “juveniles develop functional tool use without training, or social input from adults; and proficient tool use is a species-wide capacity,” they write in the study.

There are over 40 species of crows and ravens in the world. Most, especially those that live in remote tropical regions, are poorly studied. That led Christian Rutz of the University of St. Andrews in the UK to wonder whether or not there might be some undiscovered tool-using crows out there.

“We had previously noticed that New Caledonian crows have unusually straight bills, and wondered whether this may be an adaptation for holding tools, similar to humans’ opposable thumb,” Rutz said in a statement. By searching for this characteristic in other, lesser-known corvid species, Rutz soon found a promising candidate: the ‘Alalā.

Hawaiian crows and New Caledonian crows evolved in distant but similar environments on remote tropical islands. The two species are not closely related, Rutz and team write in the study, suggesting that their tool-using abilities arose independently, which “supports the idea that avian foraging tool use is facilitated by ecological conditions typical of islands, such as reduced competition for embedded prey and low predation risk,” they write.

The ‘Alalā population crashed in the late 20th century, but the remaining wild birds were taken into captivity in an effort to preserve the species by launching a breeding program. “Later this year, in collaboration with our partners, we will be releasing captive-reared ‘Alalā on Hawai‘i Island, to re-establish a wild population,” Bryce Masuda, the co-lead author of the study and Conservation Program Manager of San Diego Zoo Global’s Hawai‘i Endangered Bird Conservation Program, said in a statement.

Masuda and his team had already seen the birds using stick as tools at their two breeding facilities, but hadn’t thought much of the behavior prior to being contacted by Rutz and the St. Andrews researchers. The two teams quickly formed a partnership to study the Hawaiian crow’s tool use under controlled conditions.

“We tested 104 of the 109 ‘Alalā alive at the time, and found that the vast majority of them spontaneously used tools,” Masuda said.

The results provided strong evidence that tool use is part of the Hawaiian crow’s natural behavior rather than an adaptation to life in captivity, according to Rutz: “Using tools comes naturally to ‘Alalā. These birds had no specific training prior to our study, yet most of them were incredibly skilled at handling stick tools, and even swiftly extracted bait from demanding tasks. In many regards, the ‘Alalā is very similar to the New Caledonian crow, which my team has been studying for over 10 years.”

The discovery of a second tool-using crow species could finally allow scientists to address long-standing questions about how tool-using behavior evolved in the animal kingdom. “As crow species go, the ‘Alalā and the New Caledonian crow are only very distantly related. With their last common ancestor living around 11 million years ago, it seems safe to assume that their tool-using skills arose independently,” Rutz said. “It is striking that both species evolved on remote tropical islands in the Pacific Ocean that lack woodpeckers and ferocious bird predators — perfect conditions, apparently, for smart crows to become accomplished tool users!”

World-renowned primatologist Jane Goodall first reported tool use in wild chimpanzees in 1964 — a discovery she published in the journal Nature, refuting the long-held assumption that humans were the only species capable of using tools.

Goodall said she is excited to find out that ‘Alalā are also skilled tool users, too. “I love learning about the discovery of tool use behaviours in other species of animals,” she said in a statement. “This latest finding is especially wonderful. With two tool-using corvids, the well known Galapagos finches, and one vulture in the list of tool using birds, we can now make comparisons with avian and primate tool using. Each of these discoveries shows how much there is still to learn about animal behaviour, and it makes me re-think about the evolution of tool use in our own earliest ancestors.”

Though its existence has now been definitely proven, tool use is still an extremely rare talent in animals. Recent estimates hold that the behavior has been documented in less than one percent of all known genera, and in an even smaller percentage of species, the authors of the Nature study note. That’s what makes the discovery of a second tool-using corvid such an important find.

“Our discovery creates exciting opportunities for comparative research on multiple tool-using and non-tool-using corvid species,” the researchers write in the study. “Such work will in turn pave the way for replicated cross-taxonomic comparisons with the primate lineage, enabling valuable insights into the evolutionary origins of tool-using behaviour.”

This article was first published by Mongabay.com on 16 Sep 2016.