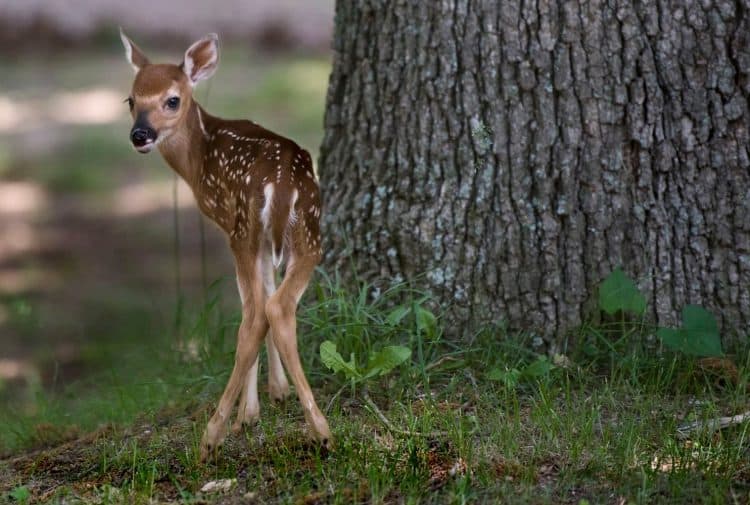 He said it was a “big game kill,” something usually associated with the controversial, sometimes illegal sport of hunting large wildlife in Africa — lions, elephants, leopards and rhinoceroses.

But the photos Michael Garcia posted to Instagram were decidedly not big game. They were of a baby deer, a fawn that Garcia had just allowed his dog to kill near the Conejos River in southern Colorado, which flows into the Rio Grande.

Based on its size and markings, the fawn was no more than a month or two old, not old enough to be foraging on its own. But after the kill, Garcia, 36, skinned the baby deer and displayed the hide and bones for a photo, which he also posted on Instagram.

It was that photo, and its caption praising the kill, that provoked the strongest reaction on social media.

“A fawn being a big game — that’s not big game. That’s pathetic,” Clint Lockhart, a Colorado native who grew up hunting and fishing, told Fox News affiliate KDVR. “The worst thing about it is that he dresses this fawn . . . skins it and lays it out afterwards. He bragged about it.”

Colorado Parks and Wildlife charged Garcia on July 23 with allowing his dog to harass wildlife, the illegal taking of wildlife and illegal possession of wildlife — all misdemeanors, according to Rick Basagoitia, the region’s wildlife manager at CPW. Basagoitia said it’s not difficult to violate a wildlife law; the department’s binder of rules and regulations is two and a half inches thick.

“There’s a lot to know, and it’s that person’s responsibility to know” the law, Basagoitia said, which is sometimes why evidence of violations end up on social media — people don’t know that what they’re sharing is illegal in the first place.

In Garcia’s case, Basagoitia called the incident “disturbing.” The wildlife manager said his department launched an investigation into the post after hearing from “many members of the public.” CPW officials later found Garcia as he was working as a fishing guide on the Conejos River and issued him the citation.

Garcia was employed as a hunting guide at Conejos River Anglers, KDVR reported, but is no longer listed on its website. The punishment for the charges includes a $1,372 fine and 20 license-suspension points, according to CPW. Garcia may elect to pay the fines or appear in court on Sept. 16 — but either way, he’ll also be required to meet with a CPW suspension-hearing officer, which could mean his license will be suspended for up to five years.

Garcia wrote a remorseful Facebook post on July 22 that has since been taken down. In an image of the statement captured by KDVR, Garcia said he was sorry for the photos and video and described the incident as a “freak accident,” adding, “I truly am a lover of the outdoors. ”

“I worked very hard my entire life, to figure all this out, and it would suck to lose everything, because of a poor decision on my part!” Garcia wrote. “People make mistakes, and I’d appreciate the spotlight back on the positive side of hunting and fishing, instead of personally crucifying me, and everyone close to me. ”

He did not return a message from The Washington Post requesting comment Monday afternoon. In his now-deleted apology post, Garcia claimed he was “trying to get the fawn away from [the dog], while fighting off the mother doe, it was a freak accident, not premeditated. ”

“I messed up, hopefully the social media world will have some understanding,” he added.

But as of Monday evening, the comments were still flowing onto Garcia’s Facebook page, and they were less than forgiving. Many of them disappeared soon after they were published.

“You actually allowed your dog to rip apart a fawn and videoed the killing,” one woman wrote. “You’re a sick person. I’m glad someone reported you. ”

This article was first published by The Washington Post on 29 July 2019.