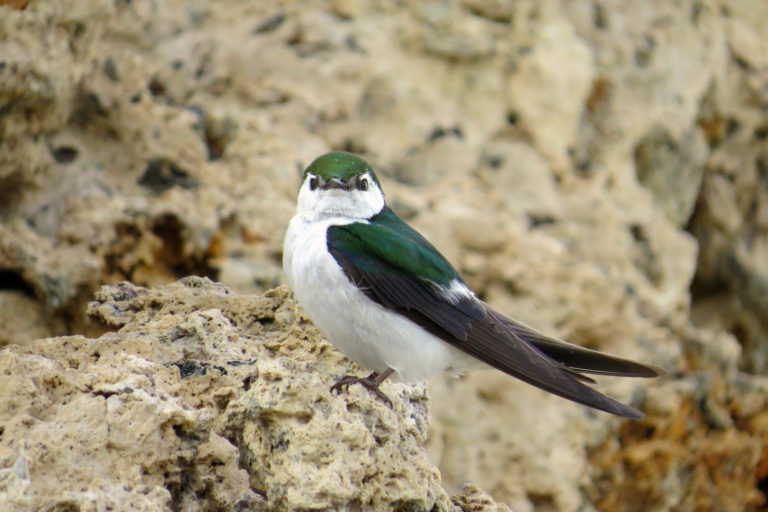 As the Mojave Desert in California and Nevada becomes hotter and drier, birds need more water to stay cool. Species that can’t get enough water are rapidly declining in this iconic desert ecosystem, ecologists reported recently in the Proceedings of the National Academy of Sciences.

Some birds may die solely from overheating, but a more serious problem facing most species is how much time they must spend trying to cool down. This decreases their time spent breeding, leading to smaller population sizes.

The study focuses on sites in the Mojave that were surveyed a century ago by UC Berkeley biologist Joseph Grinnell. This arid ecosystem, which includes Death Valley National Park, is rich with wildlife, including bighorn sheep, desert tortoises, and burrowing owls.

Temperatures there have risen about 2 degrees Celsius (3.6 degrees Fahrenheit) since Grinnell’s original fieldwork, data suggests. The team’s “resurveys” show these sites have lost an average of 43 percent of their breeding bird species. The hottest, driest sites have sustained the biggest declines.

To understand how climbing temperatures affect birds, Riddell and his colleagues created simulations of 50 different species. These “virtual birds” included each species’ size, feather color and shape, and shade-seeking behavior. The species that have declined the most matched the ones the simulation indicated would require the most extra water to stay cool on the hottest days.

Birds cool themselves by panting or vibrating their throat muscles. Both of these actions consume water. Past research has suggested that the species most vulnerable to heat stress are smaller birds, which lose water more quickly than larger species — just as an ice cube melts faster than a large block. However, this study indicated the opposite: larger birds saw greater reduction in ranges.

“The surprising conclusion is that it’s not only size, but also diet” that impacts the ability of birds to cool themselves, said Donald Miles, a vertebrate biologist at Ohio University in Athens, Ohio.

Birds that eat grains or plants, such as mountain chickadees, drink water directly from pools and streams. If they overheat, they can easily drink more water to compensate. However, larger meat-eating birds like prairie falcons get all their water from the insects and animals they eat. When temperatures rise, they can’t easily increase their water consumption. Climate change has made these daily challenges steeper — and deadlier, the study shows.

Although other studies have documented species declines, prior to this new paper “there really wasn’t a mechanism to explain why a bird would succumb to climate change,” said Miles, who was not involved with the research.

“This is one of the first studies that directly ties the increase in physiological demands from a warmer and drier climate to the changes that are taking place in biodiversity,” said vertebrate biologist Steven Beissinger of UC Berkeley, co-author of the paper and leader of theGrinnell Resurvey Project.

The results demonstrate that even on protected lands with little human development, animals can’t escape the effects of climate change. The researchers estimate that in the future, Mojave birds will need about 50 percent to 78 percent more water. But many of the desert’s surface sources of water are vulnerable to drying as well, they note.

Because rising temperatures are the biggest threat, “reducing the release of carbon is the main avenue in stopping this catastrophe,” says Miles.

But Sinervo is more direct. “We’re screwed,” he said. “If we don’t change, all of biodiversity begins to vanish.”

This article by Jesse Kathan was first published on Mongabay.com on 29 November 2019.

Jesse Kathan (@jessekathan) is a graduate student in the Science Communication Program at the University of California, Santa Cruz. They have previously written for the Monterey County Weekly. Other Mongabay stories produced by UCSC students can be found here http://news.mongabay.com/list/ucsc/.