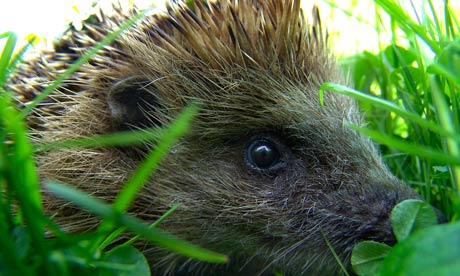 Hedgehogs are disappearing as fast as the tiger. And if the latter was roaming our countryside it might have more of a fighting chance: I wouldn’t find two dead tigers squashed on the road within a mile of each other like the little prickly carcasses I saw last weekend.

Tigers are also getting plenty of international help – charismatic “megafauna” always does – but for all the “ahhs” induced by Mrs Tiggy-Winkle, the hedgehog was not even counted scientifically in Britain until recently.

A new State of Nature report by 25 conservation groups including the Wildlife Trusts, the RSPB and the Mammal Society is predictably depressing: most British species are struggling and one in three have halved in number in the past half century. Hedgehogs have disappeared even more dramatically. Even if the 30 million population estimate from the 1950s is a massive over-exaggeration, hedgehogs have declined by more than 90%. Numbers have fallen by more than a third since 2003 and fewer than a million roam our countryside today.

The quiet disappearance of this much-loved mammal – currently performing strongly in a BBC Wildlife Magazine poll to find a national species for Britain – may rarely make the headlines but it is a tragedy, and another small way in which we are all becoming more estranged from the natural world.

Hugh Warwick, ecologist and author of A Prickly Affair, puts it brilliantly. Exotic endangered animals like tigers and pandas are the Hollywood celebrities of our day. “All the big conservation groups rely on charismatic megafauna to sell a love of the natural world, which is a bit like reading Heat magazine to learn about love,” he says. “Hedgehogs are the animal equivalent of the girl next door – the hedgehog allows us to have a connection with something truly wild in a suburban context.”

You don’t need to take your children on safari to see a hedgehog. And unlike elusive native mammals such as otters or badgers, you can also get really close to a hedgehog because they don’t run away. But despite this accessibility, as Warwick points out, when you look into a hedgehog’s beady eye you realise you are communing with a truly wild animal.

Despair and helplessness come too quickly when faced with the inexorable decline of our wildlife. It seems as easy to dismantle capitalism as it is to put the larks back into the sky. But we can’t simply blame climate change and industrial agriculture for the loss of hedgehogs. (Nor can we accuse the burgeoning badger population: while scientific studies show hedgehogs literally run a mile if they sniff out badger poo and a high density of badgers will wipe out local hedgehogs, ecologists believe this only happens when food is scarce. In a healthy ecosystem, both species coexist quite happily, as they have in Britain for millennia.)

A major cause of recent hedgehog declines is us, or at least anyone with a garden. We are to blame and we can do something about it.

Hedgehogs were once a wood-edge species and suffered when country hedges were ripped out. Suburban gardens were a perfect substitute, until we started paving them, decking them and building on them.

As well as smashing up our patios, resisting the urge to poison slugs with toxic pellets and allowing for grass and wild corners where hedgehogs can find invertebrate prey and shelter, the best thing we can do is punch some holes in our fences. A hedgehog may roam an area the size of an 18-hole golf course in one night in search of food; modern, well-fenced or walled gardens prevent this. They only need five-inch square holes – hedgehog gates, if you like – to pass through.

As the British Hedgehog Preservation Society’s campaign, Hedgehog Street, urges, we need to act together: your garden may be a perfect hedgehog sanctuary but it’s useless if your neighbour’s isn’t. Hedgehog Street already has 26,000 hedgehog champions. It could do with some more.

This article was written by Patrick Barkham for the Guardian UK.