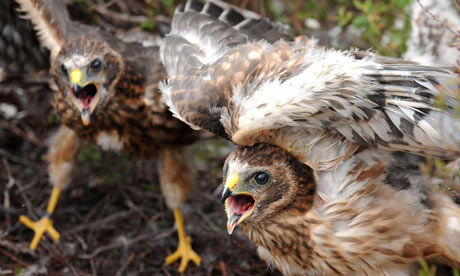 The “Glorious 12th” – 12 August, when the annual grouse-shooting season starts – will be marked on Monday with an acrimonious row between conservationists and the body that represents English and Welsh grouse moorland owners. According to the RSPB, the last two breeding pairs of hen harriers in England failed this year to produce eggs for the first time in 60 years and are now on the point of extinction because gamekeepers working for rogue moorland estate owners have systematically persecuted the bird to protect baby grouse which live on the moors.

“No new hen harriers this season means that the hen harrier is on the brink of extinction in England,” said RSPB spokesman Graham Madge. “Our belief is that on some estates there is a systematic approach to the removal of birds of prey. We are not asking that these people do anything more than respect the law. The loss is almost entirely due to the illegal persecution. It has to be by rogue grouse moor estates.”

The hen harrier, a large bird of prey which eats small birds and mammals and isknown for its breathtaking aerobatics, was once common in England, but since the 1990s numbers have fallen dramatically.

“Just two pairs attempted to nest this year in England, but both failed,” the RSPB said in a statement. “At one of these sites the RSPB was working with the landowner to ensure the nest was protected. Sadly, the eggs never hatched.

“While conservationists believe that this nest failed naturally, the government’s own wildlife advisers say that the population had been forced into this precarious position by illegal killing. The reason for the failure of the second nest isn’t yet known.”

Robert Benson, chairman of the Moorland Association, blamed the long cold winter for the birds’ inability to breed this year. “Despite record numbers of hen harrier seen at winter roost sites around the country, very few mature birds have been seen during the breeding season,” he said. “A very late and cold winter will have affected breeding patterns.

“There have been two hen harrier nesting attempts on or adjacent to grouse moors this spring but, disappointingly, neither have resulted in chicks hatching.

“One pair built a nest in County Durham and laid eggs but the male deserted, forcing the female to abandon the nest to feed.

“In the second attempt, an immature female, which nested 5 metres [16ft] from the boundary of the moor, laid two eggs in Northumberland but the eggs were not viable despite the female incubating for the full term and the male provisioning her well. The local grouse moor keeper was briefed, licensed and ready to diversionary-feed [pdf]the adults to protect a very low grouse population on the neighbouring estate.”

The RSPB argues that English moorlands could support more than 300 pairs of hen harrier.

“A government study cited illegal persecution through shooting, trapping and disturbance as the main reason for the hen harrier’s unfavourable conservation status in England,” said Madge.

In 2007 there were 15 breeding pairs in England. That year two hen harriers were shot over the Queen’s estate at Sandringham, Norfolk, while Prince Harry, his friend William van Cutsem and a gamekeeper were out duck shooting. All three were questioned by police but released without charge after they denied any knowledge of the incident.

This article was written by John Vidal for the Guardian UK.