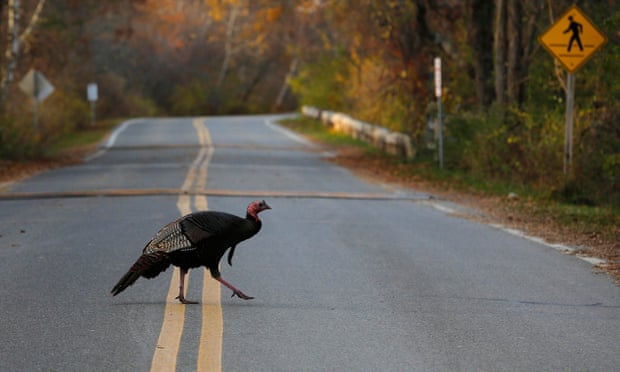 At the beginning, the turkey was a mere curiosity. It had arrived in the town of Johnston, Rhode Island, in May, along with two other birds, and taken up residence outside town hall.

Wild turkeys aren’t uncommon in this part of the world, but people thought it unusual when the birds were still hanging around days later. Locals quickly warmed to the new neighbors. People took photos, and someone even set up a Facebook page. It was all good fun.

Until the turkeys began meddling in the town’s administrative affairs.

“They were starting to interfere with the people coming in to pay their taxes and do their business,” said Joseph Polisena, Johnston’s mayor. “They were scaring people away.”

Polisena summoned animal control officers and two of the birds were captured. But the third escaped, and six months later is still wreaking havoc on Johnston.

Through summer and now approaching winter, the turkey has brought traffic to a standstill with its brazen jaunts across the local highway. It has pinned people inside their vehicles with bouts of vicious pecking and repeatedly outwitted local officials.

A look through the local newspapers shows the impact the turkey has had on life in this once quiet town.

“Johnston’s troublesome turkey traps town worker in her car, makes another getaway,” read a Providence Journal headline in August. Later that month the newspaper recorded the bird chasing a fireman. In October the Johnston Sun Rise reported the bird had “made a clean getaway” from an “early morning sting” conducted by town officials.

The turkey’s exploits have won it a cult following in Rhode Island. Locals post updates on Instagram and videos on YouTube. In the November elections 69 people wrote in the turkey for mayor. Polisena, who managed to hold off the turkey’s challenge, admits a grudging respect for the bird.

“This guy, he’s like Al Capone and John Dillinger. He keeps getting away,” Polisena said. “He’s smarter than the other two.”

The turkey has learned to recognise animal control officers’ vehicle and runs away when it approaches. It has led to officers using an “undercover vehicle”, the mayor said.

In a desperate effort to capture the bird, Polisena approved the purchase of a device which fires a net. Officials crept up on the turkey in their unmarked vehicle, only for the device to malfunction. Once again, the turkey got away.

As well as possessing quick wits, the bird has a surprising turn of speed. “He’s unbelievably fast,” Polisena said.

The turkey can also fly, which animal control officers are unable to do, and has taken to sleeping on a telephone pole or in a tree, further complicating attempts at capture.

Polisena believes the turkey has stuck around, in part, because people keep feeding it muffins from Starbucks and french fries from Smashburger. The bird has definitely drawn media attention to Johnston, but the mayor points out it is causing real problems. For one thing, it has a temper.

If it sees its reflection in a car door or window, it will essentially attack the car. For another, it keeps stopping traffic and Polisena is concerned there could be an accident.

“Quite frankly I don’t want to see the thing splattered all over the road,” Polisena said, “then have some child see it.”

But even if the bird is captured, it will live long in the memory in Johnston. And its remarkable bid for freedom may even have saved the life of at least one of its brethren.

“I’ll be having lasagna for Thanksgiving,” Polisena said. “I already told my wife don’t make turkey because I’ll have flashbacks and nightmares of trying to capture this guy.”

This article was first published by The Guardian on 22 Nov 2018.

Let’s hope he remains safe. There’s a lot of intollerant people out there.