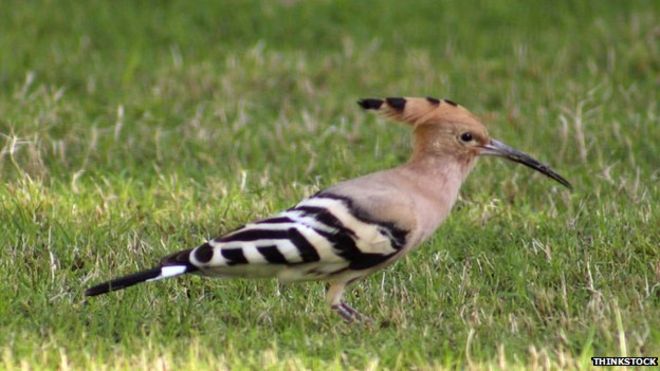 An exotic-looking bird is thought to have overshot its migration to southern Europe and ended up in the Borders. The hoopoe arrived in Innerleithen on Sunday and was spotted outside a bed and breakfast in the town. Lesley Foster, the guest house owner, was only able to identify it thanks to bird-watchers staying with her.

Mike Fraser, of the Royal Society for the Protection of Birds, said: “We do get one every three or four years but usually along the coast.

“It is an over-shooting migrant and probably thinks Innerleithen is the south of France, with the recent warm weather we have had.

“It is great to see a bird like this in the Borders – it is difficult to say how long it will stay.”

Ms Forster said she was delighted by the unusual visitor.

She said: “My neighbour mentioned that a strange looking bird was hanging around our garden but I was so busy I had never noticed it.

“The two chaps who were staying with us came down on Tuesday morning and asked if we knew there was a hoopoe in the garden.

“They were pretty excited about it and now that we have seen it so are we.”

She said the bird had a “fantastic long beak” and spent all day “pecking away” at her lawn.

“When I go out to take a photo it flies up into the plum tree and comes back down when I go inside,” she added.

Hoopoes spend the winter in Africa before returning to southern parts of Europe for the summer.

A small number “overshoot” their route and end up along the English south coast but they are rarely seen as far north as Scotland.

This article was first published by BBC News South Scotland.