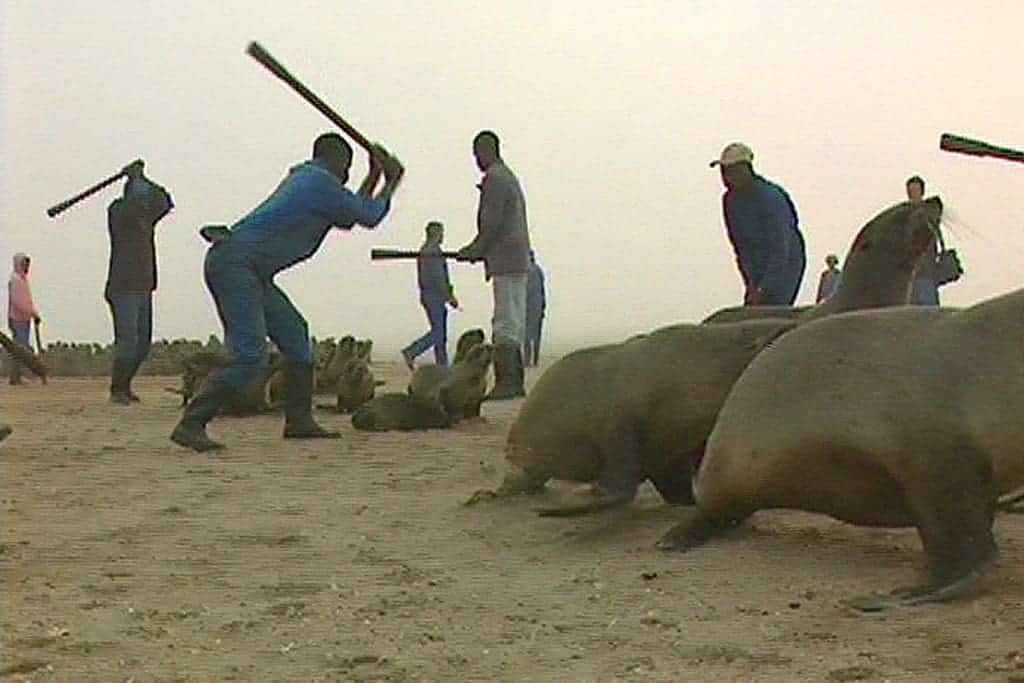 The footage shows dozens of seal pups being driven across the beach to be clubbed to death by a team wielding what appear to be pick axe handles before their carcasses are loaded into a pick-up truck for disposal.

In July each year, a total allowable catch (TAC) of between 80-90,000 seal pups, is declared by the Ministry of Fisheries and Marine Resources (MFMR) in Namibia in a clubbing season that last until November. In addition, between 5,000 to 6,000 bulls are allowed to be shot.

Cape Fur Seals are only found in two places on earth – Namibia and South Africa – and are listed on Appendix 11 of the Convention on International Trade in Endangered Species (CITES).

The MFMR maintains that the cull is necessary to protect their fisheries and that it provides employment and income for Namibia.

Pete Bethune, founder of Earthrace Conservation which obtained the footage, disagrees, saying,
“When South Africa stopped hunting seals, there were concerns there would be an explosion in the seal population. There wasn’t, and their fisheries didn’t collapse. Instead, in the years since, there have been several devastating natural mass die-offs – the last only in 2006 – amongst the Cape Fur seal populations, resulting in the deaths of 95% of seal pups and half the adult seal population.

Bethune continues, “The reality is that seals are a necessary species in the ecosystem and by removing a predator that has a vital role to play in their own fisheries, the Namibians are showing yet another example of bad fisheries management. The last thing this species of seal or indeed the Namibian fisheries needs is for another 90,000 pups or 5,000 adult bulls to be clubbed this year”.

The Namibian Department of Tourism has stated that “the Cape Cross Seal Reserve was established to protect the largest breeding colony of Cape fur seals in the world”. Yet, as well as Atlas Bay, seals are killed at Cape Cross, a hugely popular destination for travellers coming specifically to see the seal colony. Seal clubbing takes place very early in the morning in this area, with clean-up crews arriving after the killing to remove all evidence before the area is opened up again to paying tourists.

Economically, the seal ‘harvest’ employs less than 100 people for six months of the year and generates an estimated USD $500,000. In comparison, direct expenditure on seal watching from tourists visiting Cape Cross is estimated to be over USD $2 million. In addition, seal-watching provides much more stable employment for a much great number of Namibians than the seal hunt.1

There are currently six licensees allowed to harvest seals. This number was doubled in 2012, despite protestations from the three original license holders that an increase would be unsustainable.

Earthrace Conservation has held the shocking footage back for a period of time since filming because the footage was shown confidentially to the authorities in Namibia first to give the Government a chance to introduce a ban on any further seal clubbing.

In addition, enough time has now passed to limit the risk to the people who filmed it. To have been discovered documenting the cull at that time and in that location could have had serious consequences for the team and for those that helped them in Namibia.

Bethune concludes, “Only two countries in the world persist with this barbaric practice – Canada and Namibia, and the hunt in Namibia is the biggest in the world. It makes no economic sense to continue with it in the face of International condemnation now that it is has been proved beyond doubt in South Africa that stopping seal hunting has no detrimental effect on fisheries, and that most of the world, including the whole of the EU, has banned the trade in seal products.

“It makes no ecological sense as Cape Fur seals are already under threat from further mass die-offs, continual deaths from entanglement in fishing gear, illegal shooting by fisherman, and bad fisheries management leading to scarcity of food.

“It’s time for the Namibian Government to wake up and start using Cape Fur seals as the precious eco-system and eco-tourism resource that they are, instead of shedding their blood on the sand.”

“Until they stop this brutality, we urge people to boycott Namibia as a holiday destination.”

This article was written and published by Earthrace Conservation.

Had I known of this, we would never have gone to Nambiia five years ago – fabulous place, but this sickens me to the core and MUST BE STOPPED……how utterly awful is this and had no idea this went on in this country. Bad enough in Canada, but seriously? Namibia, you have such an excellent record of land and animal conservation – why are you allowing such atrocities to occur? I think it high time everyone stopped going to any African country that allows hunting of any kind – tourism is their biggest income and outweighs the killer hunters who… Read more »

A terrible murder of innocent species, like all things in this time economic justification…..

A terrible murder of innocent species, like all things in this time economic justification….

A terrible murder of innocent species, like all things in this time economic justification…..

A terrible murder of innocent species, like all things in this time economic justification….

The method of hunting is inhuman..

The method of hunting is inhuman..

Not a nice picture of the culling of the seals, why do they do this there are plenty of pretators in the sea.

Not a nice picture of the culling of the seals, why do they do this there are plenty of pretators in the sea.