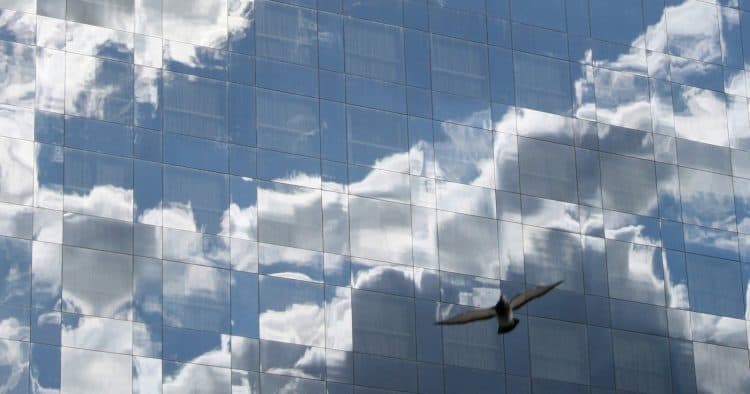 Nothing is more heart-breaking than hearing that familiar dull thud, and running to find a dusty, bird-shaped imprint on your window. Sometimes, the bird is only stunned, and will live to fly another day.

But sometimes, it will not. You may only have encountered this once or twice in your life, but with billions of windows across the world, it all adds up. If you’ve ever seen a dead bird lying on the ground near a bus shelter, tall skyscraper or just a house with windows, this may well have been the reason.

Why do birds fly into windows?

You may wonder how it’s possible that birds cannot see windows, when to us it is obvious there is something in the way. It’s not because they have bad eyesight – quite the opposite. Birds’ eyes are on the sides of their heads, giving them extremely wide-angle vision – sometimes a completely 360 ° view, which is extremely useful in spotting approaching predators, rivals or potential mates. However, this means that a comparatively small area of their vision is covered by both eyes, making it hard to focus on the scene directly in front of them.

Because of this, they may see the view on the opposite side of the window and think they can fly right through. Or, they may see nearby trees reflected in the glass, and mistake it for a completely new area to explore. Another issue is that until relatively recently, birds never needed to be able to see glass. They evolved for millennia in a world without glass, and it’s only in the past few centuries, with the growth of human technology and the expansion of towns and cities, that it has become a problem.

Another, less well-known issue, is unnatural light. This is especially hazardous for birds that migrate at night, and use the light from the moon and stars to help them navigate. These birds may become disorientated by artificial light and lose their way, or fly towards it and collide with the glass. This effect is even worse in poor weather such as fog, when visibility is low.

Studies have shown that migratory bird species are more likely to strike glass than resident ones, even when they are not migrating. This may be because resident birds can learn the location of glass structures and avoid them, whereas to migratory birds, the landscape is less familiar.

What are the most dangerous structures?

The first one is pretty obvious – any buildings with large panes of flat, uninterrupted glass. These act just like a mirror. But another hazard consists of corners where both sides are made of glass, such as balconies or the edges of buildings. To a bird, it looks like they can fly straight through. Bus shelters present a similar problem, and skyscrapers are a particular hazard because their height obstructs the flight paths of many birds. But in general, anything with transparent glass could pose a hazard to birds – including windows on your house.

What can I do to prevent bird collisions?

Fortunately, preventing bird collisions is very simple. All you need to do is put stickers or transfers (“decals”) on the glass to show birds that there is something in the way. These stickers can come in many shapes, styles, colours or sizes, and you can even make your own – just get creative! But as you do, here are some common myths that you should avoid…

Black stickers are the most visible: This is incorrect. Windows often look dark from the outside, so black silhouettes do not create enough contrast. In fact, imprints of bird collisions have often been found right beside black stickers. Instead, go wild with colour – especially red and orange shades, which have been proven to be more effective than blue and green.

The outline of a bird of prey will scare off smaller birds: It sounds like a good idea, but sadly, this is a myth. There has been no evidence that birds are scared away by stickers shaped like birds of prey.

One sticker per window is enough: Not true. Birds are accustomed to flying through very small spaces, such as gaps between branches, so they may still attempt to fly into a window with one sticker. Instead, we recommend that stickers are placed 10 – 15 centimetres apart. Use the “palm area rule”: if the gap is bigger than the palm of an adult’s hand, a bird may still attempt to fly through. That said, any stickers at all are better than none.

Stickers go on the inside of the window: False. If you are able to, stick them on the outside of the glass, where they are far better at breaking up reflections.

Window stickers are ugly: Not at all! There are countless different designs that you can try: schools have even held competitions to create the most beautifully-decorated local bus stop.

Other things you can do

Put in net curtains or venetian blinds – these let light in, but also make your windows visible to birds. Similarly, make sure you close your curtains, blinds or shutters when you go out.

Switch your lights off when you don’t need them – not only is this good for the environment (and your purse), it also prevents nocturnal birds from getting confused and striking the glass. Even skyscrapers have started doing it: the Post Tower in Bonn, Germany switches its lights off every night during migration periods.

If a bird still hits your window and is lying motionless, it may not be dead, but merely stunned. Put it in a darkened box for an hour, and it may calm down and recover enough to fly back out into the world.

As towns and cities expand, glass collisions may seem like a growing problem, but more and more buildings are being designed with bird safety in mind. There are now many offices, galleries, schools and even zoos with coloured, frosted or striped glass, using creativity to make bird safety beautiful. And you can be part of it.

Find out more about Spring Alive activities near you at www.springalive.net

This article was first published by BirdLife International on 11 Mar 2019.