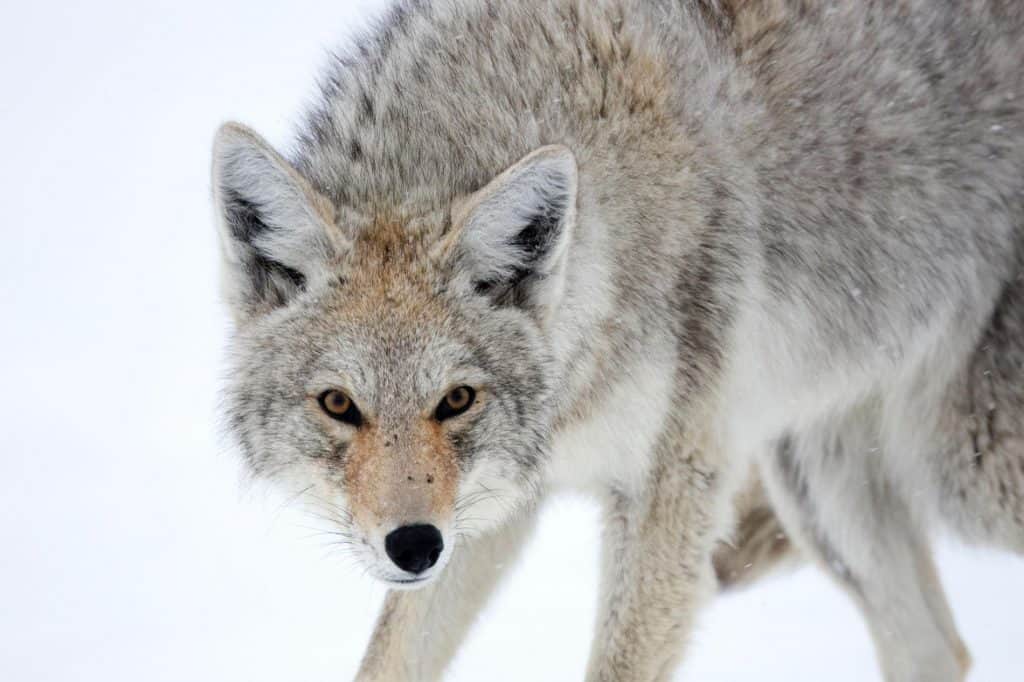 We all know the type—pushy people who elbow their way to the front of the line or cut in on us when we are driving.

And then there are those who have less assertive personalities, and happily defer to others. Animals show similar behavioral variety, according to biologist John Shivik.

In his new book Mousy Cats and Sheepish Coyotes, he explores the science of animal personalities and how it helps balance nature’s necessary tension between individualism and cooperation—and underpins important aspects of evolution.

Speaking from his home in Logan, Utah, Shivik explains why the most macho bluebirdsdon’t always get the girl, how some dolphins showed marked personality changes after the tragedy of Hurricane Katrina, and why he calls coyotes “bipolar.”

The idea that animals have personalities and can feel emotions is a relatively new one. Explain the underlying theory—and why it is changing the way we think about evolution.

That gets to the heart of it! The idea of animal personality is both new and not new at the same time. If you talk to anybody who works around animals, or a pet owner, they’ll go on and on about how they are all individual with individual personalities. In scientific literature, Jane Goodall and others have been thinking this way for quite a few years. A real difference is that, in my training in the last 10-20 years, the idea was to avoid anything that even looked like anthropomorphism. Now we are allowing ourselves as scientists to investigate animal personality.

We’ve just started to ask the questions and do the examination so we’re about to get beyond the “a guppy has a personality, or a water strider or spider or crab or bluebird.” The interesting part is how we push this into the science and study the idea of personality and individualism variation behavior in the context of ecology and evolution. That’s the exciting stuff.

Renee Duckworth’s work on western bluebirds is a wonderful example. She looked at aggressive males and more timid males. You would think the aggressive males would win the battle because they hold territory and exclude all other species as well as individuals of their own species.

The problem is that the more time they spend battling and fighting, the less time they spend provisioning their mates, so they turn out to be less reproductive. So, how can aggressive males stay in the population? As it turns out, that aggressive nature is very useful for invading new territories. It’s a great example of how a behavioral variation drives the ecology of a species.

You worked mostly with coyotes in Yellowstone. What individual personality traits did you observe? You refer to them at one point as “bi-polar.”

[Laughs] This is a good thing to touch on in terms of the management importance of personality. I would capture and radio-collar coyotes and do what we call “collar and foller” type studies, in order to keep coyotes from eating sheep.

Normally, coyotes are very timid and deferential. They roll over and are pretty easy to handle. But one day when I was capturing a particular male, for some reason he wasn’t going to have any of that. He was very different from all the other coyotes that I’d handled. He even managed to get himself out of the shackles, jump up and bite me.

So, with coyotes, there are some that can work around people and live in cities. There are coyotes in Central Park and downtown Chicago. Others do better away from people. Similarly, in the natural environment, some coyotes kill sheep and some don’t. If we can identify the problem type, we can keep particular coyotes from eating sheep rather than saying, we need to kill all coyotes. In other words, can we be more efficient and better in our management?

See Heartwarming Rescue of a Baby Elephant Trapped in a Well

You tell a fascinating story about how a group of dolphins reacted to the tragedy wrought by Hurricane Katrina. Take us inside that research.

Fortunate observation from some unfortunate events! The researchers had trainers rate each of the dolphins according to different personality categories, similar to the Myers-Briggs psychological tests, so that they ended up with a behavioral profile for each animal. Then Katrina blew through and these animals were washed out of their pools into the open ocean, where they didn’t know what to do, having been raised in an oceanarium.

The trainers were able to gather them up again and put them into a new facility. They then did the same evaluation, and there were two things of particular note. First, the animals tended to rate pretty much the same as they were before. So we learned that animals have distinctive personalities, which we can tell apart from one another. But we also learned that, through time, those behaviors are consistent.

One of the dolphins flip-flopped, however. Before Katrina, it was what you could call a happy-go-lucky dolphin. But after the tragic event, it ranked higher on neuroticism and lower on extroversion. My interpretation of that, which is another reason we need to think about animals’ personalities in terms of human personalities, is that here was evidence of PTSD, post-traumatic stress.

All the dolphins went through a traumatic event but one of them ended up quite changed. We see that with human animals, too. So we can learn a lot about humans as we learn more about animals.

In human society, we know there are stay-at-home types and people with more adventurous personalities. But I was surprised to learn that this is mirrored in the animal world. Explain how that works.

Rather than organisms and taxonomy, I break animal behavior up into the general themes. One is the idea of a homebody or an explorer, which we see in human populations. The early exploration of North America involved some people getting into boats and some staying behind to defend the homeland.

An excellent example of this in the animal world is those bluebirds where you’ve got exploring, aggressive males who fly to new places and take over, like an invading army. But they are not a good occupying army. So you end up with different types of individual animals—some that are a great invading army and some that are occupiers, who are better at living with each other and provisioning for their mates.

One of the most famous experiments designed to create a personality type from a wild animal used Russian foxes. Tell us about “Martin.”

This is a famous ongoing experiment your readers may be familiar with. The researchers would walk through a fur farm and those animals that would not shy away, as foxes might typically do around people, were selected to breed, through a number of generations.

In the first generation, only 1 percent or 2 percent of the foxes would be what we’d consider domesticated and tolerant of people. But by 30 generations, half the animals born are tolerant and good with people.

I wouldn’t say they’d make good pets. They’re still foxes. But you could have one as a pet, like Martin, a fox obtained through that program, who lived with a woman in an apartment in Moscow.

You write, “The tension between the individual and the group is the fundamental tension of life.” Unpack that idea for us.

I’m so happy you asked that! Nature demands variation in physiology and behavior. I argue that behavior is a driving force, because we’ve shown how behavior can influence the ecology of a species and its ability to expand its range in order to survive in different circumstances. Without variation, there is no survival as the environment changes. And this means we need to have a lot of individuals.

The other thing nature demands is cooperation. We can see that in everything from the basic eukaryotic cell to human society. We have these two dichotomous issues: the demand to be individual, with this bell curve of personality type ranging from aggressive to timid, and the need to cooperate. If somebody is asocial, as we see in some animals or people, that could be good in some situations. But if you’re too asocial, you can’t cooperate and you’ll be doomed. Nature is an optimization process and we should be cognizant, both among humans and other animals, how to best optimize our level of diversity while also allowing cooperation.

Different human cultures have entirely different attitudes toward the individual or the group—with China, for example, being very much group-driven, while in the U.S. the emphasis is on individualism.

That’s an excellent point. You’ll see these different strategies come up at the individual level but also, what’s the personality of a group? It’s basically a culture, right? You’ll see the different levels happen at a personal, genetic level, but a group of personalities will also form a culture, whether it’s apes or people. What this also hints at is a moral biology where, as a culture or society, we want to have diversity—there’s strength in diversity; it’s not just a feel-good notion. Yet what are the limits to that diversity?

I argue that there’s an analog with behavioral problems and cancer. If one cell is such an individual that all it wants to do is reproduce and take all the resources, ultimately killing every other cell around it and the body it lives in, what’s that analog in people? That’s a psychopath, a cancer on society. But what is psychopathy? What is evil? We can help answer some of those questions with biology.

You end the book with what at first glance seems a very unscientific assertion. To parse the Beatles , is love really all we need?

[Laughs] I came to the conclusion, and we can say that it’s scientific or unscientific. But in order to optimize the tension between being an individual and cooperating, we need to have some—I haven’t figured out the best term for it—lubricant. What I’ve settled upon is the idea of emotion and love and being able to form bonds. By bonding between individuals, we can navigate the idea of being ourselves while allowing others to be themselves.

I can’t give you a definitive answer whether love operates in the animal kingdom. Darwin would say that species with similar brains and neurology are likely to have similar emotions and internal states. I can’t prove it. But I don’t think that it is an outlandish inference to assume that other animals have similar mechanisms to humans for getting along with each other.

This interview with Simon Worrall was first published by National Geographic on 06 Jan 2018.