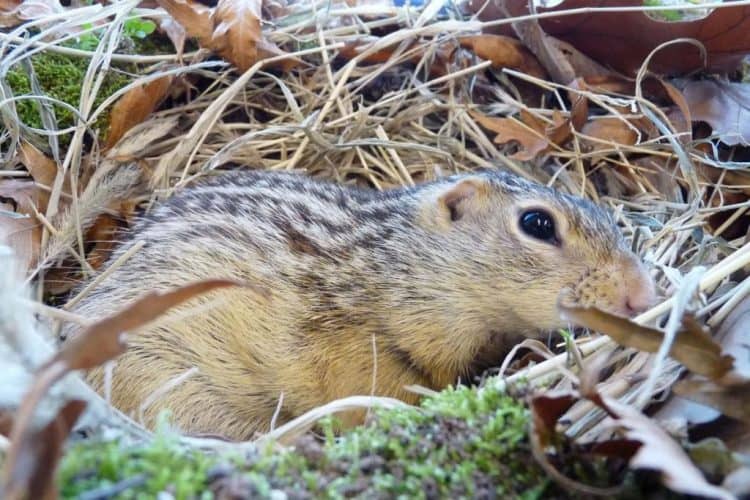 Do hibernating animals get cold?

It might seem like a simple question, but scientists have long wondered exactly how bears, bats, snakes, and many other creatures can wait out the winter without freezing to death.

According to a new study, that may be because hibernating animals don’t feel winter’s chill in the same way that we do.

“If you expose mouse or human neurons to cold, they start to fire … like crazy,” says senior author Elena Gracheva, a neurophysiologist at Yale University School of Medicine.

But when Gracheva and her colleagues exposed hibernators like the 13-lined ground squirrel and the Syrian hamster to low temperatures in the lab, they saw very little activity in their TRPM8 pathway, an area of the central nervous system known to process information about cold.

Of Fire and Ice

In another laboratory experiment, the scientists gave ground squirrels, hamsters, and mice a choice of walking on two platforms—one that was a balmy 86 degrees Fahrenheit and another that varied from 86 degrees down to 32 degrees, the freezing point.

While the hibernating animals showed a preference for the warm platform, they also explored the cold platforms, seemingly unaffected by the changes in temperature.

But the mice reacted much differently to the cold platform.

“They touch it with one paw and say, ‘Uh-uh, I don’t want to go there. This is too cold for me,’” says Gracheva, whose study appears December 19 in the journal Cell Reports.

In fact, after the first experience with the cold platform, the mice never touched it again.

So, what accounts for the differences in behavior among mice, ground squirrels, and hamsters?

Utah Bears End Hibernation Early. That Could Be a Problem.

Warm weather in southeastern Utahdrew hibernating bearsout of their dens too early.

Originally Gracheva and her colleagues hypothesized that perhaps hibernators have fewer cold-sensing cells in their nervous system. Instead, after dissecting some of the animals’ spines, the team found that squirrels and hamsters have around the same number of these cells—it’s just that their sensitivity to cold seems to be turned way down.

“They may feel the cold a little bit, but my speculation is that maybe they just don’t care,” she says.

For hibernators, tolerating cold is more than a good party trick.

To survive winter and lack of food, these animals go through an array of physiological changes, such as reducing their body temperature, heart rate, and breathing rate.

Therefore, it’s not so surprising that hibernators would have evolved tricks hidden inside their central nervous system that help their bodies cope with cold.

But according to Brian Barnes, director of the Institute of Arctic Biology at the University of Alaska-Fairbanks, the loss of sensitivity the new paper describes is interesting for another reason—sensing cold is one of the ways these animals’ bodies knows it’s time to start hibernating.

“It is a surprise that the feedback about body temperature from nerves in the spine would not also be important to an animal as it cools down,” says Barnes, who studies hibernation in Arctic ground squirrels and bears.

Barnes cautions that there may be limits to these hibernator superpowers.

As temperatures plunge below freezing, he suspects the hibernators’ brains would start firing more or less as normal.

That’s when it comes in handy to have a heavy fur coat, body fat, and an insulated burrow.

Gracheva hopes to dig deeper into the mysteries of hibernation with her next project, which aims to take the genes responsible for cold tolerance in squirrels and hamsters and insert them into mice.

She adds the ongoing research may lead to medical advances for people, such as reversing the effects of cold-induced neuropathy or reducing damage to transplant organs stored on ice.

“Extremophiles [like squirrels and hamsters] can teach us a lot about biology in general,” she says,” and maybe even benefit human society.”

This article was first published by National Geographic on 19 Dec 2017.