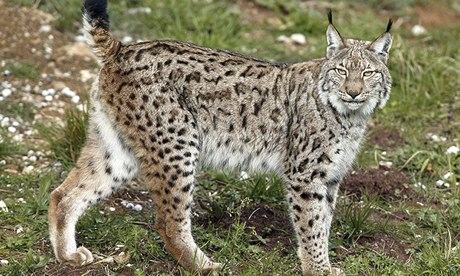 If Scotland needs a lesson on how to save an endangered feline, it need only look to the little town of Santa Elena, in Andalucía, Spain. Biologists there have overseen a remarkable conservation enterprise: the Olivilla captive breeding centre for the Iberian lynx. Dozens of these distinctive, beautiful creatures have been bred here, watched over by staff working in a control room that has enough television monitors to do justice to a particle accelerator. This is cat care at its most sophisticated.

Adult lynxes, which are about a metre long and weigh around 10kg – twice the size of a wildcat – have been reintroduced to the surrounding hills. Ten years ago, there were fewer than 100 Iberian lynxes left on the planet. Habitat destruction, loss of prey and indiscriminate trapping by landowners was propelling Lynx pardinus towards extinction. Today there are at least 300 of them, and their numbers continue to rise. Call it the Lynx effect.

The implication is clear. Endangered felines can be saved – although we should be under no illusions about the cost involved. As lynx conservationists explained during my visit to Santa Elena, around £30m was spent setting up the project, money raised mostly by the Andalucían regional government, and which funds captive breeding and also pays for teams of energetic young conservationists to trap and release animals in areas around the town.

It is a price tag that makes Scottish conservationists wince. At present, a mere £200,000 has been pledged by Scottish Natural Heritage to save the Highland wildcat.

A promise to seek Heritage Lottery funding has also been made, but no serious money has been talked about for a captive breeding programme, which many believe may be critical to wildcat recovery plans.

Nor does the Scottish wildcat help its own cause. It is nocturnal, shy and extremely elusive. Assessing its status is therefore difficult. Only a few dozen may be left – or there could be as many as a few hundred. Nor is it easy to determine how much hybridisation has occurred between the Scottish wildcat, a close relative of the European wildcat, and the domestic tabby, a cousin of the near-eastern wildcat, a separate subspecies. Scottish National Heritage proposes that this data be uncovered as a matter of priority. Other conservationists argue that time is now too short for that. Only a captive breeding programme can save the wildcat now, they say. Others retort that such actions, based on scanty data, could do more harm than good to the wildcat.

In fact, it is clear conservation groups cannot do this alone. They need proper government support to trace and trap Highland wildcats, to build breeding centres, and to breed them in facilities that are clean and safe. Areas for reintroduction will have to be home to sufficient prey to sustain a wildcat population, while local landowners need to be happy about their presence nearby. The lesson from Andalucía suggests this can be done – but only by spending millions.

Unfortunately the Scottish government has shown no sign that it understands the proper dimensions of the wildlife crisis that it faces, although it is the only agency that possesses the resources – and the jurisdiction – to save the Highland wildcat. Andalucía decided it was worth spending millions to save the Iberian lynx. Scotland’s leaders need to decide, very quickly, if they want to follow suit.

This article was written by Robin McKie for the Guardian.