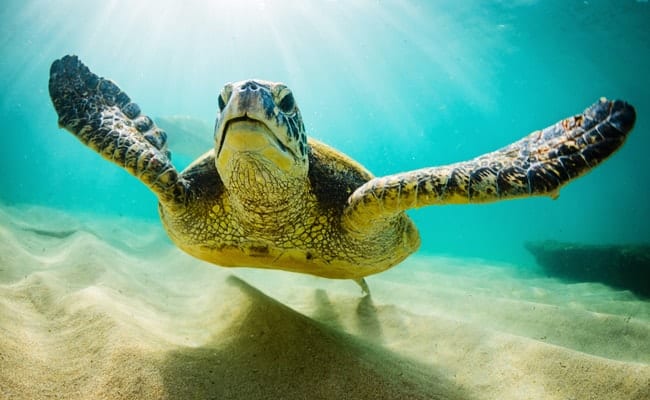 As the world’s largest cruise line, Carnival Cruise Lines has the power to help stop the suffering of endangered green sea turtles.

A tourist facility in the Cayman Islands, The Cayman Turtle Centre: Island Wildlife Encounter, has been on the radar for years over concerns about how it’s mistreating its resident sea turtles. The facility allegedly keeps thousands of otherwise solitary and far-ranging sea turtles in cramped, overcrowded and unsanitary conditions that have resulted in abnormal behavior, serious health and genetic issues, thousands of deaths from disease, and even aggression and cannibalism.

According to World Animal Protection, more than 200,000 people visit this facility annually, and an estimated three-quarters of those guests are passengers on Carnival Cruise Lines. As the world’s largest cruise line Carnival Cruise Lines could have a major impact if it stopped sending tourists there, but so far, despite being made aware of the problems, it’s refused to take any action.

In 2012, World Animal Protection released a shocking report outlining numerous problems at The Cayman Turtle Centre: Island Wildlife Encounter that range from cruelty and risks to guests to failing its conservation mandate, among other issues.

Sadly, not much has changed since then.

They turtles are also subjected to the stress of being repeatedly handled by visitors, which isn’t just a problem for turtles, it also poses a health risk to humans.

“The stress and injuries associated with the repeated handling these wild sea turtles by tourists is just the tip of the iceberg. Behind the scenes hundreds of sea turtles are crammed into overcrowded shallow tanks out of sight from the tourist view,” said Neil D’Cruze, senior wildlife advisor for World Animal Protection.

Last year, it was featured on the organization’s top 10 list of the cruelest wildlife attractions in the world. While it does release sea turtles, and boasts of 31,000 releases, there’s virtually no evidence that released sea turtles are surviving, or boosting local populations, or that there’s been any conservation benefit. Releases may even be having a harmful impact by introducing diseases and genetic defects to the population of wild sea turtles.

Although farming sea turtles for their meat is supposed to take the pressure off of wild sea turtles, there’s little evidence there’s a real demand for it locally, and concerns have been raised that tourists are artificially inflating it by choosing sea turtle meat simply because it’s being offered.

Even though the facility is largely subsidized by the government, it still relies heavily on tourists to stay in business. And Carnival Cruise Lines is helping tourists get there.

“This major cruise company is currently turning a blind eye to animal suffering on an alarming scale,” said D’Cruze.

Now, World Animal Protection is campaigning to get Carnival Cruise Lines to put the welfare of sea turtles over profits by asking it not to visit this facility, and hopes to see more changes locally that will benefit these endangered animals. While there have been some positive changes over the past few years, there’s still a long way to go.

“Ultimately we want to see the farm operate as a genuine rehabilitation and education centre, where endangered turtles are properly protected. These wild animals should not be handled by tourists or served up on a tourist plate as a novelty burger,” added D’Cruze.

For more info on how to help support this campaign, check out World Animal Protection, and check out animal-friendly tourism guide for alternative destinations.

There is simply no excuse for animal abuse and Carnival Cruise Lines must join the 21st century with their thinking and end their ties with this vile facility that compromises the well being of a noble species. Sea Turtles don’t deserve to live this way. Carnival could do more to end this cruel exploitation by posting the truth on their ship’s literature! People need to know that this is wrong rather than reconcile themselves to such an atrocity. Wildlife deserves our respect, not our exploitation!

For decades the Cayman Islands has acted as a cloak for the smuggling of Turtle meat from elsewhere in other parts of the world. Companies can claim it’s legal sourced, ie. from the Cayman Islands, whereas it could have come from say Somalia perhaps. It goes on believe me.