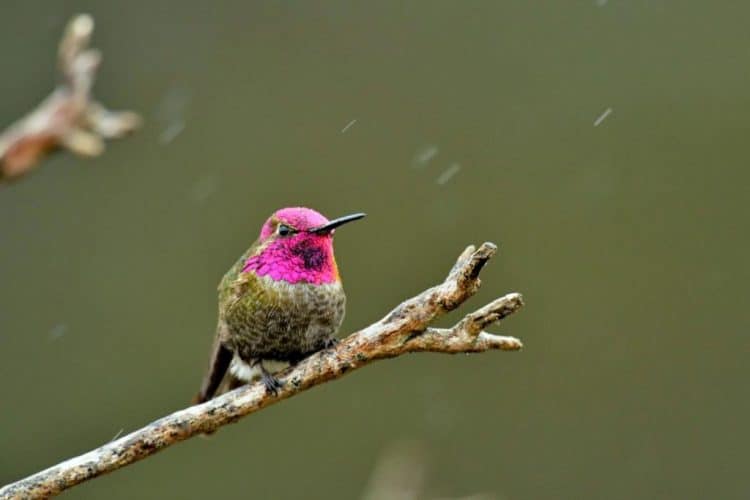 As the smallest birds on Earth, hummingbirds may seem frail—so it’s not surprising Donovan Nixon asked Weird Animal Question of the Week how they cope with winter.

Turns out these airborne jewels are as tough as diamonds.

In cold weather, hummingbird bodies enter into an “energy-conservation mode called torpor,” according to Oregon State ecologist Adam Hadley. Birds that stay north for the winter experience a nightly “mini-hibernation,” in which their 107-degree body temperatures can plummet to 48 degrees.

Heart rates also slow during torpor: The blue-throated hummingbird’s heart rate, for instance, drops from 1,260 beats per minute to 50 to 180 beats.

Hummingbirds can feed in chilly weather. Hadley has seen an Anna’s hummingbird visit his backyard bird feeder during a 28-degree day.

These tiny wonders are also moving farther north—they’ve been spotted in Vancouver, British Columbia, for instance—due to milder temperatures and an increase in hummingbird-friendly feeders and shrubs, he says.

Hummingbirds are strong and agile for their size. (The world’s smallest bird, the bee hummingbird of Cuba, is about 1.9 to 2.3 inches—about the size of a golf tee.)

If you’ve ever watched a hummingbird flit around like the golden snitch of Harry Potter fame, its easy to believe they have the highest metabolism of any animals after insects.

Hummingbirds are the only birds that can fly backward, thanks to a flight mechanism that is not simply “flapping but also involves a lot of wing rotation,” Hadley says.

They’re also “unique among birds in their flying efficiency,” Hadley says, “being able to invert their wings and generate lift from both the upstroke and downstroke similar to insects.”

About 30 percent of their body mass is pectoral muscle, Matt Betts, a forest ecologist at Oregon State, adds via email.

Hummingbirds show off their aerial skills in both love and war, fighting off rivals and courting mates.

Male Anna’s hummingbirds, for instance, “will climb up to 130 feet in the air and do this dive bomb,” during which they’ll spread their tail feathers to make a chirping noise before arcing back up to the same height, Hadley says.

Some males put on impressive tail-feather displays, like the spatuletail; others, like Costa’s and calliope hummingbirds, flare out brightly colored throat gorgets, which change from dull to dazzling in different lights.

Like many birds, hummingbirds are also important pollinators. In Costa Rica, only the green hermit or violet sabrewing hummingbird can make the plant Heliconias tortuosa germinate. By bringing pollen from far away, these birds help make the plants they pollinate more genetically diverse and thus healthier.

In more tropical areas, Hadley says, hummingbirds nests are more cone-shaped, and made to fit under plant leaves that shield them from rain.

By the way, hummingbirds get their name from the sound made by their superfast wingbeats.

We thought it was because they have a bad memory for lyrics. Hmmm.

This article was first published by National Geographic on 07 Jan 2017.